After 80 years, SVG Cadets get regimental colours, but is still homeless 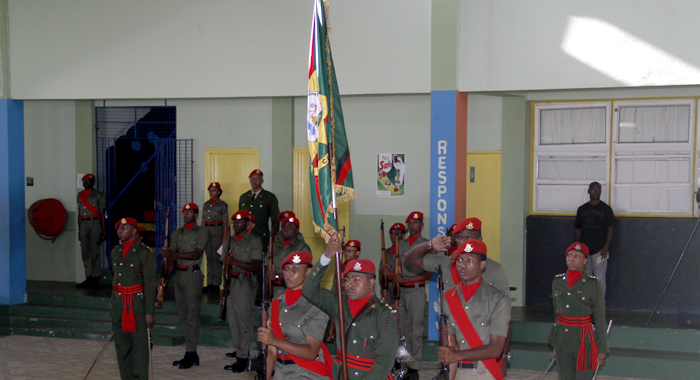 The SVG Cadet Force Regimental Colours on parade after their consecration on July 23. (iWN photo)

After 80 years of existence, the St. Vincent and the Grenadines Cadet Force in July consecrated its regimental colours during an event at Bethel High School, during its annual training camp.

But while the institution celebrated the consecration and presentation of its regimental colours, Commandant of the Cadet Force, Lieutenant Colonel Dwight D. Lewis noted that after eight decades, the force is still without a home.

“In ancient times, the army virtually defended their colours and if the opposite forces captured their colours, they were defeated, essentially. So, the tradition grew out of that.”

The consecration ceremony will be presided over by The Rt. Reverend Bishop Leopold Friday and the Colours were presented to the Cadet Force by Governor General Sir Frederick Ballantyne.

Lewis told iWitness News that the event was symbolic, adding that “colours are very revered, the fact that they are consecrated, they are deemed to be handed over by the Sovereign, hence the reason why the Governor General presented us with the colours”.

On parade, the Cadet Force will carry its colours, persons will stand to the colours and salute the colours when they pass.

“So, it’s very significant and symbolic to the force to have colours.”

Regimental colours would trace history and tradition of a military organisation, and Lewis said that is what the Cadet Force tried to do with its colours.

He said the concept has been around for about five years.

In the middle of the regimental colours is the badge, which is the Star of David with the Coat of Arms in the centre and the motto, “Patriotism, Discipline, Honour” in Latin.

The green and yellow signify the Grammar School, which is the origin of the cadet movement.

In the centre, there is a criss-crossing red and black.

“That was introduced when we moved to become a national organisation for secondary school. At that time, red and black were the national colours of St. Vincent and the Grenadines. We stick with the red and black even after independence and military organisations do that. So that’s part of our tradition,” Lewis told iWitness News.

The crisscrossing symbolises the transition from the Grammar School and the recent expansion. The Cadet Force is now in almost every secondary school in St. Vincent and has a unit in Bequia.

Regarding a home for the Cadet Force,

Lewis pointed out that the organisation is a state-owned one that is also funded by the state.

“So it is essentially the only state-owned youth organisation and that point is fundamental. So, the onus is on the state to assist us in terms of a headquarters.”

He said the organisation has been struggling for years.

“After we moved from the Grammar School, basically, we have not had a home, per se, where we can do most of the training. “

He said that they use classrooms at the schools where they meet for training and the grounds for drills.

“But there is a lot more to it. There is no band room,” he said, adding that they have a storeroom where the instruments are stored. On band training days, members have to tote instruments between the Grammar School, where training is held, and the band room, located some distance away.

“And that, in itself, is a very cumbersome sort of arrangement,” Lewis told iWitness News.

The Cadet Force, however, has a state-funded office in the Baynes Brothers Building in Kingstown for about 14 years.

Lewis, however, said that without a home, there are a lot of things that he Force should be doing that it isn’t.

“For example, our music programme, we basically do that on Saturdays because of the absence of a place where we can conduct that. To develop good musicians, you need to train on a more regular basis.”

He said the marine unit does a lot of training, both theoretical and practical, which has been affected.

Among the persons attending the consecration and presentation ceremony on July 23 was Major St. Clair Leacock, who was Commandant of the Cadet Force from 1973 to 1985.

Leacock, an opposition lawmaker who is Member of Parliament for Central Kingstown, said he agrees with the commandant “wholeheartedly” that the Cadet Force needs a home.

“I know it has been an issue for quite some time now, even in my period,” Leacock told iWitness News after the ceremony.

“It is a matter of the government voting properly for their upkeep and maintenance,” he said, adding, “If as we believe in the preventative aspect of development and in the importance of leadership training and development and alternative lifestyle, the Cadet Force is as good as it gets.”

He further noted the age of the Cadet Force, saying, “Eighty years is not 80 days and not many organisations go that long and the longevity and discipline it instils tells you it is deserving of national attention,” he said.

One reply on “After 80 years, SVG Cadets get regimental colours, but is still homeless”