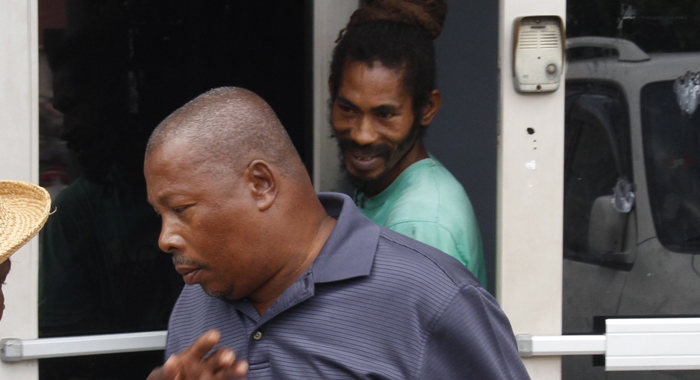 The virtual complainant, Andrew Soleyn, forefront, and his brother, Jason Soleyn, the accused, leave court after the proceedings on Monday. (iWN photo)

A man who was charged with chopping down his brother’s wax apple tree was on Monday reprimanded and discharged.

Jason Soleyn pleaded to a charge that between Dec. 15 and 16, 2016 he destroyed a wax apple tree valued EC$500, the property of his brother, Andrew Soleyn, of Paul Over, intending to destroy such property.

The court heard that the siblings live in houses on the same plot of land and Andrew planted the wax apple tree between both houses, but closer to Jason’s house.

The two had a disagreement and on Dec. 16, 2016, Andrew discovered that the wax apple tree had been felled and reported the matter to the police, who arrested and charged his brother.

But after Jason pleaded guilty at the Kingstown’s magistrate’s Court on Monday, Prosecutor, Station Sergeant of Police Elgin Richards told the court that the virtual complainant had indicated certain things and, therefore, the Crown was recommending that the accused be reprimanded and discharged.

Andrew, when called to the dock, told the court that he was not seeking compensation for the fruit tree.

“No. He is my brother. I love him,” Andrew told Magistrate Bertie Pompey, when asked if he wanted compensation for the fruit tree.

“But you didn’t know that when you went to the [police station]?” said Pompey, a former police chief.

“When did he become your brother? Today?” the magistrate further commented, rhetorically, before reprimanding and discharging Jason.