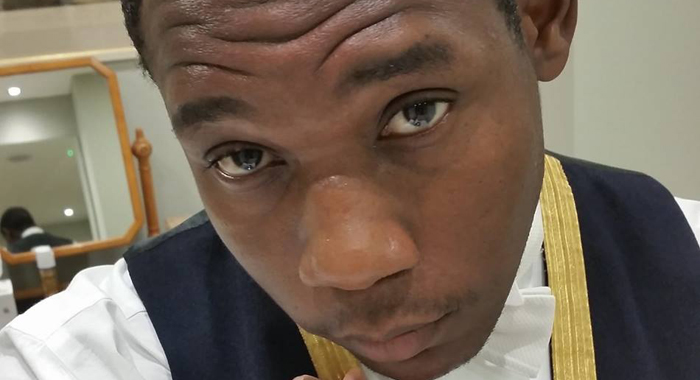 A Vincentian young man who successfully completed a six-week hospitality internship at Buckingham Palace has accepted full time employment there, even as he keeps his eyes on his dream of becoming an engineer with the Royal Navy.

St. Vincent and the Grenadines’ Minister of Foreign Affairs, Sir Louis Straker made the announcement to Parliament on Monday.

He read a letter from St. Vincent and the Grenadines’ High Commissioner to the United Kingdom, Cenio Lewis, regarding the exploits of 25-year-old Vincentian, Moriba O’Garro.

Lewis said that during the Royal Household Hospitality Scholarship Programme, O’Garro “so impressed the Buckingham Palace officials responsible for the programme that he has been offered permanent employment at Buckingham Palace”.

Lewis pointed out that O’Garro has accepted the employment but had taken the Royal Navy test while the Royal Navy recruiters were in St. Vincent and the Grenadines last year.

During the early part of his training, the palace officials were considering making O’Garro an offer of employment, Lewis said in his dispatch.

“He, clearly, is career-minded and I will do my best to assist his naval career if, in the future, he still wishes to go that route,” the diplomat said in the letter to his boss.

The letter said that O’Garro has informed the palace of his “naval intentions” and has said that a palace official, a former vice-admiral in the Royal Navy, who is now the master of the household at Buckingham Palace, intends to write to the navy to support his application to join the Royal Navy at some point in the future.

Last November, Prince Harry announced that nine new Royal Household Hospitality Scholarships would be given, one each from the nine Caribbean countries that still maintains the Queen as head of state.

Successful applicants were attached to the Master of the Household’s department in the planning and delivery of all entertaining hosted by The Queen and senior members of The Royal Family.

This includes catering in the Royal Kitchen, housekeeping and caring for artwork and furnishings and front-of-house duties such as greeting guests and serving food and drinks.

Each scholar was expected to learn new techniques and received a certificate of completion from the Royal Household at the end of the six-week placement.

They also undertook a six-week project to advance their skills in their chosen area of expertise, This ranging from learning complex chocolate and sugar craft, performing duties for Her Majesty’s guests at Windsor Castle during Royal Ascot week or shadowing the service team at official and private events during this busy period.

Commenting on the development, Sir Louis told Parliament that O’Garro is a product of the education revolution.

“Just imagine that. A young man — I know his grandparents, his father was a fisherman, his mother was a fish vendor and she went from Buccament to Vermont with the exchange of fish for ground provision and later years, they went to England.

“But this young man is not a product of the city of Kingstown, not from the elite in this country, those in the upper class or even in the middle class, but one from my own category of people. [His] mother worked also on the estate at Cane Grove and Pembroke.

“That you have, maybe for the very first time, a young man going from Buccament Bay to Buckingham Palace, this is indeed a great achievement. And this is what education can do for our young people.”

Straker said it gives him “great satisfaction, great pride, great joy, great happiness to see that one who has come from the humble folks in the rural area, can now become a permanent employee of Buckingham Palace.

“I am sure that my colleagues join me on both sides of the house in wishing him well as he goes on, whether in the palace or in the navy as an engineer. This is what our young people should emulate. This is what we hope our young people would take advantage of, not only here in St. Vincent, but throughout the world.”

And, opposition senator, Jules Ferdinand congratulated O’Garro on his employment.

Ferdinand recalled that in Nelson Mandela’s autobiography, he said that it is through education that the child of a farmer could become the president of a great nation and the son of a coal miner could own the mine.

“And so, I endorse what you have said, Sir Louis, I think it was very good that you have shared it the way you have done and I just trust that as our young people listen to and read about this kind of localized example that they too would know that it doesn’t matter where you were born, it doesn’t matter the colour of your skin, it doesn’t matter your ethnicity or the texture of your hair, what matters is that you give your best effort not only in terms of your aspirations for education but also your pursuit of proper attitude,” he said.

4 replies on “Youth moves from Buccament Bay to Buckingham Palace”