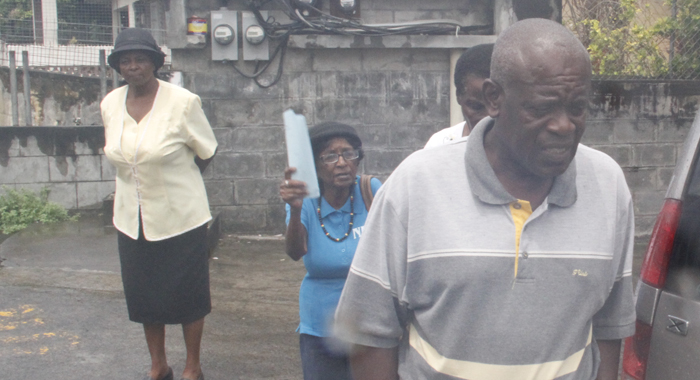 The accused, Morris Prescott, right, is heckled by a member of the friendly society as he leaves court on Tuesday (iWN photo)

After hearing the damning testimony of three witnesses for the Crown, prosecutor Station Sergeant of Police Elgin Richards on Tuesday asked defence counsel Arthur Williams if he would like the charges to be put, again, to his client, Morris Prescott.

The defence counsel rejected the offer and the prosecution asked for an adjournment until Wednesday in the case in which Prescott is charged with stealing some EC$83,000 from the Vermont Wise and Prudent Friendly Society in 2016, when he was its president.

After an eight-month delay, the trail got underway on Tuesday at the Serious Offences Court in Kingstown, before Chief Magistrate Rechanne Browne-Matthias.

It quickly became clear that not only had Prescott — a teacher, justice of the peace, and senior member of the St. Vincent and the Grenadines Cadet Force — admitted to the executive of the Friendly Society that he had “used and abused” the money, he had signed at least two documents accepting responsibility for the funds and committing to repaying them.

The first witness called by the Crown was Ruby Mattis, secretary-treasurer of the burial society, which was founded in 1942.

The 72-year-old Vermont resident, who originally was only the secretary of the society, also took on the treasurer’s duties when her husband died in 2007.

Mattis, who is also a justice of the peace, told the court that Prescott has been president of the society for about 30 years before the charges were brought against him.

She said that every Wednesday, the five-member executive of the society, which also included Alvina Myers, Joan Browne, and Mona Prescott, Morris’ wife, would gather to receive members’ contributions.

Mattis said that members generally contributed a minimum of EC$5, but some would pay less, if that was all that they had.

At the end the day’s activities, the five members would remain around the table where they would deduct the expenses from the day’s intake.

If a member of the society had died, they would also deduct the death benefit amount from the receipt then turn over the remaining funds to Mr. Prescott for banking.

If he was not present on a particular Wednesday, the money would be given to his wife to take to him, Mattis told the court.

She further said that the society was always run based on trust and for as long as she was a member of the executive, no one ever signed to say how much money was received.

However, they kept two copies of the records — with Prescott having one, and Mattis the other — in which the records were entered on the day when the society operated.

Mattis told the court that each December, the executive would make the requisite calculations, withdrawing from each member’s account an amount according to the number of death benefits paid out that year.

They would retain in the account just over EC$3 to keep the account active and would pay out the remainder to members.

In December 2016, Mattis and Prescott were supposed to go to the society’s bank in Kingstown to make the requisite withdrawal to make the payments to members.

However, on the day agreed, there was no sign of the society’s president and when she called his house, he was not at home.

The following day, Mattis called Prescott to inquire about when they would pay the members of the society and he told her that he would like talk to her.

“He said, ‘Miss Mattis, I have made some bad mistakes and I get myself caught up,’” the witness quoted Prescott as saying.

“I said to him, ‘Are you on drugs?’ and he said ‘No.’ That was the only thing that could come to my mind at the time,” Mattis further told the court.

“I said, ‘Where is the people’s money?’ He said, ‘I can’t go into any explanation, any details’ — something like that.

Mattis told the court that Prescott told her that he was looking for some funds to repay the money.”

The witness said that she was advised to report the matter to the Financial Service Authority (FSA), which she did the following day, Dec. 19, 2016.

Based on the advice of the FSA, the five-member executive of the friendly society had a meeting at Mattis’ house around 5 p.m. on Dec. 19, 2016.

Mattis said that after a prayer was said, she told Prescott that the meeting was called to inquire into the society’s funds.

Prescott, however, maintained that he couldn’t go into details. Mattis told the court that Prescott further told the meeting that he took full responsibility for the funds and that he had betrayed the people’s trust and promised to repay the money, telling them that he was trying to get a loan.

“He said the money that was given to him was misused and abused.”

At this point, Myers asked Prescott how much how much money he had banked and he said he had made deposits once or twice during 2016.

Mattis told the court that during the meetings with Prescott on Dec. 18 and 19, she asked about the passbook for the society’s account but Prescott failed to produce it.

She said that she took contemporaneous notes of the proceedings of the meetings at her house and asked Prescott to sign them at the end of the meeting.

On Dec. 20, 2016, Mattis, Myers and Prescott visited the FSA’s office where Mattis read the notes from the meeting the previous day. The FSA official asked Prescott if he knew that he had committed a serious crime and he said yes, adding that he was looking for some money to repay to the society, Mattis told the court.

Prescott then handed over the bank account to the two other executive members of the banking society and left, saying he was going to the credit union.

Mattis told the court that the burial society is not in the habit of granting loan, and added that if Prescott had approached the society for a loan she would not have supported it.

She further told the court that Prescott and another man, Stephenson where signatories to the society’s bank account until Stephenson died in September 2016.

Mattis said she was then under the impression that she was made a signatory. However, in fact, Prescott remained the only signatory to the account. “So I was being fooled,” Mattis told the court.

During cross examination, Mattis told the court that she used to keep the society’s bank account until May 2015, when there was a burglary at her house and she asked the executive to appoint someone else to be custodian of the passbook.

The executive entrusted the passbook to Prescott and from then on, he was responsible for banking the money.

Mattis admitted that Prescott has repaid EC$10,000 to the friendly society but, in response to the defence counsel’s question, said he could not say for what period those funds were.

She said that after Prescott had taken over responsibility for the bankbook, she inquired intermittently about how the banking was going and he said “good”.

“That was good for you?” Williams asked the witness.

She responded in the affirmative, telling the court, “Because the society is based on trust — from way back.”

Mattis told the court that while there was no custom of signing books to vouch for amounts, the society kept two copies of the record to corroborate each other.

She said when she inquired of Prescott about his copy, he said he had stopped keeping it a long time ago.

“All the time I was doing it, there was no corruption, no mistake,” she said, and reiterated the decision taken by the executive after the burglary at her house.

“I am not an auditor, I am not an accountant but I did it to the best of my ability,” she told the court.

“We trusted Mr Prescott, thinking that everything was OK. We had no suspicion that anything was going wrong,” she said.

The second witness to testify on Tuesday was Alvina Myers, an executive member, who said her role on Wednesday was to write up in passbooks the amount that members were paying into the society.

The 55-year-old woman said she has been a member of the society since she was about 8 years old.

Myers corroborated Mattis’ account about what happens to the money after it is collected and the amounts for expenses and death benefits are withdrawn.

She told the court that at the Dec. 19, 2016 meeting at Mattis’ house, she told Prescott that members of the society are looking for their money and if he used it he should try to get it back.

She said that during the meeting with the FSA, when Mattis read the note from the previous day’s meeting, Prescott said that he would repay the money on Dec. 29, 2016 and she, he and Mattis signed an agreement in this regard.

During cross-examination, Myers said that the friendly society is operated based on trust, adding that because of what happened with Prescott, no one trusts him anymore.

She reposed much confidence in Prescott’s wife not to take the money that was given to her to convey to him.

When told by the defence counsel if she agreed that Prescott had merely accepted responsibility for the money rather than said he had used it, Myers maintained that the former head of the society had said he had used and abused the money.

“If I don’t take something, I won’t take full responsibility for it,” she said.

Neva Cordice of Campden Park, an examiner at the FSA who is responsible for regulating friendly societies, told the court that she knew Prescott from when they were teachers.

Cordice told the court that she met with Mattis on Dec. 19, 2016 and then with Prescott, Mattis and Myers the following day.

The FSA official said that when the Executive Director of the FSA, Sharda Bollers, questioned Prescott, he said that he had made a mistake, took full responsibility and was working to repay the money.

Cordice said she represented the FSA at a Dec. 23, 2016 meeting attended by Prescott, the executive of the friendly society and its members at the Retreat Community Centre.

The FSA official said that Prescott told the meeting that he took full responsibility for the society’s money.

When asked by members what he had done with the money, he said he used it and was working on a loan to repay the society, Cordice told the court.

She further told the court that the FSA had examined the society’s records and had seen members’ contributions and monies that the society had paid out.

During cross-examination, Cordice said the fact that Prescott had repaid EC$10,000 was a good thing.

But when asked by defence counsel Williams if she thinks it’s a good thing to give Prescott a chance to repay the money, Cordice said that is not her decision to make.

After hearing the testimony of the witnesses, Richards rose and asked Williams if he would like the charge to be put to his client again, but the defence counsel said no.

The trial continues on Wednesday morning at 9 a.m.

(Watch below a video from our initial reporting on the development last December.)