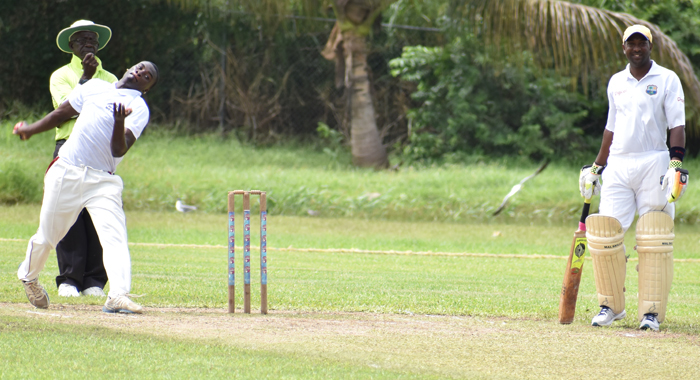 Binnington Stapleton got the early breakthrough.

Providence Electronic Solutions North Leeward took a giant step into the annals of local cricket by clinching the NLA First Division title with a compelling 7-wicket win over Ruddy’s Electrical Unique Warriors in the final at the Sion Hill Playing Field on Sunday.

The North Leeward cricketers, who had entertained hopes of competing at the Premier Division level for a number of years, when offered that opportunity with both gloves with an imperious batting display that was as ominous as it was refreshing.

However, there are those who have expressed some doubt as to if they would be able to tailor their game from the limited overs mode to the requirements of the two-day Premier Division format.

Operations Coordinator for the team, Jules Anthony, whose pre-match smile had grown into grin of satisfaction at the end, is confident that the players will adjust their game to suit the format.

“We have the talent and all the players need to do now is to make that adjustment and see their role as a team member regardless of which area of North Leeward they are from,” Anthony said.

He said that there is enough talent in the community to sustain the team and with the Under 15 set up there is an excellent feeder programme.

On a day when local cricket returned to the 1990s when a “North Leeward Posse” making up all ages and covering several generations of the Anthonys — minus Marc — descended on a cricket venue to lend support to their team. And they were not disappointed, for set target of 185 for and a spot in the Premier Division, they chased it down with ruthless efficiency.

The openers, Elron Lewis and Vidal Edwards, set the platform with a half-century opening stand as the former set about the bowling with predatory delight. The pair had added 55 for the first wicket before Edwards (5) went.

Lewis, who had hit the ball with impressive power and timing, added a further 40 with Shaman Hooper before he was dismissed for 54 at 95/2.

Michael Joseph (1) went at 104/3 to send some nervous moments into the camp. However, the talented Hooper (59*), resembling a “batting stealth bomber”, blew the opponents out of the water with an inspiring unbeaten half century as he added an unbroken 83 with Ronique Laborde (36*) to see their team home.

The winning run came with the usual North Leeward-like celebration with the bar which was present from early, picking up trade as the dollars from “up so, up so” moved from the underground to mainstream. It also saw a few “ole timers” who were “going up” the ole time way and chasing with water, increasing the lip to glass tempo.

Earlier, Ruddy’s Electrical Unique Warriors, who won the toss and elected to bat, were held in close check by the North Leeward bowlers who, despite sending down 36 wides and 3 no-balls, found good areas on a pitch offering some assistance.

The innings got off to the worst of starts when the big-hitting Christopher Campbell (0) had his offstump uprooted by Binnington Stapleton in the first over — a loss they never overcame as they quickly slipped to 18/3.

William “Bill” Edwards (40), using his experience, stemmed the fall with a patient innings as he set about rebuilding the innings. He, however, was unable to increase the run rate as he took all of 99 balls for his runs, which included one four and three sixes.

Joelano Neil (47) and Leon Samuel (30) also contributed useful runs but with the others failing to augment the total it looked insufficient.

It always would have required a good or even a special performance from the Unique Warriors bowlers to give their team a chance of victory, but the early onslaught by Lewis put paid to that prospect.

In the end, it was the chance for an extra verse to Kojah’s “It is finished”: “North Leeward sharing plenty licks with fours and sixes we win by seven wickets”.

In the end, some left on a high in their many modes of transportation, “Guilty” as well, to confirm the good news which had most likely preceded their arrival back to the North.