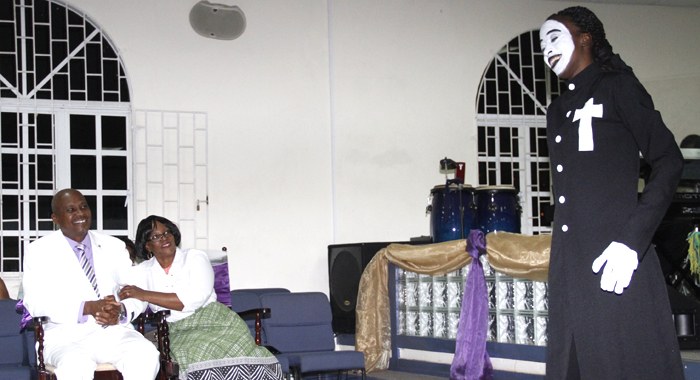 Dr. George and Elsie Frederick watch as Samantha Diamond performs a tribute to them on Sunday. (iWN photo)

When Grenada-born Elsie Frederick decided to move to St. Vincent with her Vincentian husband, George Frederick in 1978, she had planned to spend one year.

She was very much involved in her church and in her secular job and had plans for them to return to the Spice Isle after the brief sabbatical.

“And it is now 39 years,” she said on Sunday at a service at Faith Temple in New Montrose, where the Pentecostal Church in St. Vincent and the Grenadines celebrated the couple’s 50th anniversary of Christian ministry.

She said she was “very humbled to have been here this evening to hear all that was said and I want to say thank you very much. I can’t say it in other words but thank you…

“You have been a blessing to us. Not just we doing things for you but you have blessed us in innumerable ways. Forget about the negatives… God has been good to us, through you and I want to say thanks very much,” she declared, and later relieved her husband of the microphone to add that they recently celebrated 45 years of marriage.

At the service, the Pentecostal Church and their guests celebrated a couple whom they say has served with “generosity and humility” and has not been parochial or partisan in their ministry.

They were also credited with contributing significantly to the growth of the Pentecostal faith in St. Vincent and the Grenadines (SVG) over the past 40 years.

“Dr. George and Elsie are the quintessence of extraordinary generosity,” said Bishop Sonny Williams, presiding bishop of the Pentecostal Assembly of the West Indies, SVG.

“We thank you for answering the call to return — well in the case of Dr. Frederick — to return to his homeland and for his wonderful lover to have accompanied him,” he said of Frederick, who began his ministry in Grenada, where he also met his wife.

Williams said that Mr. Frederick’s return to his homeland has changed PAWI St. Vincent and the Grenadines and, perhaps, the Christian community in SVG.

The bishop said that what was expressed in Sunday’s service, speaks to the Fredericks’ generosity.

He said that some Christians, including pastors, sometimes struggle with humility.

Williams said the church is attempting to change some of the cultural norms in the country.

“All of us will die some day, but we want you, before you get there, to know what we were thinking about you. We want you to hear it while you could appreciate it. We want what we think about you to motivate you to go to the next man. On behalf of all of us, the district executive, all the pastors, their wives, every member of PAWI, thank you. George and Elsie, thank you so much. You have been exemplary. You have been our mentors. Thank you.”

Speaking at the event, Reynold Murray, president of the Association of Evangelical Churches, SVG said that he met Mr. Frederick about 43 years ago, adding that Mr. Frederick helped him to realise that Christianity was not just about formality and discipline as was the case “in the old school”.

“I saw someone who bridged the gap and showed you that Christianity was real life. You could enjoy yourself and serve God.”

Murray said that Frederick may not have known that he had been admiring him over the 40 years that would follow.

“When we wanted to kill the bill, he was there,” Murray said, adding that Frederick was also there when there was protest against telecommunications provider, Cable and Wireless.

“George, you have been the epitome of what a real Christian should be and I really would like to be able to follow you.”

Murray said that 15 years ago, he took over the pastorate of Revival Centre Ministries from an elderly pastor from a different school of thought and he knew there had to be changes. Murray said that he invited Frederick to talk to the congregation for a week about changes.

He thanked Mr. Frederick, on behalf of the Evangelical Association, for his many years of service.

“You have been a stalwart for that institution,” Murray said, adding that while the rear engine on a train is only used after a train gets to its destination, when outside of Mr. Frederick’s leadership it seems that the front engine wasn’t working, Mr. Frederick had a way of starting up the one in the rear.

“Unusual. A train shouldn’t be pushed from the back. It should be led from the front. But when the front didn’t seem to work, George has a way of pushing it from the back,” Murray said.

“You have really been a light to our young Vincentian men and if anyone is looking for an example, someone to emulate, I recommend to you George Frederick.”

Prime Minister Ralph Gonsalves, in delivering congratulatory remarks, noted that the census in 1970 showed that over 75 per cent of the people were associated with churches that did not believe in immersion water baptism.

The Anglican church had over 50 per cent of the people as members with the Methodist and Catholics having another 20 per cent between them, the prime minister said.

He, noted, however, that the last census, conducted in 2012, showed that Anglican, Catholics and Methodists had 29 per cent of the Christian population.

Gonsalves said he mentioned this to give the context in which the Fredericks returned to St. Vincent.

“They have been toiling in the vineyard of the Lord, ministry, and they have made such a phenomenal impact on people’s lives,” the prime minister said to applause.

“That is why the census taker says that the single largest group of religious believers in this country is the group called Pentecostals, 28 per cent,” he said, adding that including evangelicals, the number is 40 per cent.

“So that their extraordinary work would not have been accomplished had it not been for the spirit of God igniting the population to be led by them in God’s name. And while we honour them, we give praise to Almighty God and at the same time, give tremendous credit to ordinary persons who responded.”

The prime minister, however, noted that the Christian ministry has to be sustained, adding that it is an on-going struggle.

He noted that for things to be continually good, one has to keep at it, pointing out that on a Sunday, persons spread palm leaves so that Jesus Christ could pass, but on the Friday, they were shouting ‘crucify him’.

The prime minister said he has listened to Frederick on a lot of subjects and from time to time has one-on-one discussions with him, including last week, when Raquel, one of his daughters, was also present.

Gonsalves also noted the strength of secular influence, pointing out that a soca singer, during a performance when it is raining said “root like a hog and sensible people throw themselves down on the ground and start to root.”

In another case, the artiste told patrons to throw their shoe in the air “and when they finish they can’t find them, they going home barefoot,” Gonsalves said.

The prime minister said this “is to show you the power of what you have to conquer but yet not to isolate that. To embrace it for the purpose of the ministry, which is what George Frederick has done.”

In his sermonette, “Appreciating Our Own”, Rev. Stephen Ollivierre, assistant district presiding bishop of PAWI, SVG, said: “We must appreciate those who labour among us, but not all pastors feel appreciated.”

He said a survey done in the United States found that typical pastor feels that no one cares about him and his development, and 83 per cent of pastors try to comfort themselves instead of seeking outside help.”

“I am here to let you know today, we need to appreciate our own.”

Ollivierre cited Proverbs 3:27 — Do not withhold good from those to whom it is due, when it is in your power to act — saying he knows that it can be applied in many situations.”

The cleric said that sometimes persons hold back from giving people what they really deserve, sometimes because their contribution is not valued or taken for granted.

“And so often we see with when we have funerals and people are there carrying the most expensive flowers, words they utter that they never said to the person while they were alive. It is a sad thing.”

The bishop further said that some people love too much their money and material possessions, and when urged to give, ask who gives to them.

Ollivierre said that 1 Thessalonians 5:12-13 speaks to recognising those who labour.

“And when it talks about labour, those who toil in proclaiming and promoting the kingdom of Jesus Christ.”

He said that when the Fredericks were in SVG at the time, maybe they would decide to migrate or may even die.

“We thank you for this privilege that we can say to how much we appreciate what you have done in this district… Thank you Rev. Frederick and family for your work and your contribution to the St. Vincent and the Grenadines district… And I am thankful that I can say this rather than saying it over a box or watching you leave to fly somewhere.”

In his response, Mr. Frederick, known for his humour infused speeches and sermons, said that when he preached his first sermon on March 17, 1967, the woman who would become his wife — then still a teenager — and a few others were in charge of the church.

“Young men, literally watch and pray because God has people in store for you. Believe you me, I am not an easy person to go with and to have somebody to stand along with me… I am a visionary and sometimes everybody doesn’t follow and understand. Sometimes, you are going even without anybody following and this lady has stood [with me]. Independently, she can hold her own. God has been good to us.”

Frederick said that 18 months ago, he saw his wife coming down with a stroke and knew what could have happened, “but God, in his mercy, reversed it.

Among the special items at Sunday’s service was an “Ode to George Frederick” by Michael Peters. And while his recital was humorous and thoughtful, it was Samantha Diamond’s pantomime to Ray Boltz’s “Thank You for Giving to the Lord” that really moved the audience.

Diamond, toward the end of her performance, placed a crown on Mrs. Frederick’s head.

In his response at the service, Mr. Frederick said this was very appropriate, telling the audience, “because exactly, she is my queen”.