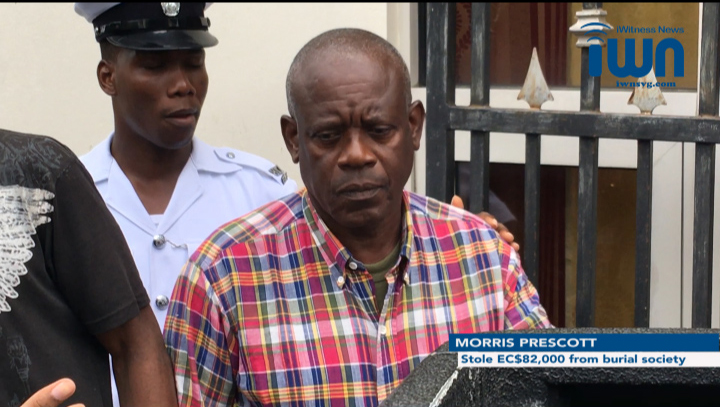 Morris Prescott, the 57-year-old former president of the Buccament Wise and Prudent Friendly Society, cried on Wednesday as he was sentenced to jail for stealing some EC$85,000 of the burial cooperative’s money.

“All circumstances considered, the aggravating and mitigating circumstances, the sterling plea of mitigation made by your counsel, the court finds that a custodial sentence will be appropriate in the circumstances,” Chief Magistrate Rechanne Browne-Matthias said during the sentencing at the Serious Offences Court in Kingstown.

“The court is of the view that a strong message of deterrence must be sent so that custodians of poor people’s money act diligently and prudently and exercise their fiduciary responsibilities to the best of their abilities,” she said then proceeded to hand down the sentences.

Prescott, a justice of the peace and teacher, was sentenced to 72 months in prison, but will only spend 12, as the sentences will run concurrently.

It was an embarrassing end to a nine-month saga that saw the man pleading not guilty twice to the charges, including once after the Crown had presented damning evidence again him one day earlier.

As she waited for Prescott to be escorted from the court to prison, Roberta Samuel, one of more than 1,700 members of the society, showed iWitness News her and her daughter’s society passbooks.

Samuel, who is commonly known as “Tiny” because of her stature, inquired of iWitness News about how the society might be able to recoup its money from Prescott.

The two passbooks, which were last written up late last year, showed that she could have withdrawn EC$328 from each account last December, but she is yet to collect the sums, as a consequence of Prescott’s crime.

As Prescott, handcuffed to another prisoner, was led away from court, Samuel stood near the police vehicle and asked him how she is going to get back her money.

The convicted thief said nothing.

He also made no reply when iWitness News asked him repeatedly if he would like to use the media to say something to the members of the society that he defrauded.

Samuel, a 72-year-old retiree who has been a member of the society since she was a 9-year-old, told iWitness News that she used her pension from the National Insurance Services to make contributions to the society.

She said that Prescott should have been sentenced to three or four years in jail.

Samuel said that the money was for her to celebrate Christmas, the biggest festival on the Vincentian calendar.

She has also washed her hands of the friendly society, which members earlier this year agreed to rebuild under new leadership.

Earlier, as Samuel waited for Prescott to be escorted front the courtroom, she began crying as she relayed — to no one in particular — the sacrifices she had made to make the contributions to the society and the importance of the end of year payments.

Some persons actually used the burial society as their bank to save for their Christmas celebrations.

At one point, she began to cry as she voiced frustration about how the society would get back its money.

Prescott’s road to prison was dramatic as his trial moved to its second and final day on Wednesday.

After hearing the testimony of the society’s secretary-treasurer, Ruby Mattis on Tuesday, prosecutor Station Sergeant of Police Elgin Richards told the court that the Crown wanted to amend nine of the charges against Prescott.

With the amendment, the amount of money Prescott was accused of stealing moved from EC$84,610.04 at his arraignment last December to EC$85,277.28.

Chief Magistrate Rechanne Browne-Matthias, then read the charges to Prescott, who again, pleaded not guilty.

His lawyer, Arthur Williams, had one day earlier rejected the prosecution’s offer, after hearing the damning evidence of three witnesses — that the charges be put to Prescott again.

The offer on Tuesday had come after the court heard the testimony of Alvina Myers, a member of the society’s executive, and Neva Cordice of the Financial Service Authority, the state agency that regulates cooperatives.

On Wednesday, after the charges were amended, Williams told the court that he would like Mattis to be recalled so that she could be further cross-examined, in light of the amended charges.

The matter was stood down to allow the witness, a retiree who lives in Vermont, to come to court.

However, about two hours later, just after Richards further informed the court that the Crown was withdrawing the charge in which Prescott was accused of withdrawing EC$3,000 from the society’s bank account, the defence counsel asked the prosecution to put the charges to Prescott again.

The accused man then pleaded guilty to 11 counts of theft.

In mitigation, Williams told the court that his client had encountered some financial difficulties and has used the money and had intended to repay it.

After the saga unfolded last year, Prescott paid EC$10,000 to the society but made no further payments to date.

But the prosecutor asked the court to impose a custodial sentence to the disgraced burial society president.

He said that some of the points raised in mitigation strengthened the prosecutor’s case that Prescott was in no position to repay the money to the society.

Richards further told the court that Prescott had betrayed the trust of the more than 1,700 members of the society.

In handing down sentence, the chief magistrate noted the points made in mitigation.

She said that mercy must be tempered with justice.

Browne-Matthias said that it is always necessary to match the sentence to the offence while keeping in mind the objective of sentencing.

“No indication was made that he has made any additional monthly payment to offset the sum remaining.”

She noted that Prescott is a teacher, justice of the peace and president of the friendly society.

“He held a position of trust in the society and the community,” adding that he has 1,700-plus members who paid their books weekly or monthly, according to their ability with the expectation that the fund accumulated within the year would be returned to ensure that Christmas is well spent.

The law states that a person found guilty of an offence under which Prescott was charged could receive a custodial sentence of up to two years in imprisonment, the chief magistrate said, adding that the court still has a discretion as to the range of that sentence.

“Had it not been for your counsel’s mitigation, Sir, your sentence would have been more severe,” Browne-Matthias told Prescott.