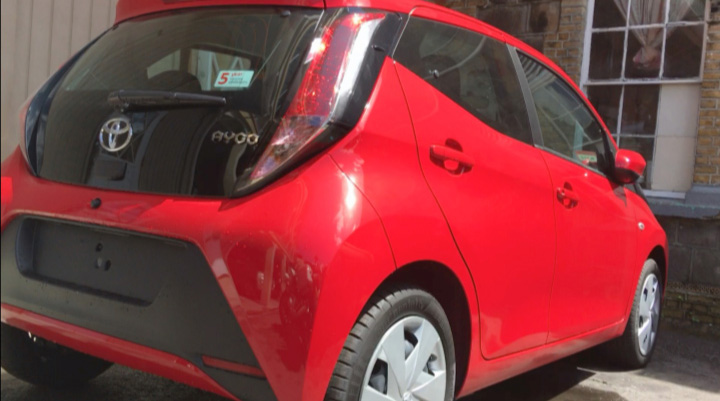 One of the five red cars, before they were repainted.

The Royal St. Vincent and the Grenadines Police Force has a paint job on its hands.

Some clients of lawyer Rene Baptiste, a former Minister of Culture under the Unity Labour Party (ULP) administration, has donated five cars to the Royal St. Vincent and the Grenadines Police Force.

“Unfortunately — some persons may say fortunately, but from my own vantage point, because the police — all the vehicles are red,” Prime Minister Ralph Gonsalves told a press conference on Monday.

Gonsalves, who is also Minister of National Security, said he told Commissioner of Police Renald Hadaway “you have to paint over, you know you have to spray over or you have to spray, if even there are parts red, you have to put other parts and you have to make sure all the police logo and everything there which is usual.

“I don’t understand how somebody — I don’t know. They ordered the vehicle, nobody paid any attention – I am talking about the donors, nuh — about sensitivities of issues of colour,” Gonsalves said, sounding light-hearted.

Red is the colour of the ULP, which Gonsalves heads.

“Well, not pigmentation, skin pigmentation but colour in relation to red and yellow,” he said.

Yellow is the colour of the main opposition New Democratic Party.

“If they were painted green, they shouldn’t have been any problem because not of any consequence in the colour scheme, nuh, politically that is,” the prime minister further said.

Green is the colour used by the SVG Green Party, which has attracted less than one per cent of the votes in the last two general elections.

“I told the Commissioner you have to get the permanent secretary to access some resources to do the preparation, the paint over. Let me say that up front before anybody say that Ralph – I know enough noise was made about the star out by the airport.”

He was speaking about the public outcry about the casting of a star in concrete near the EC$700 million Argyle International Airport, ahead of its opening on Feb. 14, 2016, seven years behind schedule and almost 100 per cent over budget.

“I was as surprised as everybody else that is red for these vehicles.”

Gonsalves thanked Baptiste for getting her clients from Malaysia who are interested in making some investments in St. Vincent and the Grenadines to make the donation.