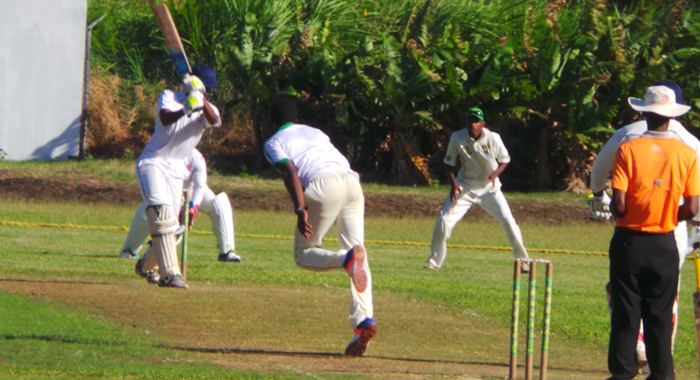 Police 2 continued their resurgence in the National Premier Division with a commanding innings-and-141-run victory over Carl Joseph Law Chambers ASCO at the Stubbs Playing Field on the weekend.

Police 2, who, despite causing much frustration to the team management of Frankie Joseph, Meldon James and Trevor Bailey as an inconsistent unit during the season, were able to put together some good performances, which are reminiscent of their championship winning year of 2006.

It was in that year that they were also able to record the highest ever team total in local cricket with 549 against Victors 1 at the Sion Hill Playing Field. In between then and now, they also suffered the ignominy of being dismissed for 20 by Team Rivals at Arnos Vale 2 in 2014.

In 2017, while still not without hiccups as evident by their flooring of over 10 catches then putting in a woeful batting display in their match against defending champions FLOW Radcliffe 2 weeks ago, it has been good for the most part.

Last weekend was, therefore, one of the times when they were ready and prepared to storm the citadels of their opponents and this they did with precision and with telling effect.

ASCO, who won the toss and elected to bat, were quickly scampering for cover as captain Kenneth Dembar and Darius Martin sent down a fusillade of shots with dire consequences. The result was that ASCO were shot out for 33 in 10.3 overs with Dembar 4/12 and Martin 4/17 doing the damage. The Police 2 reply was a veritable one-man show in the person of Andrew Thomas.

Thomas, a tall left-hander who at times looks ungainly at the crease, has the ability to unfurl the most elegant or the most brutal of shots during his innings and it was one of those occasions on the weekend when he struck a century.

Arriving at the wicket at the third ball of the innings, Thomas (143) set about the ASCO bowling, as an assassin lining up his target, picking the areas and the bowlers where he could inflict maximum damage.

He was supported on his “trek of destruction” by Desron Maloney (17) with whom he added 78 for the second wicket, Danson Andrews (24) another 76 for the third and Dember (30) 64 for the fourth wicket.

Thomas was eventually dismissed exactly 33 overs after his entry to the crease with the total 220/4. He faced 127 balls and struck 8 fours and 10 sixes.

Police 2, declaring with a lead of 219, took to the field with the clear intention of “taking no prisoners” and within 92 minutes, it was all over — ASCO blown away for 78 in 17.4 overs. Seamer Sylvanus Spencer 4/8, Dember 4/54 and Martin 1/19 shared the second innings spoils to give their team a satisfying win.