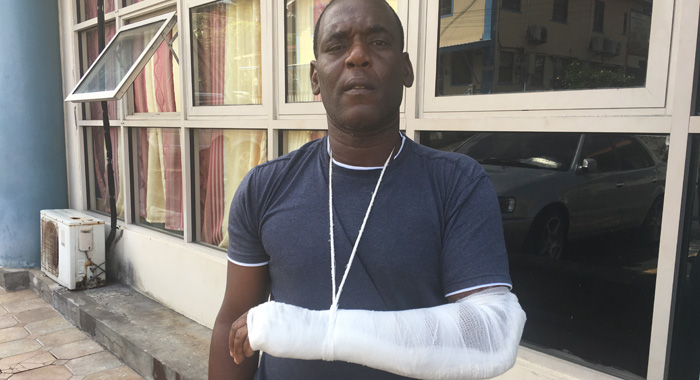 Dwight Phillips’ hand was broken, allegedly when he was struck by a police officer. (iWN photo)

The income of a Spring Village family, which includes four students, has been thrown into jeopardy after a man was reportedly struck by a police officer in Kingstown on Monday, breaking his left arm in the presence of his 14-year-old son.

Phillips, who is originally from Richland Park but lives in Spring Village, operates a cook shop in Kingstown, and also makes and bottles juices and walks the city, selling them at various offices.

“This is going to affect me 100 per cent,” he told iWitness News on Tuesday outside the Kingstown Magistrate’s Court, where he pleaded not guilty to the charges.

“There is nothing I can do. My shop is over there closed. I alone do all the cooking. My wife does assist me but everybody done accustomed to me and it will be very hard to gain customers by getting somebody else to do it for me; getting somebody to start all over. I can’t do nothing. The shop is just closed,” Phillips told iWitness News, his left hand in a cast.

“All this morning I [was] bawling, I [was] crying because I didn’t see no need [for this]. Since I come out here and put on my phone, everybody [is] calling me about what’s for lunch today. I have to tell them I can’t do nothing. My hand is broken — let go from one end to the other.”

Phillips was wearing a partial cast and said that when he returns to see the doctor on Friday, they will assess him and determine how long he has to wear the cast for.

He told iWitness News that on Tuesday he went to the Grenadines Wharf to take some bottles of juice for some workers on a boat and also at Maritime Administration, which is located at the Cruise Ship Berth.

Phillips said that he and his 14-year-old son approached one of the officers near the checkpoint where persons enter to board vessels to the Grenadines.

He said he approached a police officer and showed him the two bags and told him that he was going to make a delivery and the officer gave him permission to do so.

Phillips said his son told him that when he is finished at the boat with his father they would go to the Maritime Administration office.

The father said he told his son that he should go directly to Maritime Administration with the juice then they will meet again at the gate and leave together.

“When my son turn, the officer called him, ‘Come, come, come’, telling him he can’t go up there.

“I turned to him and asked him why my son can’t go to Maritime. Maritime is a public office; anybody can go there. I normally go and sell juice there and carry lunches; there isn’t a law that says you cannot go there.

Phillips told iWitness News that at this time, the officer told him that he would put him off the compound, so he asked why.

“Did I disrespect you? Did I tell you anything out of the way? I’m from St. Vincent. If I molest you or do you anything, then you have all right to,’” Phillips recounted of his conversation with the police officer.

He said the officer then collared him and started to pull him toward the gate, telling him to get off the compound.

The man told iWitness News that when the officer was pulling, two other officers approached their colleague.

“I had my bag in my hand. One of the police officers held me, another one help him and say to chill and try to find out what happened.”

He said the first officer continued to pull him.

“So I had my bag in my hand with the juice and the bag dropped. From the time the bag dropped, he pulled his staff (truncheon) and telling me he has a mind to buss me face.

“So me say, ‘Buss me face for what? If me do yo’ anything, go ahead and buss me face.’ By the time I could say that, he just leh go the staff on my hand and he broke my hand.”

Phillips said the x-ray shows that the blow broke the bone in his arm in two.

He said the two officers who responded to their colleague brought him to the entrance and he met a sergeant there, who inquired about what transpired.

Phillips told iWitness News that the officer who struck him came some minutes later and started to talk.

“So my son confronted him and say, ‘Daddy didn’t do him anything and he shouldn’t ah be doing Daddy that’,” Phillips said adding that other person made similar comments.

“He never arrested me to say ‘you are under arrest’ or anything like that.”

Phillips said he was taken to the Criminal Investigation Department (CID) at the Central Police Station in Kingstown, where the officer roughed him up going up the steps.

He said he told them that he wanted to see a doctor because his hand was broken.

He was taken to the Milton Cato Memorial Hospital, where he waited from some minutes to noon to after 5 p.m. for medical attention.

After receiving medical attention, he was taken back to CID where he was informed that he will be charged with resisting arrest.

“And then they came back again and tell me they are charging me with another charge, which is assaulting a police officer, which I didn’t do,” Phillips said, adding that the police told him that he would put him outside of the gate of the harbour facilities but never told him he was arresting him.

Phillips is to return to court on Oct. 23, for trial on charges that he resisted the arrest and assaulted Police Constable Clint Da Sousa in Kingstown on Aug. 14, 2017.