Possible link between high-powered gun and murder in Sharpes 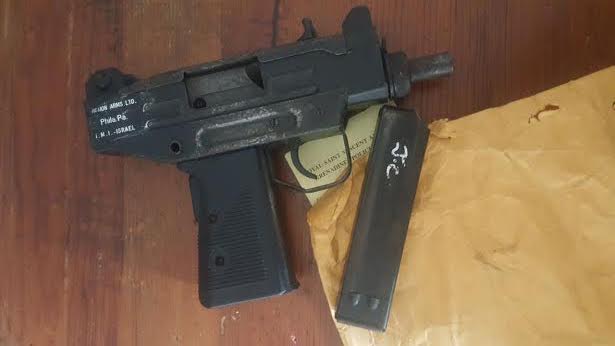 The 9mm Uzi at the centre of the investigation. (Police photo)

Detectives investigating the murder last week Monday, Aug. 14, in Redemption Sharpes of 22-year-old resident Kesron Quashie are exploring a possible link between his killing and a high-powered gun found in a car one day later.

Prosecutor Station Sergeant of Police, Elgin Richards, made the disclosure on Monday as he objected to bail for two of the three men charged with possession of the weapon.

They were also charged with having in their possession at Murray’s Village 12 rounds of 9mm ammunition without a license issued under the Firearms Act.

When they appeared at the Kingstown Magistrate’s Court on Wednesday, Ferdinand pleaded guilty to the ammunition and firearm charges.

Henry pleaded guilty to driving without a license and insurance, but not guilty to the firearm and ammunition charges, while Wyllie pleaded not guilty to his charges.

The men were initially remanded in custody until today (Monday).

When they reappeared before at the Kingstown Magistrate’s Court, Magistrate Bertie Pompey sentenced Ferdinand to six years in prison for possession of the weapon and two years for the ammunition.

But the prosecutor informed the court that the Crown will also proceed against Henry and Wyllie on the firearm and ammunition charges.

He told the court that the prosecution is objecting to the men’s bail on the ground that there has been a spate of shootings in Redemption Sharpes recently.

Four masked men shot Quashie multiple times in the abdomen as he was playing dominoes outside his home.

He was taken to the Milton Cato Memorial Hospital, where he succumbed to his injuries.

Police say that it has been reported that Charles, a 26-year-old, labourer of Redemption Sharpes was walking along the public road on Aug. 12 when he sustained gunshot wounds to the left side of his face, hip and elbow by an unknown masked man.

Meanwhile, Bibby, a 22-year-old, labourer of the same address was shot once in the left leg, breaking the bone in three places.

Richards noted that the defendants were found in close proximity to Redemption Sharpes.

He further told the court that in processing the scene where Quashie was murdered, detectives recovered certain exhibits and investigators believe that there could be a link between the gun recovered last Tuesday and that shooting the previous night.

Richards told the court that police are conducting ballistic examinations on spent shells recovered at the scene.

He said that the Crown believes that should the men be released, this could affect witnesses who are supportive of the police and national security as a whole.

“This is also a national security matter,” Richards told the court, adding that the investigation is not only centred on Redemption Sharpes.

“The net is wider than that,” Richards told the court, adding that granting the defendants bail may spread the net wider across St. Vincent and the Grenadines.

Richards further told the court that the Serious Offences Court, which is on recess, resumes on Sept. 4, and asked that the men be remanded in custody until then.

The magistrate granted the prosecution’s request and remanded the men in custody and transferred the case to the Serious Offences Court for hearing on Sept. 4.