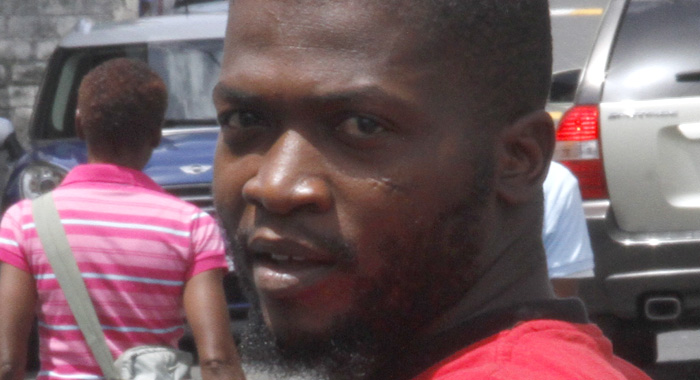 Olmando Fraser admitted to chopping the animal, causing it to die. (iWN photo)

A Walliabou man was on Wednesday given three months to pay a fellow villager EC$650 for a pig or spend a similar amount of time in prison for killing the animal.

Olmando Fraser pleaded guilty to a destruction of property charge when he appeared before Magistrate Bertie Pompey at the Kingstown Magistrate’s Court.

The charge stemmed from Fraser’s killing of a pig that belonged to fellow villager, Leroy Pipe, on Aug. 16 at Walliabou.

The court heard that Pipe’s pigs broke loose on the morning of the day in question and Pipe was unable to catch them.

Later that day, Pipe heard one of the pigs squealing and when he responded, he saw Fraser standing over the animal with a cutlass in his hand and what appeared to be blood on the cutlass.

An examination of the pig showed that its throat was slit and it had several chop wounds to the back.

Fraser pleaded guilty to the charge.

He told the court that contrary to the facts presented by the Crown, no one else was there when the pig died.

“But you’ve already pleaded guilty,” the magistrate responded, telling the man that his comment was by then immaterial.

“I pleaded guilty, to tell the truth,” Fraser said.

He told the court that he killed the pig because it had uprooted his crops, namely peas, corn and sorrel and no one came to inquire about the damage done on his farm.

A police officer, however, told the court that the pig was killed in a cocoa field belonging to the virtual complainant.

The magistrate chided Fraser, telling him that even if an animal damages his produce, there are procedures to be followed and he cannot just kill it.

The defendant, however, told the court that the pig was “aggressive”.