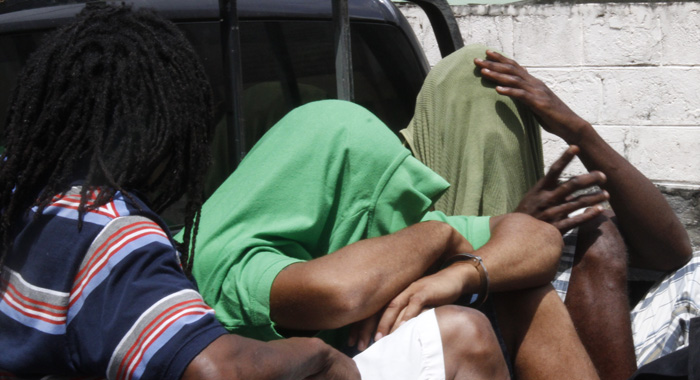 The accused men use their clothing to hide their faces as they are transported to prison. (iWN photo)

A man who had a concealed loaded firearm with him at police headquarters after he was arrested on suspicion of possession of another illegal firearm says he had been carrying the illegal gun since he was shot about two years ago.

Even after patting him down, police did not realise that the man, Kimron Thomas, 25, of McKies Hill, had the gun in his groin when he was arrested in Chauncey around 8:40 p.m. Monday.

He still had the loaded firearm in his possession at the end of the four-mile drive between the South Leeward community and the Criminal Investigations Department in Kingstown, where it fell from him.

Thomas was one of three persons arrested on suspicion of possession of a .38 firearm loaded with one round of ammunition that was thrown from a vehicle in Chauncey Monday night.

He was charged that he had in his possession at the Criminal Investigation Department general office in Kingstown on Monday, Aug. 21, one black Luger 9 mm firearm, serial number S4M97, without a license.

He was further charged that on the same date and place, he had in his possession six rounds of 9mm ammunition without a license.

Thomas pleaded guilty to both charges when he appeared at the Kingstown Magistrate’s Court on Wednesday.

Thomas, along with Devon Ashton, 28, of New Montrose, and another person whose identity police have not disclosed, was arrested around 8:40 p.m. Monday in Chauncey.

The court heard that officers from the Special Patrol Unit stopped motor vehicle PH520 in Chauncey and when they did so, someone threw a .38 pistol, serial number 3624, out of the vehicle.

The pistol was loaded with one round of .38 ammunition.

Ashton was charged with possession of that firearm and the round of ammunition but pleaded not guilty. His case was adjourned and transferred to the Serious Offences Court for hearing on Sept. 4, 2017.

The gun was allegedly thrown from the vehicle when police signalled it to stop as it was coming from Rillan Hill.

A search was carried out on all three occupants of the vehicle and they were arrested on suspicion of being in possession of the .38 pistol.

When the suspects arrived at CID in Kingstown, the police officers noticed that Thomas was walking in an awkward manner.

The police officers were about to carry out a search on him when the firearm fell from his groin area.

An examination of the firearm found that it was loaded with six rounds of ammunition.

At this point, Thomas told the police officers, “Officer, I got shot about two years ago. Me nah tek no chance with nobody.

Checks with the Traffic Department, where the firearms license registry is located, showed that Thomas does not have a licence to keep a firearm or ammunition.

A police weapons expert concluded that the firearm was functional and the ammunition live.

Thomas told the court he had an altercation about two years ago in which he was shot while on his way home in a bushy area.

He further said that on another occasion, a masked man attacked and tried to shoot him but the firearm was jamming repeatedly.

Thomas said that about six months after he was shot, a friend was going overseas and gave him the firearm with the six rounds of ammunition.

He said the police had met him with the gun and ammunition in the same condition that he received them.

Thomas told the court that he has a son and a daughter and a girlfriend and has an obligation to protect them.

He said he knew it was wrong to be in possession of an unlicensed firearm but told the court that he took the chance.

“I just did the necessary. That’s my defence why I have a gun without a licence,” Thomas told the court.

He further pointed out that he does not own a property or business that would qualify him for a firearms license.

But Magistrate Bertie Pompey pointed out to Thomas that St. Vincent and the Grenadines is “not the Wild, Wild West”.

“We are trying to take firearms off the street from you and your assailant,” Pompey said.

He sentenced Thomas to five years in prison for the firearm and two years for the ammunition.