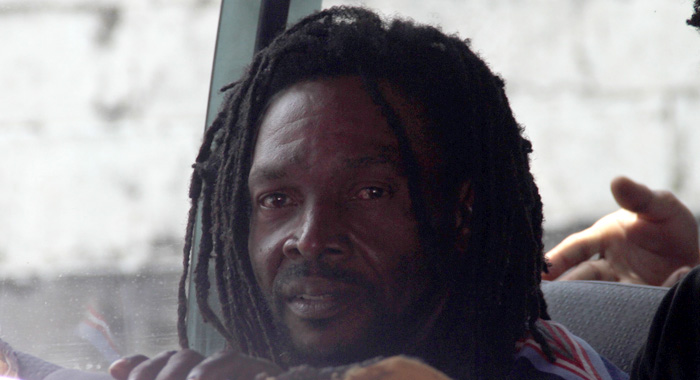 Carlton Hutchins will serve 18 months in prison for his crime. (iWN photo)

A Bequia man was on Friday jailed for 18 months for stealing from a British tourist who was visiting the northern Grenadines island.

The sentence was handed down on Carlton Hutchins after at trial at the Kingstown Magistrate Court at the end of which Magistrate Bertie Pompey told the defendant, “You are guilty; as guilty as the sun shines.

“You know that too and you came here and wasted over two hours of my time.”

When he was arraigned on Wednesday, Hutchins pleaded not guilty to a charge that on Aug. 18, 2017, about 7:20 p.m. in Port Elizabeth, Bequia, he stole one black clutch valued EC$50 containing one small black purse valued EC$150 and one Samsung Galaxy cellular phone with its turquoise phone case, valued EC$480, and US$110 and EC$300 in cash, the property of Maria-Ann Frosdick of England.

Prosecutor Elgin Richards had objected to Hutchins’ bail, saying that the virtual complainant was a visitor who was expected to leave the country on Monday.

The court adjourned the matter to Friday.

During Friday’s trial, the court heard that Frosdick and her husband were walking in the town when Hutchins and an unidentified accomplice accosted them.

The accomplice was wielding a knife and Hutchins, who walks with a limp, grabbed Mrs. Frosdick’s purse and ran.

The knife-wielding accomplice cut off the couple and allowed Hutchins to escape.

iWitness News understands that the Crown had considered a charge of robbery against Hutchins, but settled on the theft charge because of the limited time the that the Frosdicks had remaining in the country.

Bequia resident Kenroy Lavia, who testified for the crown, told the court that he was driving along Crab Hole Road going towards Mac’s Pizzeria when he saw the defendant jump into a gutter as the lights of the vehicle approached.

Lavia told the court that Hutchins then started running.

The Frosdicks later approached Lavia and told him that they had just been robbed.

Lavia used his cellphone to notify the police and then turned his vehicle around and went in the direction that he had seen Hutchins going.

He said on approaching Village Apartments, he saw Hutchins running towards him and the man then ran into the parking lot at the apartments.

Lavia told the court that he drove into the parking lot and saw Hutchins scaling the fence.

The witness said he shouted at Hutchins, using his nickname, telling him, “Buckie, I see you.”

Hutchins replied, “See who?” and jumped over the fence and went into some bushes.

Also taking the stand was Corporal Simon of the Rapid Response Unit, who, along with other officers responded to the call.

Simon said that after he dropped off two officers at the scene of the crime, he went in pursuit of Hutchins.

However, Hutchins was able to evade capture that night by running into some thick bushes and changing direction quickly as Simon pursued him.

The police apprehended Hutchins at his home two days later, wearing the same clothes that the virtual complainant and the witnesses said he was wearing on the night of the crime.

In his defence, Hutchins said that he did not jump into a gutter when he saw the light of what turned out to be Lavia vehicle, but had scaled the fence.

He said he did so because he was delivering a pound of marijuana for someone and thought that the lights he saw was of a police vehicle.

The defendant further told the court that when Lavia called out to him, he responded, “I have weed here and thought is the police, so I run.”

Before sentencing Hutchins, Pompey noted that he had been jailed at least twice for theft and burglary, including stealing eight pieces of 2×4 lumber in 1995.

But Hutchins denied having gone to prison for that crime.

The magistrate, sounding annoyed, asked Hutchins if he wanted him to get the information from the Prisons.

“If you are trying to mislead the court, I will deal with you severely,” the magistrate said.

Hutchins then said that he had, in fact, been jailed for marijuana possession and theft.

“And now you are telling me it’s not you,” the magistrate commented, to which Hutchins said the last time he was imprisoned was 17-18 years ago.

He told the court that he has trying to keep himself away from trouble.

However, Richards told the court that people like Hutchins are having an adverse impact on the nation’s tourism industry.

The prosecutor said that when visitors come to the country and people like Hutchins commit crimes against them, the visitors return home and tell their friends and dissuade them from visiting.

Richards said this damages the country’s reputation internationally, and said that the court must protect residents and visitors who come to enjoy the nation’s tranquilly from criminal elements such as Hutchins.

The prosecutor asked the court to impose a custodial sentence.

Before handing down the sentence, Pompey noted that Hutchins had taken the court through a lengthy trial.

“That is your right and sentencing you is my right,” he said as he imposed on Hutchins an 18 months sentence for the crime that has a maximum penalty of two years in prison — effectively giving him the maximum sentence.