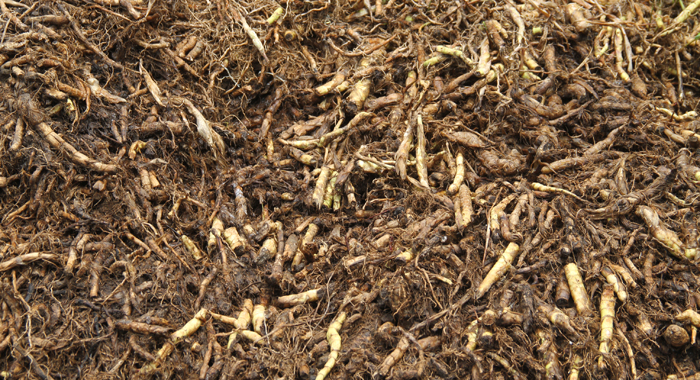 Some of the rhizomes are at an advanced stage of decay in the factory yard last month. (iWN photo)

Minister of Agriculture Saboto Caesar said he did not comment last month about arrowroot rotting at the factory in Owia amidst a breakdown because he was in the process of closing an EC$500,000 food deal.

“The reason I didn’t want to respond, I was in the process of closing a half a million dollar transaction about food.

“And here is a statement about some rotting rhizomes in the yard. I didn’t want to marry those two because I didn’t want my market to be affected.

“At the end of the day, I have half a million dollars in my hand, your discussion is a bird in the bush.

“But I am happy I could discuss it now and I really wish that you continue in that vein, that when you see things, you highlight them; cause that if your job as a journalist,” the minister told iWitness News on Monday.

“And we will always give your ministry a chance to comment. Whether or not they want to take advantage of that is up to them,” iWitness News told the agriculture minister.

Caesar’s comments were the first by any official associated with the arrowroot industry since we reported on the situation on July 27.

iWitness News attempted to get a comment from the minister via Facebook on the weekend but asking twice under a post he made about the impact that the arrowroot rhizomes had rotted would have on the industry.

The minister admitted on Monday that he had deleted the comment, twice, without responding.

“One of the reasons why I did not answer and a lot of people were calling on me to answer to the original statement which went out from iWitness News  — and you gave me an opportunity twice on Facebook, which I deleted…” he said and later went on to talk about the EC$500,000 food deal.

As part of our reporting, iWitness News visited the association’s office in Orange Hill, where we met factory manager, Cauldric Browne poring over what appeared to be voucher booklets on a desk.

Browne told iWitness News that he was “extremely busy” and could not spare time to respond to our questions.

Told that iWitness News had travelled all the way from Kingstown and asked if he couldn’t spare us a few minutes, Browne said, “I have to get these completed before the day [ends].”

He said iWitness News should contact the chairman of the board of director of the association, Peter Ballantyne, and provided a number at which he said Ballantyne could be reached.

Asked again if he could not spare a few minutes for a comment, Browne told iWitness News, “I wouldn’t want to make a comment,” adding that he wanted to finish the paper work he was doing.

iWitness News made, over the past two days, several calls to the number that Browne provided for Ballantyne.

All of the calls went unanswered.

The minister said that the government paid on Friday some EC$1 million to arrowroot farmers, including those whose rhizomes rotted or sprouted in the yard of the factory.

Farmers in the North Windward community, one of the poorest districts in St. Vincent and the Grenadines, complained to iWitness News about the impact of non-payment for the rhizomes on their livelihoods.