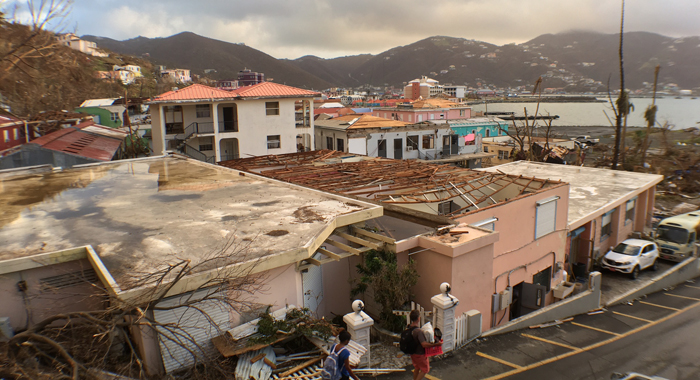 Disasters can have a devastating impact on people’s mental health. This photos shows the impact of Hurricane Irma on the British Virgin Islands in September 2017. (CMC photo)

ROAD TOWN, British Virgin Islands, Sept 11, CMC – Chairman of the Organisation of Eastern Caribbean States (OECS), Allan Chastanet, says he remains optimistic in the aftermath of the devastation caused by Hurricane Irma when it churned its way through the Leeward Islands last week.

Chastanet, who is also the St. Lucia Prime Minister, arrived here on Sunday, the first stop on a multi-island tour to assess the damage left by the Category 5 hurricane, which also devastated Barbuda and is being blamed for several deaths in the northeastern Caribbean.

Chastanet, who was accompanied by his Dominican counterpart, Roosevelt Skeritt, told the Caribbean Media Corporation (CMC) outside the Terrance B. Lettsome International Airport, that his team is on a fact-finding mission to report to the other OECS leaders on Monday. The British Virgin Islands (BVI) belongs to the nine-member sub-regional grouping.

“This is the first of many stops. We are off to Anguilla; we are off to St. Kitts and Antigua to be able to get a full assessment of the situation.”

“Clearly, here, in the BVI, it was a very devastating storm but we can’t do anything to change that. So, the idea is to focus on how we can get things better,” Chastanet said, describing as critical, the need for food and water.

“From a logistics perspective, the OECS is right here and we’ve offered our services. And what we are trying to do, we have boat transportation bringing materials,” he said, adding that the sub-regional grouping is hoping to have a cargo plane originate in Trinidad and collecting supplies in the various CARICOM member states as it flies to the BVI.

“In looking at the infrastructure, the road network is in good shape. Clearly, you can see the electrical wires are down, the telecommunication suffered, but things like food and water are not that far away and I know that we can put those things in place,” Chastanet told CMC.

At the airport, a number of visitors, some with their pets, were trying to leave the island. Among them was a group of 10 European nationals who have been trying since Thursday to leave for “anywhere away from here”.

The members of the group, who did not want to identify themselves, said that while food and water are available, they are in limited supply.

Electricity was restored to the airport on Sunday after engineers were able to get the back-up generator functioning and  among the flights given special permission to land was a charter from the Antigua-based regional carrier, LIAT, which brought in members of the rapid needs assessment team (RNAT) from the Barbados-based Caribbean Disaster Management Agency (CDEMA).

The plane had to circle the airfield while a number of aircraft, including military helicopters from the British armed forces and specially authorised flights, cleared the runway and apron, amidst a light and brief downpour.

Through the windows of the aircraft, passengers saw an island more akin to what one would expect during the heart of an especially arid dry season of the type that has afflicted many of the Leeward Island in recent years.

But, rather than having been robbed of their leaves by insufficient moisture, the trees had beaten of their covering, and, in some places, totally uprooted by the 185 miles per hour (mph) winds that accompanied the storm — among the worst to hit the region in recent times.

At the airport, many of the royal palms had been stripped of their regalia, as was the case with an SUV whose rear windshield had been replaced by plastic sheetings.

Its occupants, a man and his girlfriend from Road Town, declined to speak about their experience during the hurricane, with the woman telling CMC, “I don’t want to relive it.”

Their SUV had specks of mud from flooding inside — including on the dashboard – as a result of the hurricane.

But the damage to the vehicle was a minor consideration for the couple, who was thankful that they still had use of it, should the water and other supplies they were expecting from Antigua arrive.

They said that supermarkets were limiting a number of items that they sell to any one customer.

Asked about water, electricity and telecommunication, the woman, an employee of a telecoms provider, scoffed, “There is no public supply of anything.”

Prime Minister Chastanet said there is a huge clean-up exercise that needs to take place.

“But we came here to really reassure citizens of the BVI and also nationals from the OECS and CARICOM that we are here and that it is very important for us that the British Virgin Islands gets back up and operating as quickly as possible.”

He said the OECS team met with the Governor of the British Overseas Territory, Gus Jasper, and some members of his cabinet “to assure them of our support”.

Chastanet said that his team visited the hospital.

“So things like nurses, doctors, electricians, all those resources are available to the Virgin Islands,” he said, adding that the OECS can also bring to bear on the situation here its own experience responding to natural disasters.

Regarding the impact on the island’s housing stock, Chastanet said that while he did not have the numbers, “obviously, it is pretty dire. You can see a lot of roofs are gone, there is a lot of structural damage to buildings. There is a lot of repairs to be done.

“But what I have learnt in these situations is to try to focus on some of the positives. The fact is that the road network is still in place, the airport was damaged but not significantly,” he said of the aerodrome, which has been opened to receive emergency crews and disaster relief personnel and to ferry out persons wanting to leave.

He said that seaport is also opened, adding, “so those are all beginnings.

“The British are here, in terms of support, CDEMA is here, CARICOM is here in support. We are getting St. Kitts and also Antigua back up to full operation and they can even of a greater assistance.

“Clearly, with St. Martin being damaged, St. Thomas — my understanding — is badly damaged, it is left to the Caribbean.  And we’ve come together as brothers and sisters, as we should, to be able to give them both in terms of resources, and also in terms of assistance and technical know-how,’ Chastanet said.

One reply on “OECS chairman ‘optimistic’ in Irma’s aftermath”