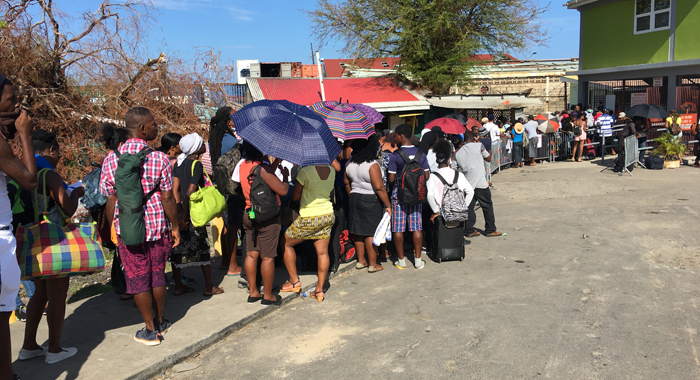 ROSEAU, Dominica (CMC) — Almost three weeks after Hurricane Maria decimated their island, Dominicans were on Thursday queuing for hours for an opportunity to buy food or board a vessel leaving the island.

There were long lines outside the gates to the deep water harbour at Woodbridge Bay, where persons had gathered in the hope of being able to sail out of the island.

Among them was Sheba Belle of Giraudel, a community about 15 miles south of the capital

Belle is hoping that the concession given by the French would work out for her 16-year-old daughter and her 7-year-old grandson so that they can continue their education in the French overseas department.

She, however, noted that she is hoping that they can stay there for a maximum of three months.

“There is no school, there is no water, no light, and the children, I don’t think they can handle that too well. I will stay back to build but I am sending my kids to be a little better, a little more comfortable.”

Belle was fortunate in that the tickets on which the children would travel were bought in Guadeloupe, thereby guaranteeing them passage on the ferry.

However, Belle, a teacher, is not sure when she will return to work although some fifth form students have returned to class, ahead of their examinations, which begin next May.

In addition to her teaching job, Belle and her husband are farmers, and that sector has also suffered significant losses.

“Our greenhouses are all damaged because a tree fell on them. We only have one standing but that has no plastic. So that part of our livelihood that gave a little extra money, that is gone for now.

“I work for the government so I wait and see what’s happening with the teaching job.”

Belle was, however, blessed in that there was no damage to her house. “Just a lot, a lot of water. I had to be sweeping water all night long but my roof stayed on,” she told CMC.

Fortunately, she also has enough food and water because she had prepared for Hurricane Irma, which did not hit Dominica but left significant damage in the Leeward Islands.

After Dominica was spared the worst of Hurricane Irma, and with Hurricane Maria following shortly afterward, Belle and her family topped up their supplies.

Belle also got some relief from the government, which latest a few days.

Her daughter, Shelise Belle, had mixed feeling about leaving for Guadeloupe.

“It might be for selfish reasons but I cannot deal with Dominica. College is closed and I want to continue my school. No electricity, cold baths every day. I just want a change. And I was vegan before the hurricane and now I am eating meat and I don’t really like that,” she said.

Also waiting to leave was Nadia Riviere, a resident of Bath Estate in south Roseau.

She left the country one week earlier to take her children out and was returning to Barbados to connect to Grenada, where she is going for graduation from her master’s degree programme.

She, however, was not in the long line with all the other persons, but she said it was still difficult.

Riviere returned to Dominica on Monday after a 14-hour trip on the Barbados Coast Guard and was hoping to make the return leg to Bridgetown.

“Honestly, things are very tough. I did not believe that my children would have made it so I took them out. It gets worse every day because you have no electricity, no water. Somebody must stay to rebuild, so I am here. But if I really had a choice, I would have done myself, like all the others leaving,” she told CMC.

The hurricane damaged part of the roof of Riviere’s house and deposited a lot of mud inside.

“I am not too sure where the mud came from but I haven’t really completed half of the job but you have to do what you have to do,” said Riviere, who said she would return to Dominica on Oct. 14, once she can get a flight or boat back.

She paused when asked if she is optimistic about the future in her country, even as it was yet to recover from the devastation of Tropical Storm Erika, which struck in August 2015.

“Arrrhm. Well, yeah. Btu it will take some time. It will take a lot of time. But we are resilient people so I expect us to bounce back fairly quickly,” she told CMC.

At S-Mart, a supermarket and hardware on Goodwill Road, a few hundred yards across the road from the harbour, there was a long line of persons hoping to buy items.

Among them was Ruthann Beaupierre, a middle-aged woman who began queuing around 7 a.m. (local time), two hours before the business was scheduled to open.

“I am hoping to buy garbage bags, sugar and personal stuff I need for my home,” said the woman who lives with her daughter and grandchildren.

Her house was severely damaged by the hurricane.

“Roof gone, windows gone and my personal belongings that I had at home are damaged. Everything is gone,” Beaupierre told CMC.

She said that it has not been easy to get basic items like food and water since the storm.

“I saw some foreigners, I don’t know who they are and when they passed, they will ask do you have any water, and when you say no, they will leave you two little bottles of water.”

She said her grandchildren are “trying”.

“We need food, we need food. That is all,” a woman in the queue says as a man shouted “after nine” to the staff of the establishment, an indication that it had gone past the time when the business was scheduled to open.

The woman, who did not give her name, told CMC that she was hoping to buy rice, flour, oil, “those kinds of basic things and water”.

She said it has been very difficult for her to get those basic items.

The roof of her home was damaged, but, unlike many Dominicans, she has running water at her home. “We boil it and we drink it.”

The lady who later identified herself as Cherie Angol, later told CMC that her father has prostate cancer and her community, Stockfarm, just on the outskirts of the capital, has not received any aid since the storm.

Angol said along with her sister they also went to the outlet on Wednesday to try to buy supplies.

However, the rush was such that the police officers providing security discharged their firearms to try to bring order.

“When I heard the gunshot, I got a terrible headache, I just backed out… I just decided to go home.”

She said the management was allowing 10 people into the supermarket and five into the wholesale at a time and were only allowing persons to buy a maximum of two of any items.

During his daily media briefing on Thursday, Prime Minister Roosevelt Skerrit again urged residents to be patient, noting the challenges of getting aid to 70,000 people in conditions like those left by Hurricane Maria.