Gonsalves faulted Mitchell for SVG’s cocaine problem. So who’s to blame for the guns? 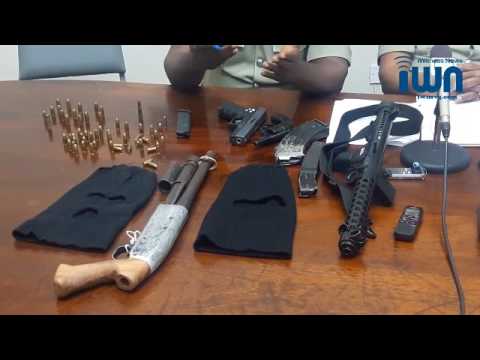 When Prime Minister Ralph Gonsalves was Opposition Leader, he was explicit in blaming then Prime Minister, Sir James Mitchell, and police chief Randolph Toussaint for the nation’s cocaine problem.

“… when you call James Mitchell name, when you call Randolph Toussaint name, you associate them in historical terms with the tremendous growth of cocaine and drugs in this country in the sense that they have the responsibility to stop the drugs from coming in,” he said back then.

“If they do not stop the cocaine coming in, it has to be their fault because they are in charge of the security arrangements so to do. And one of the first responsibilities of any serious government is to provide proper security for its citizens,” Gonsalves had said before he and his Unity Labour Party came to office in March 2001, promising, among other things, to be tough on crime and its cause.

But now, Gonsalves has been Prime Minister for almost 16 years and Minister of National Security for more than a decade and Vincentians are lamenting the nation’s gun problem.

“How would you respond to a criticism that as Minister of National Security, it is your responsibility to stop illegal guns and ammunition from coming into St. Vincent and the Grenadines?” iWitness News asked the prime minister at a press conference in Kingstown on Tuesday.

“It is my responsibility to set up all the requisite institutional arrangements and support system to curtail gun coming into the country,” Gonsalves responded.

“Unfortunately, the United States of America, where we are close to, has a Second Amendment. And they have a proliferation of firearms,” Gonsalves said, referring to the Constitutional provision which says the right of the people of the United States to keep and bear Arms, shall not be infringed.

Gonsalves spoke about the shooting in Las Vegas, United States on Oct. 1, in which a gunman opened fire on concertgoers, leaving 58 people dead and 546 injured.

“He had 40-something guns, all of them legal,” Gonsalves said of the deadliest mass shooting committed by an individual in the modern history of the United States.

Gonsalves said a lot of guns come into St. Vincent and the Grenadines.

“And I believe a lot more would have been coming in if efforts are not made at the ports of entry and work by the Coast Guard to stop them and our work with international entities.”

He said that at the United Nations, St. Vincent and the Grenadines and Trinidad were at the forefront to push for the Small Arms Treaty set up in 2015.

“Also, guns come through with guns coming out of Columbia, Venezuela, other places, Trinidad and Tobago — not they alone, but I name some.”

He said this is why the police and Immigration work with the intelligence available regarding persons entering SVG.

Gonsalves said that Customs also have to be on their guard.

“Unfortunately, we have a lot of bays where persons get in and they come in undetected.”

He noted that there is a radar system but said that sometimes people go out to sea and bring in illegal items.

“Now, I have responsibility for national security, citizen security, and you judge on the basis of the efforts which are being made to address this question and I believe that we keep a number of guns out,” he said.

Gonsalves said that a few months ago, a high-powered assault weapon from a cache stolen from an armoury in Atlanta, United States was intercepted on its way to SVG.

He said that SVG has a very strong gun law, having increased from one to seven years the maximum penalty for possession of an illegal firearm.

“So I say make the judgment with us in the legal provisions we have put in place, resources which we have deployed and are still deploying, the regional and international arrangements which we make…

“The fact that guns come in don’t mean that I have not lived up to my responsibility,” Gonsalves said.

2 replies on “Gonsalves faulted Mitchell for SVG’s cocaine problem. So who’s to blame for the guns?”