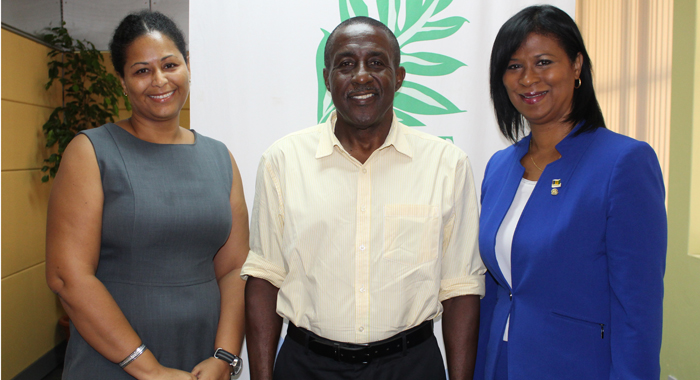 Vincentian national Annette Mark, who possesses a wealth of diverse professional work experience, has taken up a three-year post as the new Executive Director at Invest SVG — St. Vincent and the Grenadines’ official investment promotions agency.

Additionally, Invest SVG also welcomes a new Deputy Executive Director, Vincentian Nadine Agard-Juillerat, who brings a strong business and marketing background with her to the IPA.

Mark, who officially took up the post on Monday, Oct. 16, said that she is looking forward to this “new challenge” as she believes that our multi-island state is ready for investment — especially “in light of the fact that we now have a new international airport…

“It’s a new challenge for me but I’ve had many new challenges before, and I have risen to the occasion at all times. I plan to do the same at Invest SVG — take my experiences from over the years, and with the help of the staff we can make something big of this!” Mark said.

“Invest SVG has to be more visible both internationally and locally in the services we offer and what we have achieved thus far and we must develop and find more avenues to assist our local market with exporting Vincentian products and services.”

Mark also said she would like to see Invest SVG “come up with new and innovative ways” that will push the product that is St. Vincent and the Grenadines to the forefront on a regional and international level.

Mark, a past student of the Girls’ High School, also shared her hopes for the further development of Invest SVG.

“In respect to the department itself, I would like to see us become more financially sustainable, rather than a department that depends entirely on government.”

Deputy Executive Director Nadine Agard-Juillerat, who has held positions at Invest SVG in the past, described the investment promotion agency as a “dynamic organisation” and regards her new post as an “opportunity to assist Invest SVG in becoming a strong best practice agency that will be a global leader in its field”.

“I believe that change is important and it thus allows us to adapt to certain circumstances easily. The FDI [Foreign Direct Investment] arena can be a difficult place to navigate but we have a new executive director who comes with a great deal of experience and a wealth of knowledge, with whom we can make a positive difference to St. Vincent and the Grenadines,” said Agard-Juillerat, who took up her post in early September.

She added: “I am proud to be part of a dedicated team, and look forward to seeing the organisation experience its own growth and development.”

Mark’s immediate previous post was Antigua and Barbuda’s Chief Immigration Officer, and she has a legal educational background — holding a Bachelor of Laws degree from the University of London, and is a graduate of the Hugh Wooding Law School in Trinidad.

Mark was also Legal Counsel for the Office of National Drug and Money Laundering Control Policy, a law enforcement agency, with responsibilities, which include investigating reports on specified offences and the proceeds of crime. The agency is also the main regulatory and oversight body for domestic banks in Antigua and Barbuda.

Additionally, she is a former Director of Anti-Corruption within the Office of the Attorney General (Antigua and Barbuda) and has extensive legal experience in private practice in Trinidad and Tobago.

Mark’s other experience includes: member of the Committee of Experts to the Mechanism for the Implementation of the Inter-American Convention Against Corruption (MESICIC), Governmental Expert to the UN for the United Nations Convention Against Corruption (UNCAC), outgoing Chair of the CARICOM Committee of Chiefs of Immigration and Customs, and she also chaired a sub-committee of a Technical Working Group which developed a CARICOM anti-terrorism strategy to be presented to CARICOM Heads.

Agard-Juillerat has previously held the posts of International Customer Relationship Officer at the European Commerce Bank Ltd, Principal at consultancy firm Helconia Ltd., and, among others, business facilitation manager at Invest SVG.

She holds a Bachelor’s of Science degree in business administration from University of Rhode Island (USA); possesses training in FDI in the Caribbean, project management and banking; and is fluent in French, with proficiency in Spanish, Portuguese, Basic Arabic and Basic German.

“Annette brings with her strong leadership coming from her job as Chief Immigration Officer in Antigua – which is a role that carried a heavy set of responsibilities and calls for mature leadership,” Regisford said.

He also said that Mark, over the years, has lived in several regional countries and further afield and this has expanded her outlook and the way in which she functions on a professional level.

“Her own network of influential and potential investors would be an asset to Invest SVG. We look forward to her and the team at Invest SVG delivering on its mandate!”