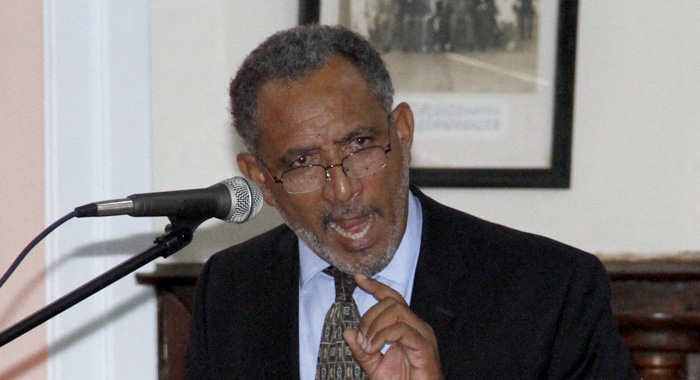 Leader of the Opposition, Godwin Friday, says that the current crime wave shows that the Unity Labour Party (ULP) has kept one promise: to make St. Vincent and the Grenadines ungovernable.

“There are a lot of people in St. Vincent now who feel that anything goes. That basically, if you are politically connected, you can get away with anything,” Friday said Monday on Boom FM.

“There is a sense of lawlessness in St. Vincent and the Grenadines. And this was promised by the ULP when they were in opposition. They said they would make the country ungovernable. Well, that is one promise they have kept because right now, the situation is out of control,” he said.

After the 1998 elections in which the ULP won seven of the 15 parliamentary seats while taking the popular vote, the party pledged to make the nation ungovernable.

Their promise came although the nation’s first-past-the-post electoral system made the New Democratic Party, which won eight of the 15 parliamentary seats, the legitimate government.

Friday’s comment came in the context of a spate of shootings across SVG, which have escalated since September.

Last Saturday, eight persons were shot at a shop in Diamond as gunmen opened fire indiscriminately.

One of the injured men, Gregory “Woody” Abraham, aka “Pecker, 33, of Diamond, succumbed to his injuries at the Milton Cato Memorial Hospital on Monday.

Then, on Sunday, Paul’s Avenue resident Jawansa “Sanga” Fraser survived being shot six times while standing at the roadside in the Kingstown community.

Friday said that the Ralph Gonsalves ULP administration has lost control of SVG.

“So one of the things that have to be done is that there has to be, in terms of crime fighting, you have to make sure that the police are functioning professionally. Where there is a crime, investigate the evidence and you prosecute. That’s what you do.

“You don’t just say some people are connected so they get away with a slap on the wrist or they are not prosecuted at all and others, for any small slight, they are sent to prison for six months, nine months, a year.”

The opposition leader further said that politics must be kept away from the operations of the police force.

Friday spoke about the incident in which then Commissioner of Police, Michael Charles, wore party colours at a ULP rally and flashed the party’s “four-inna-row” hand gesture.

“I mean, come on. When has that ever happen before in St. Vincent? Who gives licences for that sort of thing to happen in St. Vincent and the Grenadines? Where does one get the idea that that is appropriate conduct?

“That has to be something that is fostered at the political level, where you feel that so long as you support the party, you can do anything. And if it happens there with the Commissioner of Police, think when it happens with some young student 17 or 18 years old thinking about what to do tomorrow or what to do to get some money in his pocket.”

Friday said that there laws that can protect residents of SVG but they are not being enforced because “people have to look to see which party card you carry before they take action”.

He also said that the nation’s economy needs to start growing again.

“People are on edge now. Everybody is finding it difficult to make ends meet. Everybody is short-tempered. Everybody is looking for advantage and shortcut because they feel that they are losing out in this economy in St. Vincent and the Grenadines.

“We must bring that back. Crime fighting is not all about simply having stronger penalties and large police forces,” Friday said.

Friday said that SVG is faced with “a situation where the economy is dead or comatose”.