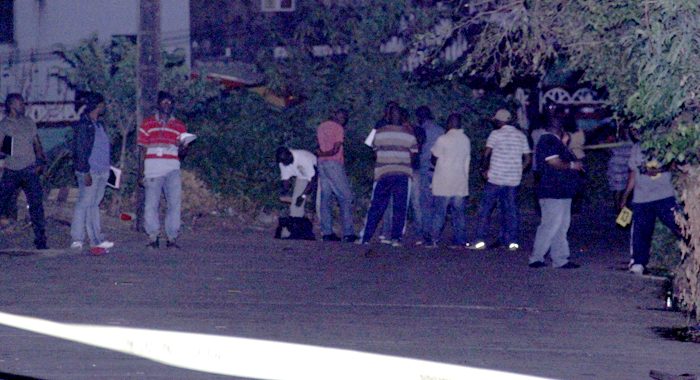 A man on bail for a gun and ammunition charge is expected to appear before the Serious Offences Court this morning, Thursday, where another gun possession charge will be read to him.

Collin “Cocoa” David, a 29-year-old labourer of Long Wall, has been arrested as police continue investigations into the two shooting incidents on the weekend — at Diamond and Paul’s Avenue.

David will be slapped with another gun charge days after his lawyer, Grant Connell, objected to the prosecution changing the pre-existing gun charge from indictable to summary.

The accused man was in May charged with having in his possession one Canik 9mm semi-automatic pistol and 36 rounds of 9mm ammunition, without a license issued under the Firearm Act.

The charge was brought against him after he was arrested in Kingstown on May 5.

Gershon Calvin Cole-Woods, a 37-year-old farmer of Belair, who was arrested with David, was charged with having in his possession one .38 Taurus revolver and 15 rounds of .38 ammunition, without a license issued under the Firearm Act, at Kingstown on May 5.

The men were not required to plea to the indictable charges when they appeared before Chief Magistrate Rechanne Browne-Matthias at the Serious Offences Court on May 8.

They were each granted EC$50,000 bail with one surety, and a number of other conditions were attached as part of their bail.

However, one week before his September court date, Cole-Woods’ family lost contact with him and the matter was immediately reported to the police.

He has not been heard from since and sources in the know said that he is believed to have been murdered.

“Well, given the current climate, anything is possible,” Connell had told iWitness News in September about that theory surrounding his client’s disappearance.

On Sept. 8, Chief Magistrate Rechanne Browne-Matthias ordered Angella Ballantyne, who had stood as surety for Cole-Woods, to pay the court EC$12,000 after he failed to turn up for the hearing.

The woman had initially been ordered to pay the full EC$50,000 surety amount, but this was reduced by $38,000 after Connell’s representations to the court.

This past Monday, as David’s matter came up for hearing, the prosecution informed the court that they will proceed against him summarily.

This means that rather having a preliminary inquiry to determine whether the case should be sent to the High Court for trial before a judge and jury, David would be tried at the Serious Offences Court.

However, Connell objected a summary trial, telling the court that the defence would prefer a trial before a jury.

Connell said that the defence had indicated certain grounds on which it believes that a summary trial would be prejudicial to his client.

In response, Browne-Matthias told the lawyer to present to the court the relevant section of law on which he was basing his objection.

Connell then said that he was not ready to proceed on the matter because it had become a summary trial.

The chief magistrate then told the defence counsel that his objection is contradictory.

But Connell explained that he was, in fact, objecting on two grounds: his client wished to be tried before a judge and jury, and, secondly, if the Crown decided on summary proceeding, his client would have to put up a defence, but hadn’t brought any witnesses to court that day.

Connell said that proceeding on the matter would be unfair to the defendant.

The chief magistrate then said that she would grant Connell a “short adjournment” for him to properly address the court on the issues he raised.

The date for the next hearing id Nov. 8.

Fraser is expected to make a full recovery after being shot six times in his hometown.

No stranger to the law

David is no stranger to the law, having faced two murder charges and one charge for attempted murder.

Two years ago, David was freed of the May 5, 2015 murder of Jahjust Devon Steele, who was shot and killed in Rose Place, hours after being released from police custody.

In 2012, David was freed of a murder charge resulting from the 2009 shooting death of fruit vendor Ashley Seymour of Long Wall.

David was also charged with attempted murder in relation to the shooting of Police Constable Julanie Jack.

Jack was shot as he went to the assistance of a postal worker who was being robbed in Kingstown on June 13, 2013.

The postal worker was relieved of EC$102,000, which was never recovered.

David’s arrest in May came four months after he was released from police custody.

In December 2016, he was charged with assaulting his child’s mother, but the woman told the court on Jan. 3, 2017 that she did not want to proceed with the matter.