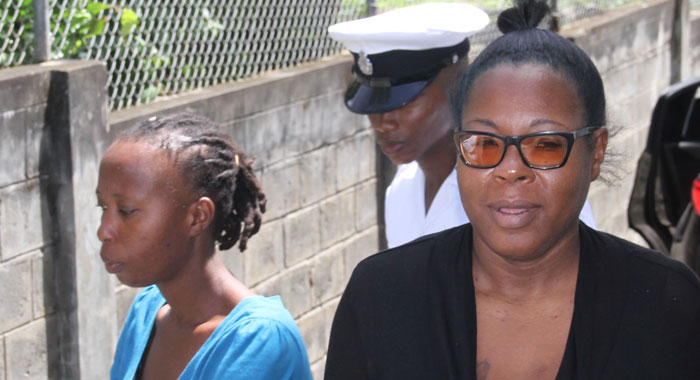 A pregnant woman and another who recently gave birth were on Monday jailed for eight months for stealing some EC$65,000 from their former employer, Sun General Insurance Inc.

Chief Magistrate Rechanne Browne-Matthias further ordered Diana Quammie, of Belmont, and Shaffique Martin, of Fairbaine Pasture, to each repay by July 6, 2018 the amount of money they stole or go to prison for a further 12 months.

After hearing the facts from Senior Prosecutor Adolphus Delplesche and his submissions on sentencing, as well as mitigation arguments by the women’s lawyers at the Serious Offences Court, the chief magistrate said she needed five minutes to determine what sentence to hand down.

Those five minutes turned into an hour, before the chief magistrate returned, telling the woman that sentencing them was no easy task and that she took no pleasure in doing so.

Browne-Matthias, however, said that the women’s crime was not an act of simple theft but was accompanied by a level of sophistication.

What was worse, she said, was that the women had violated positions of trust at their previous employer.

She said that the sentence would seek to punish the women for their crime, deter them and others from similar actions, denounce forcefully that type of conduct, and restore their previous employer to its original position.

The women were initially charged along with Shamair Frederick-Michael, who was relief cahier at the company.

However, since their dismissal last October, Frederick-Michael repaid EC$37,447.67, resulting in the charges against her being dropped.

In presenting the fact in court on Monday, Delplesche said that Quammie, a former accounts clerk at Sun General Insurance, Martin, a former cashier, and Frederick-Michael were involved in the scam.

The theft came to light as Danielle Cyrus, the branch supervisor, was investigating a query from RBTT bank in relation to a client’s insurance payment.

During those investigations, Cyrus spoke with Frederick-Michael regarding some irregularities with the client’s insurance payment.

Frederick-Michael confessed to Cyrus and Yvonne Williams, branch manager of the insurance company, that she (Frederick-Michael), along with Quammie and Martin, had been steeling the company’s money from February 2015 to October 2016.

The total amount stolen from the company during the period was EC$86,682.65.

The women were terminated from their jobs when the theft was discovered in October 2016 and they were arrested by the Major Crime Unit in December 2016 and charged.

The women all pleaded not guilty at their arraignment at the Serious Offences Court on Dec. 8, 2016 and were each granted EC$90,000 bail.

When the matter came up for hearing on Feb. 6, 2017, the hearing was adjourned as the prosecution had not yet completed their review of the file.

At the hearing on March 28, 2017, the defendants’ lawyers asked for an adjournment, saying that they were seeking a settlement with the company.

As part of that settlement, Frederick-Michael repaid EC$37,447.67, resulting in the charge against her being withdrawn.

Quammie agreed to repay EC$37,447.67 but had not done so at the time of the sentencing.

Martin agreed to repay E$28,124.24, and repaid EC$10,000 on Friday, the day on which sentencing was initially scheduled to take place.

In mitigation on behalf of her client, counsel Samantha Robinson told the court that Quammie is 37-year-old, unemployed, has no previous convictions, and pleaded guilty to the charge, thereby not wasting the court’s time.

She noted the principle of a one-third discount of any sentence being considered by the court if a defendant pleads guilty.

Robinson noted that Quammie is five months pregnant, adding that she is having a difficult pregnancy, and submitted to the court medical records to support this.

She said that Quammie is hypertensive and diabetic and this has been compounded by the fact that she hasn’t been able to drink enough water since she was taken into custody over the past few days of her incarceration since pleading guilty to the charge.

She said that the defendant is willing to repay the EC$37,447.67, beginning with an EC$10,000 payment forthwith and the balance over time.

The lawyer asked the court to consider a suspended sentence.

She said her client needs to have a medical procedure done next week and that given the conditions at Her Majesty’s Prisons, it would not be suitable accommodation for someone with a history of miscarriages.

Robinson asked the court to give Quammie six months in which to pay the amount and impose a custodial sentence if she fails to do so.

The lawyer argued that if imprisoned, it would be virtually impossible for her client to repay the money, adding that she has a supportive family that is willing to help her pay.

Speaking on behalf of Martin, her client, lawyer Patricia Marks told the court that her client is a 32-year-old mother of an 8-month-old daughter who is in pre-school.

Marks said that Martin is employed as a secretary and has no previous convictions and pleaded guilty to the charge.

Marks said that her client has repeatedly expressed her remorse for her action and understand the lasting negative effect that her crime will have and has already had on her life.

The lawyer pointed out that her client had cooperated fully with the police and her previous employer during the investigation.

She said that the period of incarceration between the guilty plea and sentencing has served as a “short, sharp shock” for Martin, which would resonate with her for the rest of her life.

As the lawyer spoke, tears streams down Martin’s cheek, converging on her chin.

Marks said her client had described her experience in incarceration over the past few days at horrible and throws herself at the foot of the court begging mercy.

The lawyer told the court that based on the facts presented by the prosecution, it appears that Frederick-Michael was the one who prepared the false documents that facilitated the theft.

She asked the court to consider the EC$10,000 her client had already repaid and asked that Martin be given time to make good on her agreement with her former employer.

Marks said that Martin’s family had rallied behind her as she continues to change her life.

She said her client has made a grave mistake and is trying to put her life back on track for herself and her infant daughter, knowing that the time will come when she will have to explain to her daughter the crime that she has committed.

Asked to make a submission on the sentence that the court should impose, Delplesche noted that the defendants held positions of trust.

“How could the position of trust be lost in the good things said about the defendants?” the senior prosecutor said.

He said that the defendants’ crime took place “in this hard guava crop”, a colloquial reference to tough economic times.

Delplesche pointed out that the defendants were fortunate to be employed, but betrayed their employers’ trust.

He further noted the elaborate nature of the crime, adding that it was not a case of someone simply stealing money from a cash pan and putting it in their pockets.

The prosecutor said the details of the case are troubling.

He further pointed out that while Quammie is pregnant now, she was not pregnant at the time of the crime.

“They are all adults. It is very troubling and I leave the rest to you,” Delplesche told the chief magistrate.

The magistrate agreed that the case was indeed “very, very troubling”, adding that the gravity was highlighted by the facts presented by the prosecution.

She said she did not think that even the defence counsel were prepared for the facts presented by the prosecution.

The chief magistrate further told the court that the case showed a level of sophistication and deception that is unmatched.

Browne-Matthias said that when people sacrifice and to pay their insurance, some even as they are paying mortgages, only to find out that such a crime has been perpetrated against them, “that person could be sent in a different state of mind that can’t be imagined”.

She said that in considering sentencing she had to consider the gravity of the offence, the sentencing guidelines, and precedence, including that set by that very court.

The magistrate noted a similar case involving Morris Prescott, the former head of the Buccament Wise and Prudent Friendly Society, whom she jailed for 12 months this year for stealing EC$84,000 of its money.

“The job of sentencing is never easy,” the magistrate said.

2 replies on “Pregnant woman, mother of newborn jailed for stealing $65,000 from insurance firm”