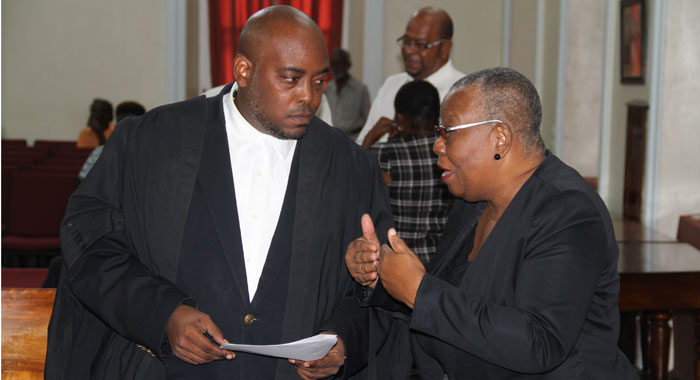 Supervisor of Elections Sylvia Findlay-Scrubb, right, speaks with Kenny Kentish, one of her lawyers, at the High Court on Tuesday. (iWN photo)

The High Court is considering a draft agreement by both sides in the election petitions, which, if approved, could see some unused ballots from the December 2015 general elections being inspected as soon as Wednesday morning.

Lawyers for the government in the petitions on Tuesday asked the High Court to approve a draft order reached by both the petitioners and the respondents.

Such an approval would make further hearings unnecessary on the application filed by the petitions on June 29, 2017 for permission to inspect the ballot boxes.

Kenny Kentish, a lawyer for the government in the matter, made the announcement about the parties’ position to presiding High Court judge, Justice Esco Henry at the beginning of what was scheduled to be two days of hearing in relation to the application.

His comments came after head of the petitioners’ legal team, Queen’s Counsel Stanley “Stalky” John, told the court that legal practitioners for the respondents had written to the court indicating that they have agreed that a certain course of action ought to be adopted in relation to the motion.

John told the court that he thinks it appropriate for counsel for the respondents to proceed in that regard.

In his presentation to the court, Kentish said that the draft order provides for inspection of the ballot boxes and ballot papers in four polling stations in Central Leeward.

The NDP is challenging the election outcomes in North Windward and Central Leeward, two of the seats that electoral officials say the Unity Labour Party (ULP) won for a fourth consecutive term in office.

The NDP rejected the results of the polls, in which eight of the 15 seats went to the ULP and filed the petitions challenging the results.

Kentish said that the draft order agreed on by both sides will, however, only allow for the inspection of documents related to CLF (Anglican Pastoral Centre, Layou), CLF 1 (Louis Straker Resource Centre, Layou ), CLB and CLB1 (Barrouallie Police Station).

Kentish told the court that the draft order contemplates that inspection is to commence at 9:30 a.m. on Wednesday, Oct. 25.

He said it was the intention of the respondents to appear before the court today and present the draft order for the judge’s approval.

In response, Justice Henry asked Kentish to cite the relevant legal provision that would allow her to approve such an order.

The lawyer said that the draft order fulfills the object of the application to inspect the ballot boxes.

He said that to the extent that such an order, if given, would be a consent order, the court is vested with inherent powers to review and approve the draft order, it being an order coming from the court.

Kentish further said that he had found no legal provision that would prevent such an order.

He said that the draft order intends for the sealed ballot boxes and their contents to be delivered to the registrar of the High Court.

Kentish said that in this way, he doesn’t think that there can be any interference with them.

In supporting the draft order, Keith Scotland, a member of the petitioners’ legal team, cited rules 51 to 54 of election petition rules as granted the court powers to approve such an order.