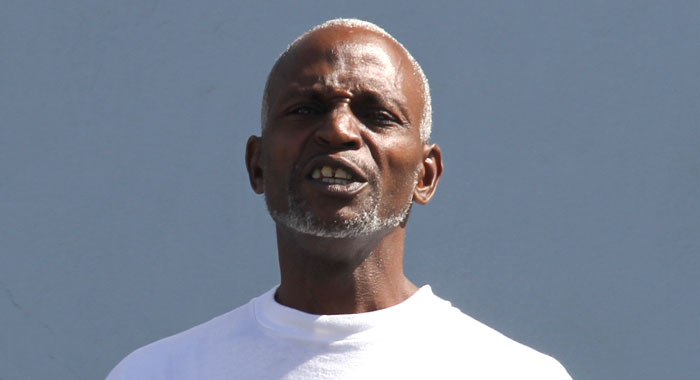 One of the two men charged with the October 2016 murder of a 10-month-old baby says that there is a war going on in St. Vincent and the Grenadines.

Martin “Jahson” James told iWitness News on Tuesday that two persons in Paul’s Avenue are his enemies, but claimed that they are being protected although they deal in illegal drugs.

“People protecting they friend that they say is small businessmen,” James shouted at iWitness News while under heavy police guard outside the court.

“Well, actually, all they doing is ordering people death and selling crack cocaine. The system is unable. They hand tied,” said the man who denied killing the baby.

He said the people of whom he spoke, two of whom he mentioned by name, attacked his “best friend”, his co-accused Ricardo “Shrek” McFee and his (James’) family in Diamond.

McFee has told the court that he was the target of the shooting at a shop in Diamond where gunmen fired some 40 rounds on patrons on Oct. 14.

One man was killed and seven survived their injuries in the incident, the worst mass shooting in St. Vincent and the Grenadines

“He just come out of jail. He didn’t do anybody anything,” James said of McFee, who was recently released from prison, having completed a sentence for firearm and ammunition possession.

James and McFee were on Oct. 26, 2017 indicted on a charge of murder in connection with the Oct. 7, 2016 shooting death in Glen of baby Mozary Lee.

The infant died after being shot in the chest when gunmen opened fire at Monty Hillocks of Belmont at the child’s father’s workshop.

The child’s parents, Shelly-Ann Durham and Mozart Lee, were shot and injured during the same incident.

In April this year, at the end of a preliminary inquiry, the men were discharged on a count of murder related to the death of the child and two counts of attempted murder, related to the injuries the child’s parents sustained.

The men were discharged as the Serious Offences Court upheld no-case submissions by the men’s lawyers.

James noted that he was discharged on the murder charge and has been arrested again and indicted on the same charge.

He said this was done “just to keep us off the street for a couple years.

“Not to say we’re going to have a speedy trial next month or next two months. They’re going to try to keep us locked up,” he said.

James claims that while he is incarcerated, two persons whom he mentioned by name, will continue selling cocaine in Paul’s Avenue.

He said that the two persons he identified are “scared of us and we ain’t attacking them”.

Told that he was making serious allegations and implicating persons, James said,

“I calling the people name who I know is my enemies.

“Is a war going on the streets. Everybody know this. But they have friends in high places who protecting them,” he said.

James said that he has done nothing wrong.

“I have a family [at] home. I have three children going secondary school, in Form 4, getting ready to write subjects.

“I got a little girl. Look where I live. I live right there, I didn’t commit any crime, people know this too. I’m getting victimised,” James said.

In addition to the indictment on one count of murder, James and McFee have been charged with the attempted murder of Hillocks.

The third and fourth counts, two wounding with intent charges, relate to the shooting of Durham and Lee.