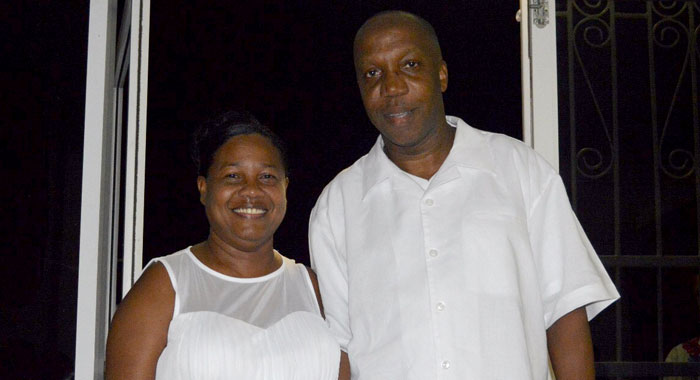 The Colonarie Magistrate’s Court — sitting in Georgetown — re-convened on Thursday, the day on which Magistrate Rickie Burnett and his wife, Maria, celebrated 25 years of marriage.

Prosecutor Delroy Tittle congratulated the magistrate on the accomplishment, noting that it is a long time to be married.

Tittle joked that he does not know if his wife can tolerate him for so long, adding, more seriously, he too will reach his silver anniversary of marriage.

Defence counsel Roderick Jones also congratulated the magistrate, adding that not many people can testify to celebrating 25 years of marriage.

Burnett thanked the prosecutor and counsel for their congratulatory remarks, adding that 25 years is a long time.

“I got up this morning and realised that my wife did a good job,” Burnett said, adding that he knows that he can be a handful.

He told both prosecution and defence that the anniversary means that he might not have a full day at court, but promised that he would do his work.

Speaking to iWitness News after he had disposed of all matters for the day around 2 p.m., Burnett told iWitness News that marriage is a commitment for life.

“When I got married, I was at a mature age so I think that helped. Apart from that, I think the almighty God was the one that helped us in sustaining these 25 years.”

He said that there were difficult times, nothing that two persons are different and in a marriage, the parties have to try to adjust and accommodate each other.

“You have to remember the vows that you made when you decided to get married. So, after 25 years, I give God thanks, I want to thank my wife for sticking it out and being there for me and I being there for her,” Burnett told iWitness News.

“You did mention to me that I look pretty young. That is true, but I am old enough. I am 52 so you have an idea of how old I was when I got married. I try to keep myself young, but I’m 52,” said Burnett, who has been a public servant for 33 years and a magistrate since July 2011.

“So today is a joyous occasion for me and I give the almighty God thanks and I look forward to spending the rest of my life with my wife.”

“I always see life as this: we’re not perfect on earth. Both individuals are really different individuals. What you have to do, you have to accept the persons as he or she is and once you do that, you should be fine.

“My wife is far different from me, but, at the end of the day, we have made a commitment to each other to be with each other for life, and so far, we have done 25 years.

“As I have said, not perfection, because we are not in a perfect world, but that’s where we are. We love each other and we intend to spend the rest of our lives with each other.”

Burnett and his wife celebrated their silver anniversary with an event involving family and friends Thursday night.

One reply on “Magistrate celebrates 25 years of marriage”