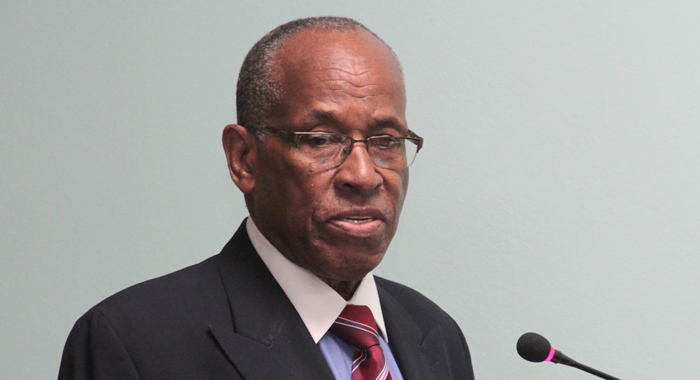 The St. Vincent and the Grenadines Coast Guard Service has recently received a proposal from Swiftships, United States for a 35-metre (115-foot) offshore patrol vessel.

Deputy Prime Minister Sir Louis Straker told parliament on Tuesday that the vessel has the capacity to enhance patrol of the territorial waters, 12 nautical miles from baseline.

“It will also provide additional search and rescue capacities range and duration of searches to complement our current fleet of vessels,” Sir Louis said.

Sir Louis was responding in the absence of Prime Minister and Minister of National Security, Ralph Gonsalves, who was “indisposed”.

In the question tabled by Opposition Leader Godwin Friday, it was noted that vast stretches of seawater comprise part of St, Vincent and the Grenadines, an archipelagic country.

“Thus, there is a critical need for effective territorial patrol and search and rescue capabilities in our coastguard service. This is so considering the many lives that have been lost in mishaps in our waters in recent years, such as occurred earlier this year when six persons were lost while travelling by boat between Canouan and Mustique,” he said.

“Accordingly, will the Prime Minister and Minister of National Security please state when the St. Vincent and the Grenadines Coastguard Service will be outfitted with an offshore patrol vessel to complement the existing small crafts and enhance territorial patrol capabilities, enforcement of fisheries laws and search and rescue operations in our waters,” the opposition leader said.

Having received Sir Louis’ response, Friday told parliament he wished Gonsalves were available so that he would ask for a bit more specific information “about timing and so on.

“But I suppose we can get that later,” Friday said.

St. Vincent and the Grenadines had been without a major Coast Guard patrol vessel for some years since the decommissioning of the Mulzac and McIntosh some years ago.

The largest operable vessel in the fleet is said to be the 40-foot long Hairoun.

However, [at] about the same time, the Obama administration committed to donating three RHIGs to the SVG Coast Guard, two of which have been delivered, while the third is taking some time.

“It is a matter that we have to discuss with the Coast Guard commander and to get their advice as to what kind of additional vessel or vessels that we should go for.”