After a year, exposed bodies to be re-buried in Sandy Bay 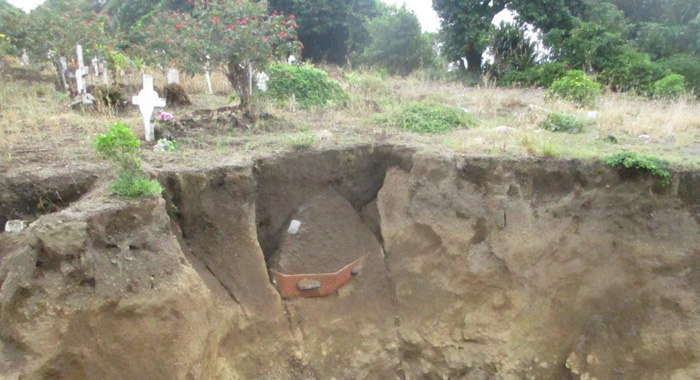 The Sandy Bay cemetery with coffin sticking out of the ground. Tombstones are down and most of the earth is removed.

It will take yet another two months for the government to address the situation at the London Cemetery in Sandy Bay, where heavy rains exposed a number of graves a year ago.

“The government expects that within two months, the problem of compromised graves at London, Sandy Bay will be comprehensively addressed and that the old cemetery site will be restored and protected from flooding. This will be treated as a matter of urgency,” Minister of Health, Sen. Luke Browne told Parliament on Tuesday.

He was speaking in response to a question from opposition lawmaker, Member of Parliament for the Southern Grenadines, Terrance Ollivierre.

Ollivierre asked Browne what is being done to address the problem with the cemetery at London, Sandy Bay which was damaged by flooding; leaving bodies exposed and, therefore, posing a health risk and desecration of the deceased.

Browne said that he and a team from his ministry visited the cemetery on the weekend in preparing to answer Ollivierre’s question.

“I always like first-hand information,” Browne said, adding that he had helpful onsite discussions with the Minister of Housing and Parliamentary Representative for North Windward, Montgomery Daniel, and Bishop Melford Pompey, who works with local government in North Windward.

He noted that rushing water associated with torrential rains caused initial damage to the cemetery on Nov. 29, 2016.

The damage resulted in the exposure of coffins and human remains.

“There was a quick response from stakeholders during the course of which the exposed graves were covered and plans for major restoration work and identification of a new cemetery site initiated.”

Browne said that in recent times, additional rains have caused one coffin to become exposed “without creating a major public health concern”.

The health minister told lawmakers that the Attorney General has advised on the legal procedure to be followed for the dis-interment and then re-interment of the bodies and has given “the green light from the standpoint of the law”.

The Cabinet, on Oct. 4, 2017, mandated a group of public servants to meet under the chairmanship of the Permanent Secretary in the Ministry of Health, Cuthbert Knights, to discuss the possible relocation of the Sandy Bay Cemetery.

Several possible sites for a new cemetery were discussed but it was decided to expand the current cemetery onto an adjoining piece of land, which is actually part of the cemetery property, but which has never been used and is separated from the site of active burial by a small water channel, Browne told Parliament.

“BRAGSA has been asked to open up access to this adjoining piece of land and to do light surface works to clear the way for the use of this new site.”

He said the use of the new site is a short-term solution as the government anticipates that in three to five years, there will be a need for additional burial space.

The restoration work at the old cemetery site will be simultaneously carried out alongside the works to expand the cemetery, Browne told Parliament.