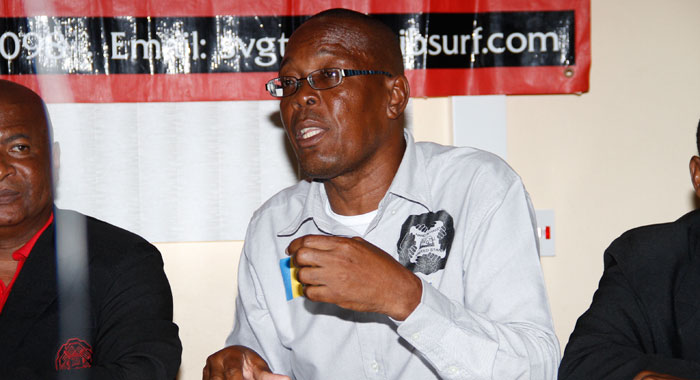 The decision of the Unity Labour Party (ULP) administration to begin paying, as of January 2018, graduate salaries to some 100 teachers waiting more than five years for appointment is intended to avert a lawsuit, the Teachers’ Union says.

Otto Sam, industrial relations officer for the St. Vincent and Grenadines Teachers’ Union told a press conference in Kingstown, on Tuesday, that the union will still take the government to court over payment for teachers who have retired without being appointed to graduate post.

Sam said that the union is also suing the government on a number of other matters.

In his independence address to the nation on Oct. 27, Prime Minister Ralph Gonsalves announced that some 100 graduate teachers who have been waiting for up to five years to be appointed to that level will be paid graduate teacher salaries as of Jan. 1, 2018.

Gonsalves, who is also Minister of Finance, said that teachers from the graduating year 2013 onwards who have not yet been appointed to the grade of graduate teachers would be appointed in annual batches over the next three years until all of them are appointed.

Sam told the press conference that some teachers have been waiting for up to a decade to be appointed to graduate positions.

He said the issue was raised at the union’s press conference in July and also with the Ministry of Education and the Public Service Commission. The executive of the union had raised the issue with the prime minister repeatedly over the years.

“We just want to remind our members, our teachers, that what has transpired is that the government, through its chief spokesperson, has finally fully complied with article 26(2) and article 27(3),” Sam said.

He noted that article 26(2) of the agreement says that an employee shall be appointed to a position commensurate with his or her qualification within reasonable time of the completion of his or her studies, providing that the Ministry of Education has approved such studies.

He said there are teachers whose areas of study were selected and approved but are yet to be appointed a decade after completing their studies.

Sam said the union raised it with the government many times and then decided to have the court speak on the matter.

“Once the ultimatum [was] given to the Ministry of Education, the Public Service Commission, etc., and the government, by extension, they were forced, because they understood that the court would have ordered that, and the court would have ruled that beyond three years is unreasonable time.”

He mentioned that among the teachers who have been waiting for a decade for appointment, is the union’s Public Relations Officer, Wendy Bynoe, who obtained a first degree in 2007 and a master’s in 2012.

“And there are many others like that,” Sam said.

“So the state understood that the union’s case was overwhelmingly strong and so, the state actors were forced, because of the union’s initiative to initiate legal action, to appoint these teachers to finally honour article 26(2) and article 27(3).

“We want members to understand that it was not a free ride; they had nothing free, there was no good Samaritan, it was the union’s work, the advocacy of the union, it is the hard and dedicated work of their executive and their collectivism which allowed and forced and influenced the state to finally adhere to the very letter that they signed on to.

“The government knew that any court in a civilized society would have deemed it unreasonable, unfair, irrational and illegal for teachers to have a second degree — not just a first degree — for 10 years, and not being appointed [to] graduate [level] when the collective agreement dictates and reads that these people should be appointed within reasonable time.”

He said that in St. Lucia, when a teacher completes a first degree, they take their certificates to the human resources department and are moved to graduate pay instantly.

He said millions of dollars would have had to be paid out to teachers if the court had ruled on the matter.

“In fact, the union is still moving forward and having the court speak to the unfair treatment, the injustice, the unreasonableness of a number of these teachers who have since retired…”

The union is also taking the government to court on the issue of promotion.

Sam said the union is in the process of challenging the way in which some teachers seemed to be “discriminated against or debarred from promotion to principalship”.

He said there are teachers who are more qualified than their peers, have an excellent work ethic and apply for the post of principal as recently as August 2017 and were the most experienced and qualified but were not promoted.

“Those teachers and their union are challenging this modus operandi. In fact, it is clear that the status quo cannot remain where teachers are adequately qualified, very experienced, invest lots of money and family time into their studies and when it comes to promotion, you are being debarred, virtually discriminated against and you are not being appointed.”

He said the union will also go to court over the government’s failure to pay annual EC$1,000 allowances to teachers who work in special education.

“We are in civilised society where the rule of law still governs and where we don’t always have to pound the table and be on the street. And so the union will test these in the court.”

Sam further said that graduate teachers are being treated unfairly in that they are not being granted at least 45 days annual leave once they are at Teacher IV and above.

He said the Ministry of Education and the Public Service Commission (PSC) have been giving these teachers 18 days annually.

Sam said that the union knows that the PSC and senior public servants would sometimes disregard the collective agreement although the court has ruled twice on its validity and has made orders consistent with its letters and agreement.

He, however, said that the Civil Service Orders say teachers reaching annual salary of EC$18,312 ought to have 30 days vacation.

“So even if the Public Service Commission does not honour, does not follow the Collective Agreement that says 45 days, the Civil Service Orders speak to 30 working days for graduates.”

Sam said he wants graduates to assist the union in ensuring that the collective agreement is honoured by stop accepting 18 days.