Owia Arrowroot Factory should be ready for month end, but… 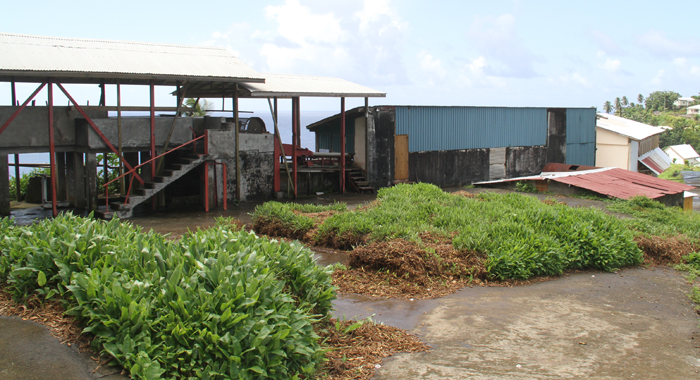 Heaps of arrowroot rhizomes were rotting and growing outside the factory in Owia last month. (iWN photo)

Minister of Agriculture Saboto Caesar says his ministry plans to have the factory at Owia ready by the end of November for the commencement of the arrowroot harvesting season in December.

His comments came within the context of thousands of pounds of rhizomes rotting and taking root outside the factory yard this year because of mechanical problems at the factory.

“I am advised by the technicians that the factory will be ready, however, my experience advises me that the best plans, when you have to wait on other stakeholders and parties, there can be possible postponements,” he told Parliament on Tuesday in response to a question tabled by opposition lawmaker Roland “Patel” Matthews.

In the question, read on his behalf by Member of Parliament for West Kingstown, Daniel Cummings, Matthews asked the minister to say what was the state of readiness of the Owia Arrowroot Factory to grind rhizomes in the upcoming season.

Matthews also wanted to know if the agriculture minister could assure Parliament that the arrowroot factory will be ready and operational by the first week of December 2017 and if not, then why not.

Caesar said he has had a conversation and several meetings with the technical staff and management and they indicated that the factory will be ready.

“I, however, will give the context against which this claim has been made,” he told Parliament.

Caesar said that works at the factory over the last 12 months included the completion of a drying house extension of 20 feet by 40 feet, the conversion of a storeroom into a changing facility for workers, the renovation of washroom facilities, repair to the loading ramp, concreting of the floor of the factory, repair of driers, work on beam reinforcement, fixing of the cleaning vats, and repair of several leaks on the sedimentation table.

The agriculture minister said that the Ministry of Finance will release EC$200,000 to commence additional repairs to the factory.

Before the end of this month, the drying racks will be completed, the opening on the base of the collecting trays will be sealed, the vats will be coated with epoxy, 500 blades will be ordered, the housing of the mill will be cleaned, the gear oil on motors changed, the building power-washed, and trees above the water line cut, Caesar said.

“So some of them are the routine work that will be done. The ordering of the blades, something that has to come in from overseas and the budget of $200,000 is something that is set to address this.”

Caesar said a work plan has been developed and the implementation has commenced on the critical issues.

“And it is expected that works will be completed before the end of November 2017 in preparation for the upcoming season.”

He said a newly appointed general manager, Selmon Walters, has taken over from Cauldric Browne, who has retired and the Ministry of Agriculture held discussions with WINFRESH for the sale of three tranches of 27,000 lbs per tranche of processed arrowroot starch.

One reply on “Owia Arrowroot Factory should be ready for month end, but…”