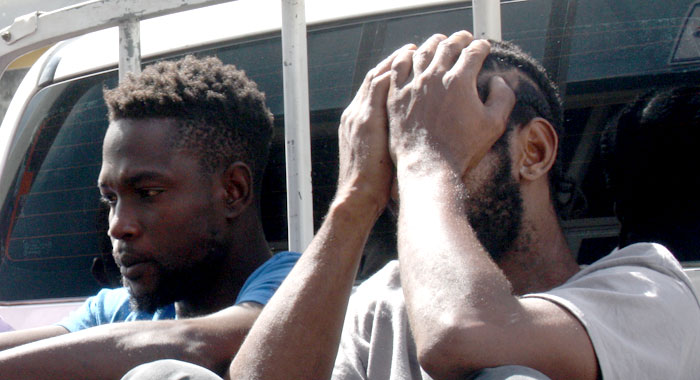 Grenadian Ronald Thomas, 33, on Thursday received three prison sentences when he reappeared before the Serious Offences Court on charges of trafficking, attempting to export and possession of marijuana.

All sentences to run concurrently

Thomas and Vincentian Reynold Humphrey were arrested around 1:40 p.m. Monday when Vincentian Coast Guard officers intercepted them in a go-fast boat in the waters off Owia in northeastern St. Vincent.

Both men were arrested after throwing nine nylon sacks and two plastic bags from the speedboat. The bags were retrieved and when one was cut open, it was found to contain cannabis. The men, the sacks and bags, and the speedboat were taken to the Coast Guard base in Calliaqua.

The narcotics division of the police force was informed and Corporal Iracki Huggins was dispatched. At the Coast Guard base, all the other sacks and bags were cut open and found to contain cannabis.

The men were later charged, jointly.

When the appeared before the Kingstown Magistrate Court on Tuesday, Thomas pleaded guilty to all charges while Humphrey pleaded not guilty.

As a result, prosecutor Inspector of Police Elgin Richards asked that the matter be adjourned and transferred to the Serious Offences Court for Thomas to be sentenced the following day. Humphrey was granted $20,000 bail but when the court was adjourned for the day there was no surety present to sign his bail.

They were both remanded in custody.

When they appeared before the Serious Offences Court on Wednesday, the charges were put to them again and they maintained their pleas.

The prosecution, led by Senior Prosecutor Adolphus Delpesche, said they were proceeding against Humphrey. The court then set Jan. 29, 2018, as the date for his trial and he was released after a surety signed his bail.

Defense lawyer Grant Connell, in mitigation, said Thomas was a labourer and father of three. He said Thomas came to St. Vincent legally in January and cleared Customs and followed procedure.

Connell said that Thomas pleaded guilty at the first opportunity and has shown remorse for his action. He said he was given a job to drop off the marijuana at a place where it was requested and Humphrey had hitched a ride to go to Bequia.

Commenting on the quantity of the drug, Connell said 373 pounds was a “relatively small amount” of cannabis, given its origin – St. Vincent and the Grenadines.

He asked the court to consider that Thomas, as a non-national, should not be a burden to taxpayers and should, therefore, be given a non-custodial sentence and sent home.

He proposed that the go-fast vessel seized at the time of the interception be forfeited to the state and be used by law enforcement authorities in patrolling the waters of the Grenadines to reduce the incidence of yacht break-ins.

Connell said that the boat was valued $45,000 and that value could go towards a fine imposed by the court.

“The jails are full and the coffers are empty,” Connell told the court in his bid to strengthen his proposed non-custodial sentence.

Delpesche, in his response, noted that Thomas pleaded guilty to the charges of possession, attempting to export and trafficking.

The prosecutor said that the defendant was, therefore, entitled to a discount on sentences as a result.

He said that in as much as the cannabis may have originated in SVG where the quality is deemed to be very good, based on reports, it is still illegal and the laws must be enforced.

Delpesche further said that discretion is used from time to time but the law is still the law. He said that Connell viewed the quantity of drug as relatively small but the fact was that “when measured on the scale it is a lot.

“And that is what the court is going by,” the senior prosecutor added.

Meanwhile, Delpesche and Connell both commended the local coast guard and arresting officer, Corporal Iracki Huggins, of the Narcotics Division for the speed with which a report was done on the Grenadian national and the boat seized.

Delpesche said the report was done within 24 hours — quite an improvement on what sometimes takes days or longer.

Thomas was further remanded Wednesday for sentencing on Thursday as Chief Magistrate Rechanne Browne-Matthias said she needed to look at his antecedents provided by Grenadian authorities.

The defendant was also said to be wanted in his homeland.