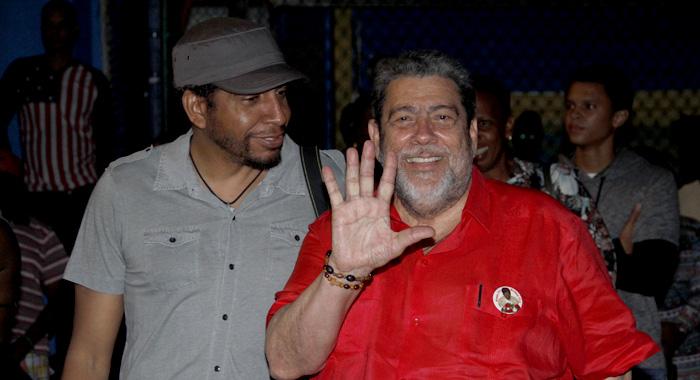 Amidst talk that last week’s Cabinet reshuffle was the first major move toward leadership transition with the Unity Labour Party (ULP), Prime Minister and party leader, Ralph Gonsalves, says he has “optimal timeframes” for the changing of the guard.

“But this is a matter that has to be dealt with by the party as a whole,” he told a press conference on Monday, days after he handed over the Finance ministry to his son, Camillo Gonsalves.

The prime minister has long said that he would not lead the ULP into another general elections but would stay on as a candidate for North Central Windward, which he has been representing since 1994.

Camillo is now the only other person in the ULP’s four term administration to serve as finance minister.

Political observers have interpreted his appointment as that the prime minister is tipping his hand towards his son.

However, some ULP supporters and Vincentians at large have said that Minister of Agriculture Saboto Caesar, 36, who is senior in Parliament to Camillo, 45, should be the next head of government.

“But these are not parliamentary positions,” he said, noting that the prime minister is selected by elected MPs.

Gonsalves, however, said that ULP parliamentarians would be guided by what the party says.

Gonsalves said the nation could expect that there will be  “a political process”.

He said that in 1998 he had urged Stanley “Stalky” John to take the position of deputy leader of the ULP, because he would not have been able to beat him as leader.

Stalky had a different view and lost, said Gonsalves, who led the ULP to office three years later.

“And, for a period of time, there was, even in the House, people could have seen the differences where Stalky and Ken [Boyea] were trying to take positions which were different from the rest of us — the party.”

He said Stalky and Boyea had discussions going on with Sir James and “there was this fantasy that they could secure office by doing a deal with [then prime minister, Sir James] Mitchell and to keep Ralph and Louis and other people and Vincent — well, the real world ain’t so neat you know, and, eventually, we know what happens.

“They went their own ways and the party stayed on course and won the elections handsomely and has stayed in office since then. And the proof of the pudding is in the eating. We were right and they were right,” Gonsalves said and started to giggle.

He said that “fortunately” they have built a certain espirit de corps in the party over the years that “I think we are going to see a very smooth transition.”

“Don’t take lightly when I tell you that the ULP is a family and the difference, organisationally between the ULP and the NDP is that the NDP is a coalition of electoral elites and the ULP is driven by a political vision,” he said at the press conference where he was asked to comment on the attacks by ULP spokesperson Frank Da Silva on the party’s house speaker and ULP caretaker for South Leeward, Jomo Thomas.

“You look around, you really don’t leave ULP you know. It’s a family. You might go and keep quiet a while, you may involve in all kind of thing but you don’t leave family. And those who have chosen to leave the family, the family closes ranks against those who think they can leave the family and upset the enterprise,” Gonsalves said.

One reply on “PM has ‘optimal timeframes’ for new ULP leader”