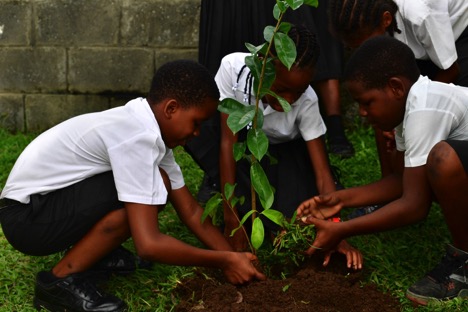 The Ministry of Agriculture in collaboration with the Richmond Vale Academy and the St. Vincent and the Grenadines Preservation Fund launched the National Soursop Planting Project at the Diamonds Primary School on Nov. 9.

The students of the school were given the privilege to plant the first set of soursop trees on their grounds.

In attendance were one of the founders of the St Vincent and the Grenadines Preservation Fund, Louise Mitchell, representative from the Richmond Vale Academy, Stina Herberg and Minister of Agriculture, Rural Transformation, Forestry and Fisheries, Saboto Caesar.

The National Soursop Planting Project is geared at planting 1,000,000 soursop trees throughout the country. This project forms a part of the Ministry of Agriculture’s Agri-export Strategy Initiative, which has been developed to increase agricultural export.

Mitchell expressed gratitude at being part of the project while sharing an interactive and educational speech with the students.

She also donated a book, “Wild Life in the Caribbean”, to the school’s library.

Herberg said she was excited she was to play a vital role in the project.

Caesar expressed his gratitude to the SVG Preservation Fund for contributing US$20,000 to Richmond Vale Academy for propagation and contribution of the first 6,000 soursop trees to the project.

The minister indicated that the project would play a vital role in the diversification strategy of the Government of St Vincent and the Grenadines.

He informed the students that there would be trees available to students who would be interested in planting their very own soursop trees.

He encouraged the children to “Dream, but dream big, think, but think big.”

He said: “Once you dream, you can achieve it.”