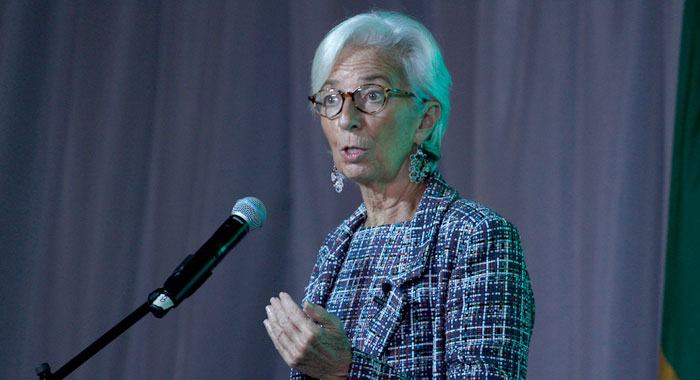 KINGSTON, Jamaica — Head of the International Monetary Fund, Christine Lagarde, says crime and youth unemployment continue to be significant impediments to economic growth in the region.

She told the one-daySixth International Monetary Fund (IMF) High Level Caribbean Forum here on Thursday that youth unemployment in the Caribbean is among the highest in the world.

“Crime — partly fuelled by this high rate of joblessness — is a major obstacle to economic growth in the Caribbean,” told the forum, which was held under the theme “Unleashing Growth and Strengthening Resilience”.

The forum focused on the unique issues the Caribbean region is facing and the opportunities that can be found within to cope with the changing global landscape. Among the key topics for discussion at the conference are, “The Caribbean Growth Challenge: Crime and Youth Unemployment”, “Fiscal Policy and Political Cycles”, “Financial Sector: Stability and Growth Trade-offs”, and “Challenges and Opportunities in the Caribbean”.

She said that in a recent study, the Inter-American Development Bank found that, on average, crime in the Caribbean costs nearly 4 per cent of GDP per year –more than in most Latin American countries.

“So we need to create a virtuous as opposed to a vicious cycle, where strong growth would reduce high unemployment and in particular youth unemployment and crime which, in turn, would contribute to boosting productivity and growth and improve this business friendly environment, without which investors are reluctant to invest.

On the topic of fiscal policies, stronger institutions and political cycles, Lagarde said that politics and electoral cycles can have a strong impact on fiscal policies and economic outcomes.

She said this is a phenomenon that has been observed around the world, and has also played a major role in shaping economic developments in the Caribbean.

“Too often, promising reforms have been cut short by policy reversals driven by political pressures,” she said, adding that while this does not occur in all cases, it is quite common.

“Indeed, such a rule targeting a reduction in public debt to 60 per cent of GDP over the medium term has been introduced in several countries in the region—the Eastern Caribbean Currency Union—and has had success in putting public debt on a clear downward path in St. Kitts and Nevis, Grenada, and Jamaica.

“The experience of these countries, which in the main has been very successful, provides a good example for other countries in the region.”

“This has led to rising social and economic challenges —including poverty, inequality, unemployment, and crime.

“While many authorities in the Caribbean were successful in their efforts to create a stable macroeconomic environment, growth still remains elusive.”

She said that while many authorities in the region have made the effort in terms of macro-economic stability, growth “is somehow resisting those efforts.

“And it is actually a bit of a puzzle as to why that is and one really needs to explore what are the reasons,” Lagarde said, adding that there is no single explanation as to why growth is still lagging behind despite the efforts that have been undertaken.

She said there are some familiar explanations, including the external shock such as natural disasters, loss of international trade preferences and impact on agriculture., which she said is an important source of growth.

“At the same time, the Caribbean has not been able to fully insulate [itself] from such shocks because of large macroeconomic imbalances. Growth has also been affected by structural impediments,” Lagarde said.

Among these structural impediments, she mentioned the high cost of electricity, limited access to credit for households and medium and small enterprises, high rates of violent crime, and a persistent outflow of highly-skilled workers – “the well-known brain drain”.

She said the conference has been organized to tackle the theme in a very organised way, adding that the addenda covers topics that the IMF is not necessarily an expert on.

“And we will be learning in the process she said.”