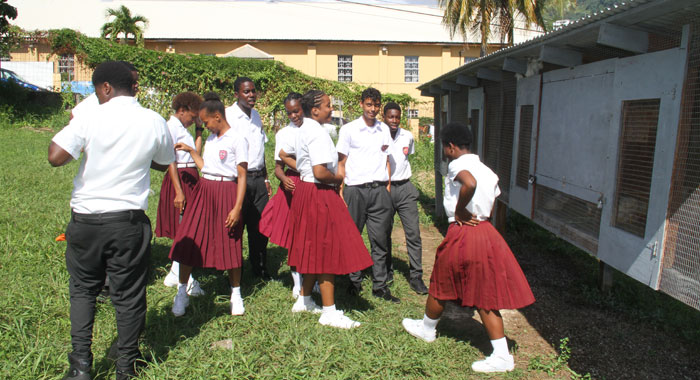 A project that could determine the school-leaving performance of agricultural science students at Bishop’s College has been thrown into jeopardy because of the theft of almost 75 per cent of the broilers the students are raising.

Sarwan Gibson, a form 5 business student at the school, located in Kingstown, said that they bought 100 broiler hatchlings on Oct. 25.

The birds were separated into two groups — experimental and control.

The experiment called for the experimental group to be fed only starter for seven weeks and finisher for one week before slaughter.

The control group would have been fed the regular regimen of starter, grower and finisher.

The students would have recorded the impact on the birds in the different feeding regiments.

“Locks were put on the pen and they were secured properly, but [burglars] destroyed the hinges and locks to get to the birds,” Gibson told iWitness News on Tuesday.

He said the crime will have a huge impact on the project.

“This is basically our practical — SBA [school-based assessment] — and because we don’t have the 100 birds still, we will not be able to put back the amount of money that we have already spent. And this is supposed to be done for CXC and not being able to show the full potential that we were supposed to be given, it will have a huge impact on the SBA,” Gibson said.

Mackayla Williams, another Form 5 business student, told iWitness News that what was done to them “is totally unfair”.

She also spoke about the impact of the theft on the experiment.

Williams said that the project was being done in collaboration with students in Barrouallie.

She told iWitness News that the project will also be a financial loss and the money that would be generated would not be enough to buy hatchling for the current form 4 students when they reach form 5.

The students’ teacher, Ashley Browne, told iWitness News there were three burglaries since the chicks were bought, the first being within two weeks of the purchase.

He noted the importance of the project to the students’ SBA and said that they are planning to now split the birds into two groups and still try to conduct the experiment.

“Hopefully, this is the last of the burglaries,” he said.

The burglaries are occurring although there is 24-hour security at the school and there is a light in the area where the coop is located.

“It is very sad because this is supposed to be for the kids’ education and somebody is using it for their advantage to come in and steal the birds, which puts us at a disadvantage because the school is spending money for this project.

“This has been happening for years. It is not the first time,” he said.

The official noted that while in the past, broilers were stolen when they were closer to the age when they could be slaughtered, the theft, this time, is of birds that are just 2 and 4 weeks old.

The theft at the school represents a wider problem of praedial larceny in St. Vincent and the Grenadines.