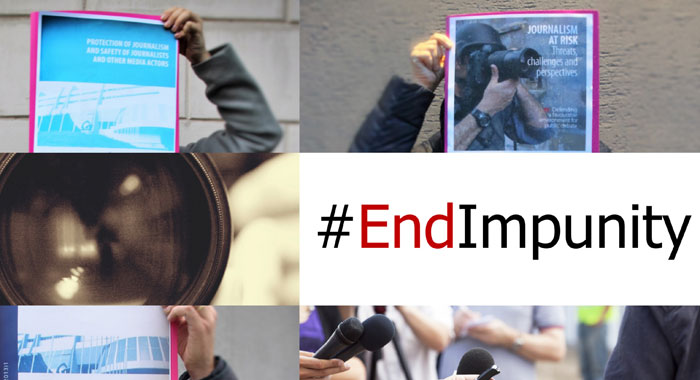 The International Federation of Journalists (IFT) is reporting that so far this year, 54 media professionals have been murdered in the line of duty while other statistics show that 1856 journalists have been killed worldwide since 1992.

In 2011, the United Nations (UN) named journalism as one of the deadliest professions in the world.

But, while a journalist has never been killed in the line of duty in St. Vincent and the Grenadines (SVG), a trend has been seeping its way into local journalism: that of threats being issued to practicing media people.

Over the past few months, the majority of these threats have come outside the Serious Offences Court in Kingstown as journalists attempt to photograph accused persons.

The latest incident came on Oct. 19 when Collin “Coco” David appeared at the Serious Offences Court on a second firearm charge this year.

David was about to spit on two reporters, Kenton X. Chance and Lyf Compton, when a senior policeman stopped him. The day after the incident, a person close to David threatened to have a journalist killed for attempting to take the accused man’s photo.

But while some persons argue that the threats “come with the territory”, issuing threats is still illegal under the laws of SVG.

Commenting on the issue a few months ago during a visit to Belgium by journalists and other media personnel from the Eastern Caribbean, Head of Human Rights and Safety at the IFJ, Ernest Sagaga, described the mounting threats against journalists as extremely serious.

“… the threat is so acute in the media that we (IFJ) started publishing annual reports on journalists and media staff killed for their work since 1990 and today we have over 3000 journalists killed, murdered because of their work,” said Sagaga while speaking to Caribbean journalists at the International Press Centre in Brussels.

The former reporter who worked with the BBC for 10 years, said that while person correct note that journalists die while covering war and unrest, this is not the whole truth, because statistics show very clearly that there are more journalists and media staff who are murdered and targeted for murder in various communities even in so-called peace time.

“… because you expose corruption, somebody want to silence you, they don’t hesitate to come and gun you down. Don’t think that wars are the only reason we are losing people, they are many other reasons,” Sagaga stressed.

The Head of Human Rights and Safety at the IFJ noted that in many countries, not far from the Caribbean, Mexico for instance, there are journalists who now refuse to do investigative journalism and instead prefer to follow soft issues like fashion because they fear the violence that they see.

“We have to appreciate that and do something about it,” said Sagaga, adding that the IFJ has several things that they do to help.

“We do all we can to train people to know how to behave, the routine to follow, how to detect that you may be in trouble, because there are signs that you can detect to know that something is coming,” Sagaga said.

He said the IFJ has made some strides in this area, having obtained insurance for its members that include arranging evacuations and medical services, and “if the worst comes to pass”, caring for loved ones.

“We are proud to do this because many insurance companies have in the past refused to cover journalists but we have managed to include in that cover for –kidnapping and ransom — because many countries refuse to touch ransom negotiations, but through that company we can get negotiators to make sure that a bit of money can be paid to save someone,” said Segaga, stressing the dangers that come with the profession.

Another area of dealing with threats and danger is refusing to go on certain assignments, Segaga noted.

“If you are a journalist and your boss wants you to cover a story and you don’t feel comfortable, you can say, sorry I simply don’t want to go”.

Sharing an incident, Segaga said that he had a colleague a few years ago that had a freelance contract with an organisation and she was promised a full-time post if she would go to Somalia.

He said that the lady did not want to go but went anyways because of the promise of a full-time job, but she was shot and died while on the assignment.

“… and I’m sure she would not have gone if it was not for the promise. Sometimes we can past because we are not superman or superwoman,” Segaga said.

He said that the IFJ wants journalists to feel comfortable in saying no, without suffering repercussions “… and that is something we drill into our members, I believe that safety is first and the foremost responsibility for journalists themselves”.

He said that for many media people around the world, violence, including killings, are on the rise, and the IFJ reports, are being done, to not simply say, “we have a problem but to make these publications a tool for our campaign and our advocacy”.

Sagaga told journalists that in recognising the trend, they have designed levels of intervention that include individual safety training.

“I am talking about safety really, the individual level. What we do, we advertise safety training so that they can access the risk that they may be facing when they go to cover events.”

But while journalists should look out for their safety, Segaga thinks that media owners and governments have a “duty of care if you want somebody to go and cover a war or even a protest”.

Segaga said that journalists are being targeted by all sides and spoke about unrest in Caracas, Venezuela and the IFJ sending flak jackets for journalists although they know that is not enough to protect the media workers.

He said that media owners and even governments should look after journalists and make sure that they have tools like basic training and some kind of protection before going out.

“And at the same time, we want governments to be aware that journalists are there simply to report and not be taken for opposition members and spies. We see many journalists being accused of spying and this is very crucial because we have a very serious problem that if you look around the world where there are conflicts there are now fewer and fewer correspondents being sent there.

“The reason is very legitimate and very understandable when you see over the last few years where we have colleagues beheaded by terrorists. This has really given people food for thought,” Segaga said as he noted that fewer and fewer journalists are trying to make a name for themselves by covering certain issues while the ones doing so are doing it without the proper training, cover and a lack of the reality about going to these places and exposing themselves.

“We really need senior editors to look after their staff and we want the governments and any other group or political group to be aware that journalists are there to do a particular job,” Segaga said.

However, he said that although the IFJ has been saying this for many years, “we don’t seem to be making any headway because governments are not taking it very seriously so what we are doing we are asking organisations like the various unions, the United Nations and the Organisation of American States (OAS) to bring pressure on these governments because they have international obligations and we want them to uphold their obligations”.

He said that the IFJ stands ready to discuss the issue of journalists and the challenge for impunity on the violence against journalists.

“The issue is on the international agenda and it is not enough to have it on the international agenda, we want action and we are trying to come up with a strategy to put pressure on government because that is really where pressure should be taken because they have the primary responsibility for law and order as we all know,” Segaga said, adding that this is not something the IFJ can do alone.