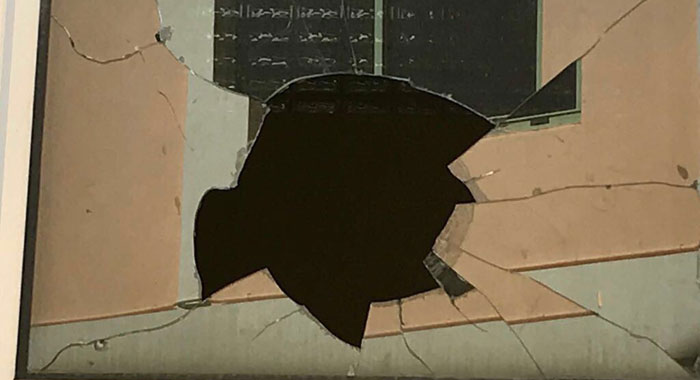 Democrat House, the headquarters of the main opposition New Democratic Party, was vandalised between Wednesday afternoon and Thursday morning, the second such incident at the Murray’s Road building in 18 months.

Four panes of glass at the building were shattered, general secretary of the party, Tyrone James, told iWitness News on Thursday.

James said that about 4 p.m. Wednesday, the staff locked the building — where the Office of the Leader of the Opposition, Godwin Friday, is also located just on the outskirts of downtown Kingstown.

He said that when they returned about 9 a.m. Thursday, they found “glass with bricks and so on, concrete blocks scattered along the floor”.

James said he checked and discovered that four windows were broken.

“Now, these windows, the glass is about quarter of an inch thick. You will have to have tremendous force to break those windows. The stones were thrown with such force that they flew right across the room and struck another wall on the other side of the room.”

James advanced this theory about how the damage might have been done:

“You know we have kids who do things. I don’t think it’s any small kids that did that because if you fall and hit your head on that glass, it can hurt you.  It has to be some adult and I think it was two persons who did it.”

James said he reported the incident to the police who went to the hall and took some photos but he has to go back to give them a statement.

The general secretary was unable to give the value of the damage, telling iWitness News that a building contractor is evaluating the damage.

“Those glass [panes] are special glass. So it’s not very easy to get them here. So we will have to check and see what is the cost to replace them first.”

The damage occurred on the side of the building that borders the Venezuelan embassy.

James said this was especially disconcerting.

“This is what is worrying me because that should have made a lot of noise and I think they should have security there (at the embassy), but probably not.”

He said the NDP doesn’t have security stationed at the building but is now looking into improving it.

He was speaking about the April 2016 incident in which there was an apparent attempt to set the building afire.

“I’ll tell you, when I came in as secretary general, I saw a window which I am positive it is a gunshot that came through that window: the way the glass and the striation — it is too small to be a stone and it had to come in with significant velocity not to shatter the whole window,” said James, a retired commander of the Coast Guard who became general secretary of the NDP one year ago.

“Because I have the experience, I recognise that it had to be a gunshot that came through that window.

“So we are looking at putting in some electronic security around the building.”

James encouraged persons who might have information about the crime to give it to the police.

“I will urge Vincentians, we have a spate of crimes that are going on right now and we have to be each other’s keeper. First of all, if persons out there witness these things, I would encourage them to talk to the police. If they don’t want to talk to the police, they can always talk to me. I am available to talk to them,” he said.

“We have to ensure that St. Vincent has the necessary environment… People may think it is an isolated incident because they throw a stone at the NDP headquarters, might be a joke for some of them, but this indicates the breakdown we have in our society. Because you have to leave the street, you have to look for the stones, and you have to come to the back there and you have to climb over that wall to throw the stones,” James told iWitness News.