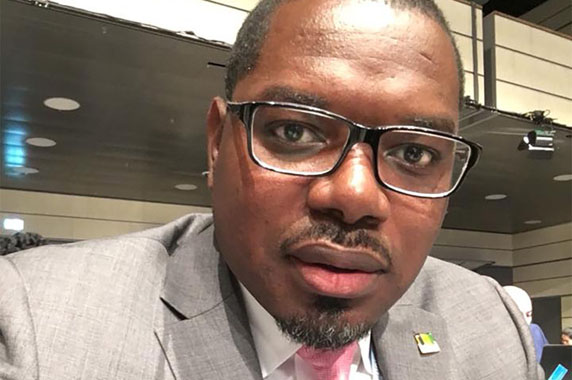 The main opposition New Democratic Party (NDP) in St. Vincent and the Grenadines (SVG) on Saturday called for the removal of one of the country’s diplomats at the United Nations over reports that he physically assaulted his wife.

The Ralph Gonsalves’ Unity Labour Party remains mum almost two days after media reports out of New York indicated that Sehon Marshall, 43, a counsellor at SVG’s Permanent Mission to the United Nations, left his wife, Xandra Marshall, 36, also a Vincentian diplomat, with a bloody lip after he allegedly struck her at their Brooklyn home.

The NDP said it is “deeply concerned about allegations of domestic abuse and violence against women” contained in the New York Post article.

The North American publication said that New York Police Department Officer could not arrest Mr. Marshall because of his diplomatic immunity.

His wife, who was earlier this month appointed SVG’s Deputy Consul General’s at Kingstown’s consulate in New York, refused medical treatment, according to the report.

The NDP said: “The reported allegations are extremely serious allegations of violence and domestic abuse and they cannot be treated lightly. We in the NDP categorically condemn any and all forms of violence against women and we especially reiterate this condemnation today, on this International Day to Eliminate Violence Against Women, November 25th.

“Furthermore, we insist that those selected to represent our nation and our people overseas, must be held to the highest standards of behaviour and accountability for their behaviour.

“They must be prepared to be held accountable for any actions or alleged actions which bring disrepute to the country, the people and the government of St. Vincent and the Grenadines. We insist that our country and people cannot — and must not — be represented by those who do not adhere to the highest standards of behaviour AND accountability for their behaviour.”

The NDP said that the nation must “never turn a blind eye to such allegations of unacceptable and possibly criminal conduct of public officials.

“We therefore call for Mr. Marshall to be relieved of his diplomatic position and recalled to St. Vincent and the Grenadines, with immediate effect.

“We, in the New Democratic Party, stand by the principles that we have detailed in our own charter and policy regarding gender and violence against women and children, and we look forward to the immediate recall of Mr Marshall and an appropriate resolution of this matter, in the interest of the good name of the country and people of St. Vincent and the Grenadines.”

In August, the NDP accepted the decision of Colin Graham, 39, to withdraw himself from further consideration as the party’s candidate for East St. George after it became public that he had physically abused his girlfriend, Iyah Jacobs.

Graham admitted to the abuse on Hot97 FM, where he worked at the time, after Jacobs made a post on Facebook.

He later said that he and his girlfriend — who had said separately on radio that they both need help — would seek professional assistance.

In October 2016, Igal Adams, then host of the NDP’s daytime radio programme, New Times, on NICE Radio, stepped down amidst a sex scandal.

Adams, then 63, left the programme after being arrested one week after the mother of a 14-year-old girl told police that he had had sex with the child at least twice since 2013 — when the girl was 11 years old.

Police kept Adams in custody for one day, during which they interviewed him, then released him without charge, pending the outcome of further investigation.

The scandal in New York this week is the second involving a Vincentian diplomat in that city since 2014.

Mr. Marshall was initially appointed Deputy Consul General to New York in November 2014, replacing Edson Augustus, whom the government recalled a few months earlier after learning that the diplomat had taken monies from persons in the United States and promised to help them to obtain U.S. permanent resident cards.

But Mr. Marshall himself is no stranger to controversy.

He was forced to apologise in September 2014 — while being considered for his first diplomatic post — for saying on radio that that before the ULP came to office (in March 2001), civil servants used to quit their jobs and migrate to the United States and become nannies and dog walkers.

The statement outraged Vincentians in New York, many of whom, through remittances, contribute significantly to the Vincentian economy.

A spokesperson for the ULP administration told iWitness News Friday evening that the government had seen Friday’s media report and would investigate the matter before commenting.