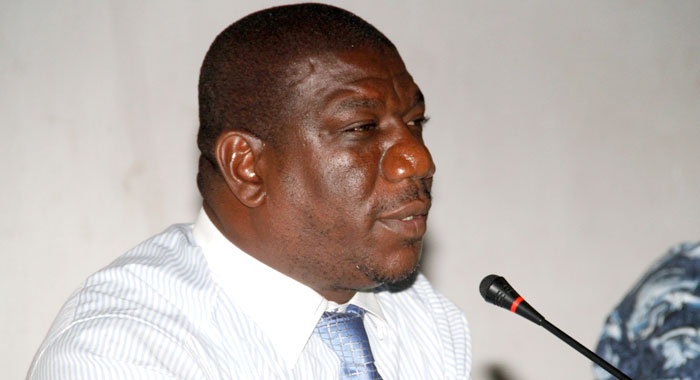 Leacock said the NDP’s candidate for South Central Windward, Israel Bruce, should have been appointed a senator. (iWN photo)

The main opposition New Democratic Party (NDP) continued its consultations with various sectors of the Vincentian economy with an agriculture forum in Greiggs on Thursday.

Israel Bruce, the NDP’s candidate for South Central Windward, where Greiggs is located, said that the party decided to hold the forum because it doesn’t operate like  “gravediggers”.

“We will not stay at the top and dig down and dictate to the farmers of this country what must be done. Instead, the New Democratic Party subscribes to the notion that we must engage in a consultative process where we meet our farmers wherever they are, hear their concerns, and having done so, build competent, capable and profound agriculture developmental platforms to take agriculture, as a sub-sector, forward,” Bruce told the gathering.

He said that the NDP had come to the constituency to hear from farmers, traders, and people interested in cottage industries.

Bruce, a lawyer and first-time candidate, told the audience that the NDP wants to hear about the issues affecting farmers and farmers’ suggestions about how these issues can be addressed, as well as respond to farmers’ questions about the sector.

He said that the agriculture industry has been significantly challenged under the Unity Labour Party (ULP) administration of Ralph Gonsalves.

“I need not remind you that I have looked around, particularly in this constituency, and I see farmers who, when I was a little boy, were living lavish lives, were living on their farms, I am embarrassed, I am ashamed to see them now taking a wooden baton, heading to Kingstown to serve as security officer for establishments in Kingstown, thanks to the Unity Labour Party.”

The situation obtains although the ULP had promised to bring back the glory days of banana, Bruce said.

“And they shuttled a member of a political organisation in Britain as part of the conviction scheme to say to you that if they were elected, bananas would come back to the glory days.

“You, the farmers in this constituency, you know that you are not faring well. You are not finding markets for your produce. You have the worst roads in the entire St. Vincent and the Grenadines in South Central Windward towards the farmlands. You know it. Tonight is your night, to say, once and for all, what needs to be done.”

He said that once constituents make demands, things happen. He said the NDP did a video production on the state of roads in the district and the roads were then repaired.

“We provided assistance for school children to go back to school, and people followed suit. Every time we set the trend, they follow.”

He said that most recently, he had to demand publicly that residents of Mt Grennan deserved better.

“And we penned a letter asking for the installation of lighting facilities in Mt. Grennan and lights have come. What does that say to you? If we are doing that in opposition, you wait until we get into government,” Bruce said.

The agriculture forum follows in the consultative mode on the NDP’s National Youth Dialogue in Kingstown earlier this month.