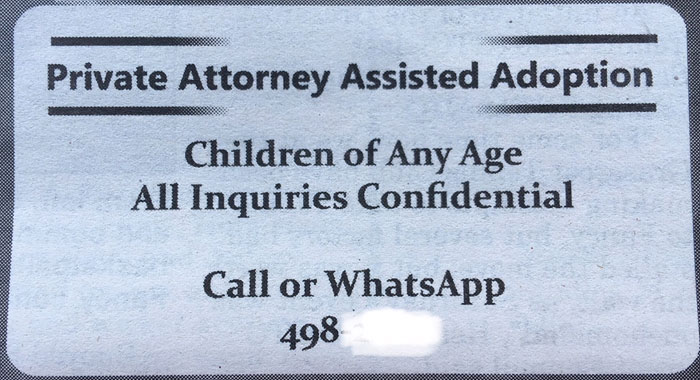 The family affairs ministry in St. Vincent and the Grenadines on Sunday condemned a newspaper advert about a  “private attorney assisted adoption” of “children of any age”, saying that such an advertisement is illegal under the Child (Care and Adoption) Act 2010.

The advertisement, published in The Vincentian newspaper on Friday, said all inquiries are confidential, and included a local number that persons could call or WhatsApp.

“The Ministry strongly condemns such a move and shall state that in accordance to the Child (Care and Adoption) Act 2010 Part XII Section 92 subsection 1, ‘A child may be placed for adoption in Saint Vincent and the Grenadines only by the Adoption Committee’.

“In addition, Section 91 Subsection 1 clearly describes the functions of the committee, which include but are not limited to ‘determining the manner in which a child is selected for adoption; to receive applications; to assess the suitability of a person to adopt a child’,” the statement said.

The ministry further noted that the Child (Care and Adoption) Act 2010 Part XVI states in Section 132, subsection 1,  “A person shall not: (a) place or arrange the placement of a child for the purposes of adoption; or (b) receive a child in his or her home for the purpose of adoption unless the child has been placed by the Adoption Committee pursuant of this Act.”

The ministry also pointed out that the act says, “A person shall not publish or cause to be published in any form or by any means an advertisement dealing with the placement of a child for adoption.”

The ministry said that under the act, both offences are liable on summary conviction to a fine not exceeding EC$10,000 or to a term of imprisonment not exceeding six months.

“The public is therefore asked to be vigilant and to report to the police anyone in such activity,” the ministry said.

iWitness News’s calls to the number quoted in the advertisement went directly to voicemail.