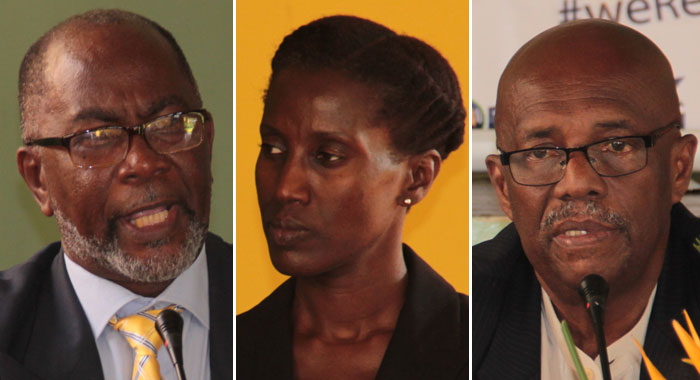 A vice-president of the main opposition New Democratic Party (NDP) has declined comment amidst a public rebuke by another senior member over comments about the continued appointment of opposition senator Sherlan “Zita” Barnwell.

Leacock, who is Member of Parliament for Central Kingstown, told iWitness News, that he would, therefore, not make any comments in response to Eustace.

The spat has emerged as the NDP has replaced Senator Julian “Jules” Ferdinand with lawyer Kay Bacchus-Baptiste, who has replaced Ferdinand as the party’s candidate in West St. George,

Leacock said on radio last week that he wholeheartedly supports Bacchus-Baptiste’s appointment but believes that Marcia “Zita” Barnwell, should have been replaced in the senate by Israel Bruce, the NDP’s candidate for South Central Windward in the next general elections.

Both Barnwell and Ferdinand were appointed by then Opposition Leader Arnhim Eustace, after the December 2015 general elections.

Speaking during his weekly appearance on the NDP’s “New Times” on NICE Radio on Monday, Eustace said he had come to the programme “very, very troubled indeed”.

He said he wanted to make a statement before commenting or taking calls from the public.

“The making of public comments that emanated from outside of the party executive, outside the NDP parliamentary caucus and the other New Democratic Party organs is the right of those who express them.

“Those comments, however, that are made from within the party by senior members are most inappropriate.”

Eustace said he wished to remind Leacock that he — as a vice-president of the NDP and a member of its parliamentary caucus — is aware that opposition senators serve purely at the pleasure of the Leader of the Opposition.

Eustace, who demitted office as NDP president and opposition leader last year, had also appointed Leacock a senator before he won the Central Kingstown seat in 2010 on his second attempt.

“This undisciplined approach is contributing to a breakdown in the united approach that distinguishes the NDP from other parties. In the circumstances — the present circumstances — I will not be taking today any calls on this programme that relate to that matter.”

Eustace noted that his weekly appearance on Monday’s programme was preceded by the playing of a recording of party leader Godwin Friday, who is also Leader of the Opposition, addressing the Jamaica Labour Party’s convention in Kingston on the weekend.

“While we at home are questioning his decision,” Eustace said.

Speaking on the New Times programme last Wednesday, Leacock said he was not speaking about any particular party, but noted that the Constitution gives the leader of the opposition the right to appoint senators.

Using the example of recent developments in Zimbabwe, Leacock said that while the national constitution gave former president Robert Mugabe certain rights, he was brought to his knees by his party’s internal constitution.

Leacock said he finds that sometimes, some persons in the NDP have to work too hard to be recognised and to be rewarded.

“That’s my experience. I have had that personal experience,” Leacock said.

He said that one of the immediate challenges that Bacchus-Baptiste has in West St. George, now that she has become a senator, “is to convince — and I believe that she will be able to do so — I am here to stay.

“I am not even getting to the point to fix your roads, to give you cement, to give you galvanise, to give you education, to upgrade you and give you a hand up. All that is important but people have simple requirements.

“The first, [they] want to have a relationship with their representative and that first relationship is I am here to stay,” Leacock said, adding that West St. George has defeated the best and brightest of the NDP.

He mentioned among them Carl Joseph, a former magistrate who had a master’s degree, Linton Lewis, who has a doctorate and is a “son of the soil, probably more qualified than any other Vincentian”, Kingsley Layne, former dean of the diplomatic corps, “more papers and qualification than you could have, bright like the sun”, Vynnette Frederick — “high quality, sociability, versatility”, and Ferdinand with the “highest academic qualification.

“Look at the paper trail of the people who defeated them. How do you compare Ces McKie — some people say ‘Ces is a mess’ — I don’t like using that but I’ll use it here.”

Leacock said he knows that the people of South Central Windward already have that affinity to Israel Bruce, a lawyer and longstanding member of the NDP who has been selected to represent the party in that district in the next elections, as a first-time candidate.

Leacock said Bruce “has a history and a track record of commitment, of youth fellowship, football, cricket, whatever moves in his consistency, he has been a part of that”.

He said Bruce had gone to become qualified as a lawyer at a time when “his very party rejected him, because it must be said he could have been further along the curve had we embraced him”.

“We need more professional persons in their 30s and 40s to be coming forward to blend with us who are in our wisdom years and who could lend their experience to building the party.”

The NDP can, in a more robust way attack a lot of the problems it is dealing with, adding that often there is a concentration on promoting an individual rather than the party, Leacock said.

“There can only be one leader of a party at a time. The party has chosen that person. It is not me, but I have an abundance of confidence in myself and what I can bring to St. Vincent and the Grenadines and bring the New Democratic Party. And I pray God that that opportunity is provided,” said Leacock, who backed out of the leadership contest against Friday last year just before it was put to a vote at the party’s convention.

One reply on “NDP heavyweights in public spat over senatorial post”