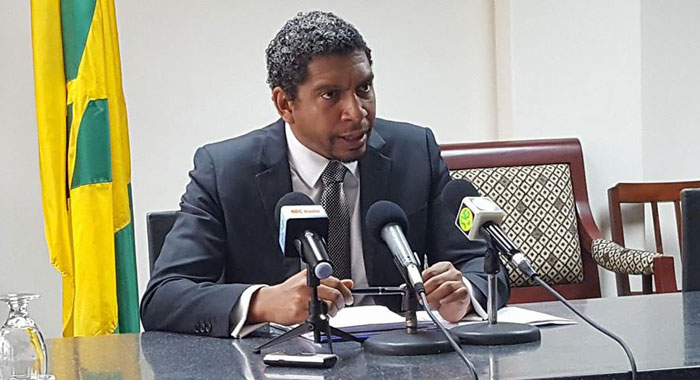 Minister of Finance Camillo Gonsalves was very upbeat and optimistic at a press conference on Tuesday after an official visit to Qatar, his first since taking up the finance portfolio this month.

Gonsalves said that one of the main issues he discussed with the Qatari officials was hotel development in SVG.

Gonsalves said his delegation, which included SVG’s Ambassador to the United Nations, Rhonda King, explained to the respective Qatari ministers that 2018 will be the first full year after the opening of Argyle International Airport — which began operating on Feb. 14.

He said he told them that while his government has completed the herculean task of building the airport, there are other tasks ahead, including increasing the room stock and building more quality hotel rooms which will attract airlines and other hotels to be built in a positive cycle.

He said he explained to Katara Hospitality that the mandate of the government, is to build its own 250-room hotel while trying to attract foreign investors to build a hotel.

Gonsalves said Katara Hospitality was very clear that their vision for their first Caribbean facility is a good bit larger than 250 rooms.

They, however, would be interested in SVG “because we are, essentially, in their eyes, virgin territory — the best locations have not been taken by other hotels and that they can brand and market St. Vincent and the Grenadines in a particular way.”

He said that because both Katara Hospitality and Qatar Airlines are state-owned, they have a number of synergies between the airlines creating airlift to their hotels around the world.

“So we had some very fruitful, some very positive discussions, but the ball is now in our court as they have requested some information from us about projected arrivals, about our wages, about our laws, about some of the locations that I discussed with them for potential hotel development.”

Gonsalves said that the government has tasked the relevant agencies and offices to provide that information.

He said Qatar hospitality will be coming to SVG early in the new year to further develop those conversations about hotel development.

During the trip, Gonsalves’ delegation also discussed with Qatari officials issues related to the development of a new city at Arnos Vale.

The Unity Labour Party has proposed to build a new city at the site of the decommissioned E.T. Joshua Airport.

Gonsalves said he explained to his counterparts the government’s plans to construct a new hospital on the site and that there have been discussions with Movie Towne and a commitment to build a facility there.

He, however, said that the prime minister of Qatar and the representatives of the Qatar Investment Authority and the Qatar Development Fund, indicated very strong interest in developing an overall plan for the city at Arnos Vale that would include hotel, residential, essentially condominium, retail space and public facilities like a hospital.

“And they want to come and visit to see the site and to hear from us what our vision is of the city and how we can phase the construction over the next few years to develop the new city at Arnos Vale. I think those conversations were very, very positive,” Gonsalves said.

He further told the media that the agencies are also partners with OPEC Fund for International Development, which visited SVG recently and signed an aide-memoire discussing the new city.

He said Qatar is aware of those discussions and feel that there are some important synergies there.

Gonsalves said that the Qatar Development Fund is interested in building the roads, the infrastructure, drainage and a tunnel under Cane Garden Point.
The Qatar Investment Authority is interested in getting involved “because there would be condominiums and hotels and revenue generating aspects of this thing.”

Qatar Investment Authority indicated that their interest in SVG is due in no small part to the friendship between Prime Minister Gonsalves and the current and previous emir, Gonsalves said.

He said the Qataris know the project might not spin a profit for them quickly, but they are willing to invest because of their friendship with Gonsalves.

He said there were discussions with the Ministry of Education and the Qatar Foundation on the issue of scholarships.

As a gesture of friendship, they will be willing to grant one or two scholarships to Vincentians who already qualify for matriculation.

“We don’t have the final modalities worked out yet as to precisely how many and when it would begin but we have an agreement on that issue,” Gonsalves said.