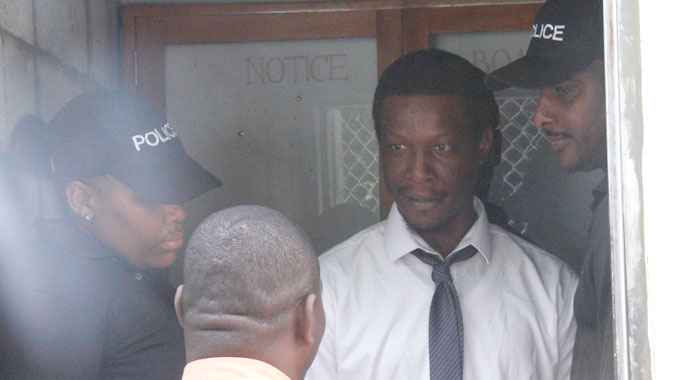 The three men accused of the shooting murder of two brothers earlier this year will return to court in December for the commencement of a preliminary inquiry.

Former police officer, Richard Francis, 32, a van driver from Layou, along with Kendene Douglas, 31, and Schemel Dunbar, 29, both of Rillan Hill, have each been charged with the May 4, 2017 murder of Police Constable Danroy Cozier, 26, of Mesopotamia, and his younger brother, Nicholas Cozier, 19, of Richmond Hill.

The preliminary inquiry was scheduled to begin on Monday before Chief Magistrate Rechanne Browne-Matthias.

However, when the matter was called, Francis’ lawyer, Ronald “Ronny” Marks, told the court that he would like to proceed by way of a paper committal, saying that such a process would be more efficient.

Grant Connell, who is representing Douglas, also agreed with his colleagues.

The matter was then adjourned to Dec. 11.

This means that instead of witnesses coming to give evidence verbally, the court would examine the written statements they gave to police and decide if there is enough evidence to commit the men to stand trial.

The brothers were found shot dead on May 4 under some trees on the beach at Sion Hill Bay.

They are said to have been shot and killed and their bodies dumped there sometime earlier that day.

A modest crowd of persons, including relatives of the deceased and the accused attended court on Monday, with a number of them gathering outside as the men were escorted from the courthouse.

Pollin died after being shot during an attack at his home.

His assailant(s) pursued the man, who had already been shot and killed him in the street where he had collapsed.

Dunbar has already beaten two murder charges, the first of which was the May 1, 2015 murder of Aljay Chadrick Douglas, 23, of Campden Park.

Reports are that the case was withdrawn for a lack of evidence after the main witness “disappeared”.

On June 7, 2016, Dunbar was charged with the murder of Campden Park resident James Shepherd, 41, who was shot and killed on May 31, 2016 in Twenty Hill, a community between Rillan Hill and Penniston.

On Jan. 7, 2017, Dunbar was discharged at the commencement of a preliminary inquiry into Shepherd’s death.