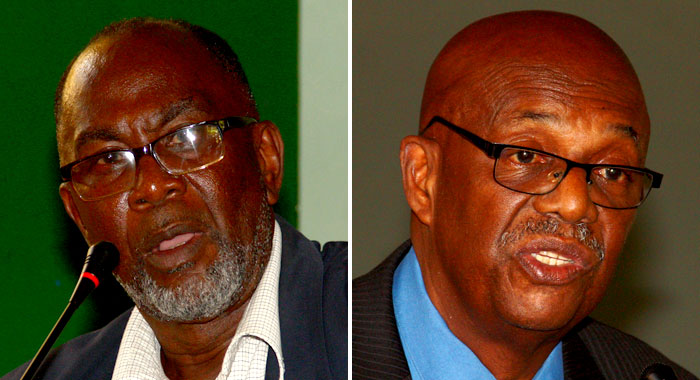 Leacock had said that he thinks that his party should have replaced Sen. Sherlan “Zita” Barnwell, when it appointed Kay Bacchus-Baptiste to replace Julian “Jules” Ferdinand recently.

In his weekly appearance on the NDP’s “New Times” on NICE Radio last week Monday, Eustace, a former opposition leader, said Leacock’s public comments give the impression that the party is not united.

Leacock declined to respond to Eustace when he made his weekly appearance on the programme two days later, but commented on Boom FM on Monday.

“I felt very badly about it. But I muscled the strength not to reciprocate and I left it there but I felt very badly because he did exactly what he was telling me not to do,” Leacock said on radio on Monday in a long-winded rant.

Leacock said he wanted the record to show that he has been “consistent at every forum of the New Democratic Party in trying to speak to them to improve the party’s chances.

“I do so at executive meetings, I do so at central committee meetings and sometimes I just keep my peace and keep my silence,” he said in the call in which he responded to a statement by social commentator Keith Joseph on Saturday, that Leacock was a weak link in the NDP.

Leacock, who is also Member of Parliament for Central Kingstown, has had a strained relationship with his party for the past year.

The tension began when his parliamentary colleagues selected Member of Parliament for the Northern Grenadines, Godwin Friday, as Opposition Leader and the party later selected Friday as party leader by acclamation after Leacock dropped out of the race at the last moment.

He said that in August, from the United States, he saw what was happening in the NDP and sent home by WhatsApp, “a strong message and I spoke to the president about it too” requesting an urgent meeting “to put the party in good stead”.

“It is December, that meeting and that audience has not been provided to me up to now,” Leacock said.

He said that if the NDP wants to win, it has to fire on all 15 pistons – an apparent reference to the 15 constituencies.

“But anybody who believes that I am easy pickings and they would come and just wash their mouth on me but I’ll turn away and turn the other cheek, just to be in their good books, they have another thought coming. I am who I am. This is me. You don’t like me, you ask me to leave your party and I’d leave with my bat under my arm and make room for others,” Leacock said.

Leacock won the Central Kingstown seat for the first time in 2010, on his second attempt, after two terms as a senator.

Leacock said he was at a funeral last week and someone told him that any NDP candidate can now win the in Central Kingstown, based on his work in the district over the years.

“I simply wish the New Democratic Party the best, I hope they apply wisdom and understanding and that I feel a sense of appreciation. If I begin to detail things, then ‘He is all about ego.’ ‘Always he and he.’ But I’ve made my mark and I’m available to continue to make my mark, especially to the New Democratic Party,” he said.