Leacock says he can’t win as an independent candidate 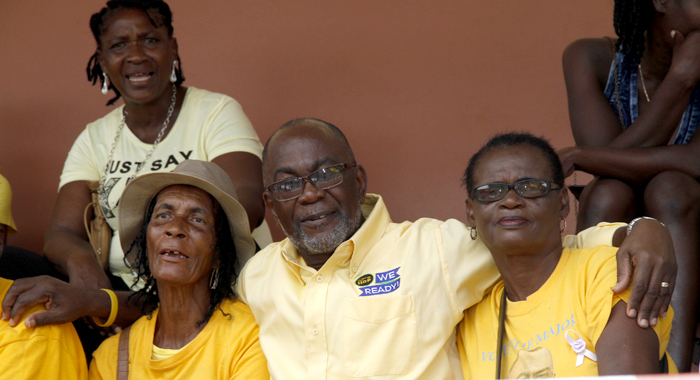 Leacock sits with constituents at the NDP convention in February. (iWN photo)

Vice-President of the New Democratic Party, St. Clair Leacock, who has been in a protracted and public battle with his party since he failed to become its leader last year, says that he cannot win as an independent candidate.

Speaking on Boom FM on Monday, Leacock said that he would never turn his back on the people of Central Kingstown, whom he has been presenting in Parliament since 2010.

Leacock wrested Central Kingstown from the ruling Unity Labour Party (ULP) in 2010, on his second attempt, after 10 years as a senator.

“If I run independent in Central Kingstown, I’d just enhance the chance of the ULP to form government and I would not win that seat,” Leacock said on radio in a call to the programme.

“There are very few people in St. Vincent who could win a political seat as an independent,” said Leacock who has repeatedly emphasised the fact that the he is the only NDP candidate who was returned to office in 2015 with a greater margin than in the 2010 elections.

He said that he thinks that only former Prime Minister and NDP founder Sir James Mitchell, and Prime Minister Ralph Gonsalves can currently win a seat as an independent candidate.

“And I would not do that,” Leacock said, adding that “time will tell” what he would do if the NDP no longer wants him as a member.

Leacock was speaking as part of his response to social commentator Keith Joseph, who in his weekly commentary, “Just Another Look”, on the pro-NDP NICE Radio on Saturday, said that Leacock is the weakest link in the NDP.

Joseph was, at the time, criticising Leacock for his public comments about Opposition Leader and NDP President Godwin Friday’s decision regarding the appointment of senators.

The NDP recently announced the appointment of lawyer Kay Bacchus-Baptiste, the party’s candidate for West St. George, to replace outgoing candidate, Julian “Jules” Ferdinand, who, as a first-time candidate, failed to win the seat in 2015.

Leacock said he supports the appointment of Bacchus-Baptiste but said that Israel Bruce should also have replaced Sen. Sherlan “Zita” Barnwell.

Leacock was returned to the post, which he has held since 2001, by taking 197 votes, while Matthews was elected for the first time with 198 votes, while Barnwell garnered 144.

Bruce, who like Barnwell is also a lawyer, was selected as the NDP candidate for South Central Windward late last year.

Member of Parliament for East Kingstown, Arnhim Eustace, who stepped down as NDP president last year, used his weekly appearance on the NDP’s “New Times” last week Monday to chastise Leacock for his public comments about the senatorial appointment, saying that the comments give the impression that the party was not united.

In his weekly radio appearance on NICE Radio last Wednesday, Leacock acknowledged Eustace’s comments but declined to respond to them.

But Leacock said on Boom FM on Monday that Joseph was spurred on in making his comments on “Just Another Look”.

“Keith Joseph doesn’t speak without approval or prompting from others and so he was doing the bidding for others,” Leacock said of Joseph, whom he described as a good friend.

Leacock, however, noted that it is not the first time that Joseph has used his programme to criticise him.

“I’ve heard him do evaluations on other radio programmes. He has ranked people like Terrance Ollivierre ahead of me, in terms of their workload for the New Democratic Party,” Leacock said of Ollivierre, who has been representing the Southern Grenadines since 2001.

“I’ve heard him with all kinds of aspersions. I’ve heard other executive members with their aspersions on the radio programmes, as if, as [Poorsah] say, ‘Me mouth dey in me mumma’ (I left my mouth in my mother.). I’m not like that. I’ve have given everything I can to the New Democratic Party and I still have great wisdom, experience, skill that I can contribute to their party. I am at their disposal, it is for the party to make that determination that they have greater use for me.”

Leacock said that he has a sense that the rank and file of the party have a need for him.

“Again, none of us are indispensible, none of us have title deed for the party or to political office and none of us should, ever, ever, ever be so consumed with being called ‘Mr. Minister’, ‘Mr. MP’, ‘Senator’, or anything political, you know. All that is new becomes as old; we are like vapour. In a moment, in the twinkling of an eye, we are all gone. Nothing is forever.”

Leacock said Joseph was correct when he said no one is indispensible.

“I am sure that the party can hold Central Kingstown without me, especially if it has my support or endorsement,” Leacock said.

He said he is preparing for his departure from politics, adding that the can probably run for one more election or two.

“But I would be the last person to say that the NDP cannot win the seat without me. I would not say that at all.”

Leacock was asked about his comment last week Wednesday about persons parachuting into the NDP.

He said while he was not speaking about Eustace — who joined the NDP in 1998 and became its leader three years later — some persons have interpreted his comments as such.

“I don’t want to be in any public brawl with Mr. Eustace, you know… I’ve always had respect, I haven’t lost respect for him. I disagree with him, he had given me cause to question whether he has a deep sense of appreciation for me,” he said.