‘Leacock is an NDP man’ — Cummings 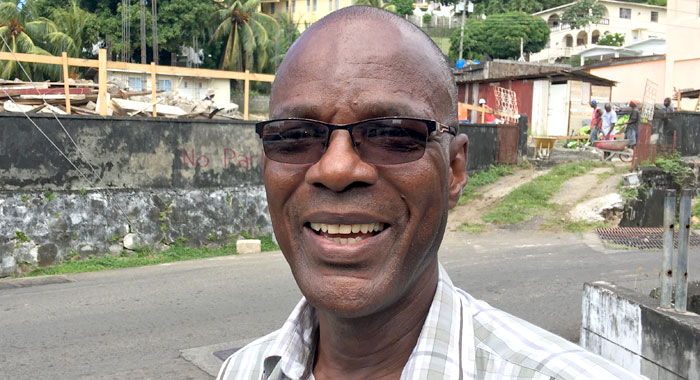 Chair of the main opposition New Democratic Party (NDP), Daniel Cummings, does not think he has to do anything in particular to dissuade embattled vice-president, St. Clair Leacock, from leaving the party.

Cummings, who is also Member of Parliament (MP) for West Kingstown, was asked to comment about recent developments in which Leacock has spoken publicly about goings-on in the party.

Among other things, Leacock, who is also MP for Central Kingstown, said he was not consulted when Opposition Leader and NDP President, Godwin Friday, decided to appoint Kay Bacchus-Baptiste as a senator last month.

Bacchus-Baptiste, a lawyer, will represent the NDP in West St. George in the next election.

Leacock has said on radio that he supports Bacchus-Baptiste’s appointment but that Sherlan “Zita” Barnwell should also have been removed from the senate and be replaced by Israel Bruce, the NDP’s candidate for South Central Windward.

Eustace said that Leacock’s should know that senatorial appointments are the purview of the Leader of the Opposition and that the comment gave the impression that the NDP was not united.

Cummings seems to have thought that Eustace’s comments on the matter were enough, telling iWitness News, “There are some matters not worth commenting on.

However, Leacock had said that while this is the case, he thinks that there should be consultation. He had also said that he had voiced to Friday his opinion that Bruce should have been appointed at the same time as Bacchus-Baptiste.

“Leacock, like everybody else, has a right to his opinion. As to whether that is for public consumption, that’s his judgement,” Cummings told iWitness News.

He said he is “one hundred per cent” convinced that the NDP is united.

“In one cause, and around one leader and in the interest of the people,” Cummings said.

He told iWitness News that this is the case, notwithstanding Leacock’s comments.

“A party that allows for different views is a party that can grow. It is interesting hearing some of the comments from the other side that they are in this particular mould that says, ‘You dare not oppose this man in public’, ‘You dare not say certain things’, no matter how bad the deed, whether it is rape, condoning whatever, you can’t come out and criticise a leader. Damn, that’s not what leadership is about, that’s not what governance is about.”

In his most recent comments — on Boom FM on Monday — Leacock said that the NDP is having a meeting of its central executive on Tuesday, and that they can throw him out of the party if they wish.

But Cummings said the meeting was scheduled before the recent developments.

“In fact, it was postponed because the leader had to go to Jamaica,” he said, referring to a trip that Friday made to Kingston in late November.

Cummings said the issues regarding Leacock might or might not be discussed, but said they were not part of the agenda.

“We have very important matters to discuss. It may not come up,” Cummings told iWitness News.

He said that among the items on the agenda are the continued determination of candidates and the party’s convention in the New Year.

“There is a lot of important work to do. And, of course, the petition,” Cummings said, referring to the two petitions the NDP has filed challenging the result of the 2015 general elections.

Cummings told iWitness News that the NDP is “ready to take over the governance of this country.

“We are waiting for the case (petitions) to come up next week Tuesday and Wednesday. We have an illegitimate regime that’s been occupying the seat of governing for some time and ruining this country. And our focus is on winning that petition and getting the government that the people justly deserve…

“It is interesting that they would say our party has infighting when I know that the infighting is within the ULP, particularly as it relates to the succession plan. Our party has had a very democratic process of selecting a leader, we have a competent leader and everybody is united around him.”

After the leadership transition, the relationship between Leacock and Cummings, who had previously referred to each other as “friend and brother”, went through a rocky patch.

But Cummings told iWitness News that that was not on his side.

“And I heard him say that he was concerned. That’s understandable but my relationship with Major has never changed and it is not going to change. I am not a person given to cynicism. I look at the big picture; I look at the good. This mission is not about myself or Leacock or Dr. Friday. It’s about the people of this country, man,” Cummings said, referring to Leacock by the rank he retains from his days in the Cadet Force.

“That’s the focus and it is a serious challenge, serious job,” Cummings told iWitness News.