SVG against US move to recognise Jerusalem as Israel’s capital 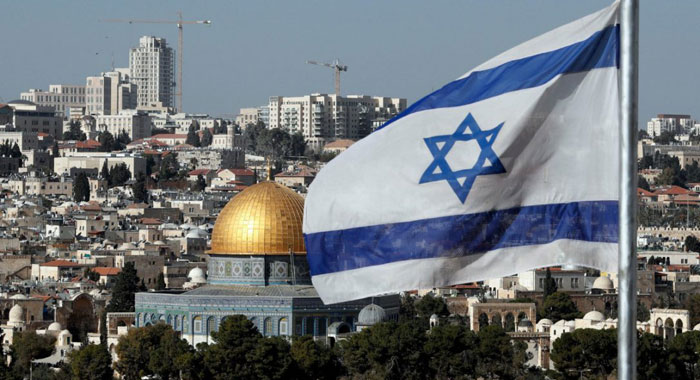 The Israeli flag flutters in front of the Dome of the Rock mosque and the city of Jerusalem. (THOMAS COEX / AFP/GETTY IMAGES)

The Government of St. Vincent and the Grenadines (SVG) on Tuesday urged the United States “to refrain from recognising Jerusalem as the capital of the State of Israel”.

“Any such recognition would imperil the internationally-agreed Two-State Solution, destabilise the Middle East region, and invalidate the important role of the United States as an honest broker and driver of the Israeli-Palestinian peace process,” the Ministry of Foreign Affairs said in a statement.

The warning comes as the Donald Trump administration is poised to make a key decision this week on whether to recognise the ancient city as the capital of Israel,

The capital of Israel is Tel Aviv, while Jerusalem is a corpus separatum, or a “separated body” with a special legal and political status.

The international community has widely condemned the pledged by Trump to move the US embassy from Tel Aviv to Jerusalem.

Washington said this week that may be prepared to postpone that decision or six months.

However, U.S. officials say that the Trump administration might announce recognition of Jerusalem as the Israeli capital.

The Ralph Gonsalves administration in Kingstown noted that in 1980, in response to an Israeli attempt to declare Jerusalem to be the capital of Israel, the United Nations Security Council condemned that declaration as a violation of international law.

The Security Council went on to state that “all legislative and administrative measures and actions taken by Israel, the occupying Power, which have altered or purport to alter the character and status of the Holy City of Jerusalem . . . are null and void and must be rescinded forthwith,” and that such actions “constitute … a serious obstruction to achieving a comprehensive, just and lasting peace in the Middle East,” Kingstown noted it in statement.

It further said that for the past 15 years, the United Nations Security Council has “Affirm[ed] a vision of a region where two States, Israel and Palestine, live side by side within secure and recognized borders.”

The international community, in consistently reaffirming the two-state solution, has emphasised that the status of Jerusalem is a “final status” issue to be negotiated by the parties, the government noted.

It said that this position has been reaffirmed in various agreements, including the Camp David Accords, the Oslo Accords, and the Roadmap for Peace proposed by the Quartet on the Middle East, all of which included the United States as a key interlocutor.

In 2011, the United Nations General Assembly “Reaffirm[ed] the illegality of Israeli actions aimed at changing the status of Jerusalem . . . and all other unilateral measures aimed at altering the character, status and demographic composition of the city. . .”

The United Nations Security Council stated unequivocally in 2016 “that it will not recognise any changes to the 4 June 1967 lines, including with regard to Jerusalem, other than those agreed by the parties through negotiations.”

Even more recently, the United Nations Resolution of Nov. 22, 2017 stated that the General Assembly “Reiterates its   determination that any actions taken by Israel, the occupying Power, to impose its laws, jurisdiction and administration on the Holy City of Jerusalem are illegal and therefore null and void and have no validity whatsoever, and calls upon Israel to immediately cease all such illegal and unilateral measures.”

“St. Vincent and the Grenadines is therefore deeply concerned about any attempts to deviate from the settled parameters governing the delicate quest for peace between the State of Israel and the State of Palestine,” the statement said.

“There can be no more destabilising and potentially incendiary deviation than unilateral declarations concerning the status of Jerusalem. The role of the United States as a valued facilitator and interlocutor would be irreparably compromised by any attempt to pre-empt the negotiating process by making unilateral pronouncements on final status issues.”

The statement said that while SVG applauds recent efforts by the United States “to reinvigorate the Israeli-Palestinian peace process, we urge that such efforts focus on cessation of illegal Israeli settlement activity in Palestinian territory, the removal of impediments to movement and commerce within the State of Palestine, and the fostering of an environment of trust and goodwill that can stimulate meaningful negotiations between the parties.

“The decades of painstaking work, to say nothing of the lives lost in the conflict, demand mature, responsible and measured action. Accordingly, Saint Vincent and the Grenadines strongly urges the United States of America to acknowledge that any unilateral declaration on its part regarding the status of Jerusalem will not in any way advance the cause of a just, peaceful and lasting solution to the dispute between the peoples of Israel and Palestine,” the statement said.