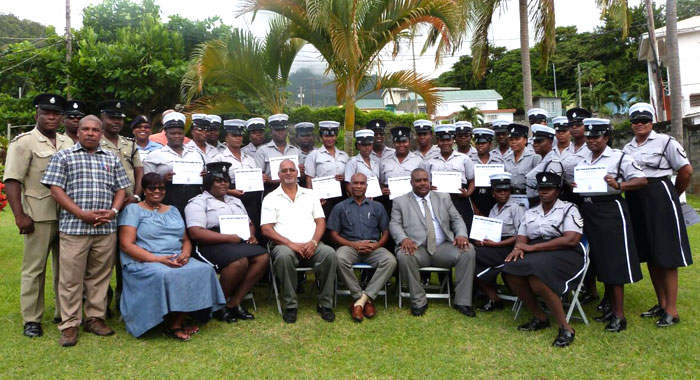 The Royal St. Vincent and the Grenadines Police Force (RSVGPF), in an effort to tackle incidences of sexual offences in the country, have trained 27 female officers of various ranks about understanding sexual offences.

The commencement ceremony for the two-week course took place last Friday at the Police Training School, under the theme “Empowering Policewomen in the Workplace”.

The ceremony showcased the commitment of the RSVPF in ensuring that female police officers are equipped with the requisite skills needed to perform efficiently in their various departments and stations.

The course sensitised each participant to the sensitive nature of sexual offences. It also focused on topics that were intended to produce an acute awareness of the officers’ ability to investigate these crimes as well as to ensure the emotional wellbeing of the victim.

Assistant Commissioner of Police (ACP), Frankie Joseph, while delivering his keynote address, emphasized the importance of the training and urged the graduates to always be opened minded when dealing with victims of sexual offences. He lamented that the officers should not be judgmental by blaming the victim but must rather entertain the report, investigate the matter thoroughly and gather the relevant evidence to successfully prosecute the offender(s).

The assistant commissioner also stressed the importance of giving proper evidence in court. He pointed to the fact that any police officer can conduct an excellent investigation and prepare the best case-file, but on the day in court, if the officer fail to introduce the evidence to convince the magistrate, the jury, or the judge, the hard work that was previously put into investigating the report will be futile.

Also delivering remarks was course coordinator, Assistant Superintendent of Police (ASP) Trevor Bailey, who said he was pleased with the performance and work ethic of the female officers. He also championed the success of the course, which produced 100 per cent passes with averages ranging from 80 and to high 90s.

It is the objective of the leadership of the RSVPF ensure that each member of the constabulary are trained in areas that are pertinent to law enforcement, through training courses and weekly lectures, so they can better serve the citizens of the St. Vincent and the Grenadines, the Police Public Relations Department said in a statement.

“Commissioner of Police, Renold Hadaway and the rest of the constabulary congratulates all of the female officers who participated in the training course,” the statement said.