Keith Joseph is ‘very much out of his place’ — Leacock 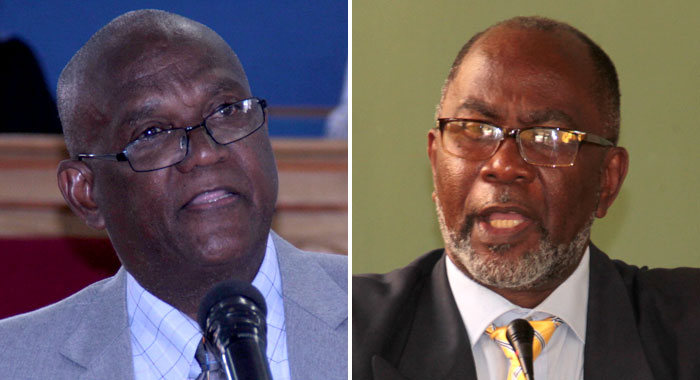 Member of Parliament for Central Kingstown, St. Clair Leacock, has described social commentator Keith Joseph as “out of his place” for comments he made on his “Just Another Look” programme on Saturday.

“That the ruling regime has opted to target Leacock as their object of support within the Opposition NDP, can only be interpreted as a recognition of him being the weakest link within that organisation and commit to the exploitation of that link,” Joseph said in his weekly commentary on the pro-New Democratic Party (NDP) NICE Radio.

He also questioned whether Leacock, an NDP vice-president, is “genuinely committed to the NDP or is he committed to St Clair Leacock”.

Joseph’s comments, like others in the public sphere, were triggered by comments that Leacock made on radio recently questioning the decisions of party leader, Godwin Friday.

But Leacock fired back at Joseph in a call to Boom FM on Monday, saying it was  “very difficult” to hear Joseph admonishing him and making a determination that he is the weakest link in the NDP and asking him for a commitment to the NDP.

“To begin with, I am ahead of every single one of them in the New Democratic Party in terms of membership, including Arnhim Eustace and Dr. Friday,” Leacock said, noting that he was a platform member of the NDP in elections since 1984, “as background vocalist and then as candidate”.

He said he joined the party when it was in opposition and paid a price for becoming its public relations officer while working with a state entity.

“Everyone knows I paid a price for that. I was unceremoniously dismissed in 2001 from VINLEC,” Leacock said, adding that he has never looked back.

“I went and worked for myself, mop and bucket, and here I am here today.”

He said that in Central Kingstown, which he represents in Parliament, the ULP has gained 79 votes over 17 years, while he had added 1,042 over the 1998 margin.

“… I am not the only one. There are several of us who have made a lot, a lot of sacrifice and continue to do so.”

The Central Kingstown MP said he does not like to speak in pejorative way about people, but said Joseph “is very much out of his place.

Leacock’s comments on Monday were the latest in a saga that began two weeks ago when Leacock, spoke publicly on radio about Friday’s decision, apparently, to delay the appointment to the senate of Israel Bruce, the NDP’s candidate for South Central Windward.

In his weekly radio programme on NICE Radio last week Monday, Nov. 27, Member of Parliament for East Kingstown, Arnhim Eustace, who was president of the NDP for the 16 years ending last November, rebuked Leacock for his comments.

Leacock declined to respond to Eustace when he made his weekly appearance on NICE Radio two days after Eustace, but lashed out during his call to Boom FM on Monday.

He noted that NDP president, Godwin Friday, was not in St. Vincent when Eustace was reprimanding him (Leacock) via radio.

“I’m a vice president along with Patel Matthews. Who was in charge of NDP at the time? Because Daniel Cummings was also out of the island,” he said, referring to the party’s chairman.

“And for what? For saying something that should be said and that makes sense? That Bruce should be a senator,” Leacock said.

Leacock again defended his call for Bruce to be made a senator, saying that Bruce has been around the NDP close to 20 years and was selected as a candidate a year ago.

He said that Bruce is doing a lot of work in South Central Windward.

“Whappen? Goat bite him?” Leacock said, adding that last year “they” were putting up Sen. Sherlan “Zita” Barnwell to run against him (Leacock) for one of the vice-presidency spots.

He further said that last year there was an effort to have Julian “Julian” Ferdinand to be leader of the NDP.

Ferdinand ran for the NDP in West St. George in 2015 and lost to the ruling Unity Labour Party’s Cecil “Ces” McKie.

He has since left politics, saying that his workload as a university lecturer does not allow him time to campaign even as the NDP is expecting early elections.

“They can throw me out if they want. I am getting upset about it. What is the party’s position? Anyone else but Leacock? Is that what they are saying?” Leacock said and asked if it is that he must genuflect or be an acolyte of someone to make a contribution to the NDP.

“What more sacrifice must I make for the New Democratic Party than I’ve made? What more commitment I need to have?” he said and asked if anyone is saying that enough is enough and he is important to the NDP.

He said that during the last election, when Eustace was not in the best of health, he (Leacock) was on every platform carrying the banner of the NDP.

“Everything that Dr. Friday is doing now for the New Democratic Party, I did for the last 17 years under Eustace,” he said, adding that no one could have been more faithful to Eustace than he has been and that he continues to be faithful to the NDP.

“This is painful to my family, to myself. And they ask me directly, I don’t have anything else to do with my life then genuflect… I don’t deserve this, for the contribution that I have made to the New Democratic Party.”

“All of my life has been with respect to St. Vincent first and public service and my service, to the extent that the good lord gives me strength, is still available for and on behalf of the people of St. Vincent and the Grenadines and I still remain committed … to the New Democratic Party.”

Joseph also said in his commentary that had Leacock left the NDP and joined the ULP, “he would not dare, as a member of the ULP, to make the unfortunate comments recently made about the appointment of a senator by the ULP’s leadership”.

But Leacock rejected that supposition.

“Well the ULP would have had to throw me out…” Leacock said.