Leacock recants, says ‘We have an effective leader in Dr. Friday’ 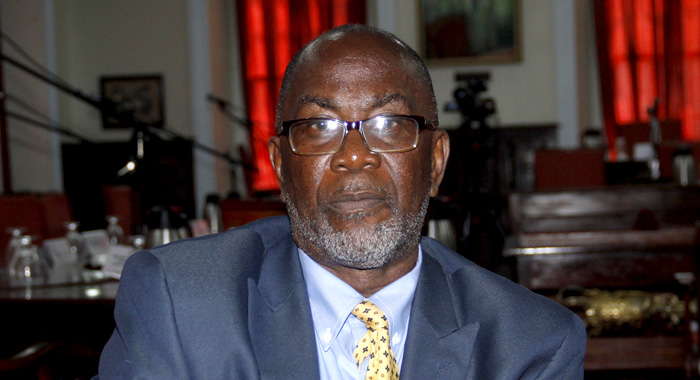 One day after saying he genuinely believes that he is the best person to lead the main opposition New Democratic Party (NDP) at this time, St. Clair Leacock, a vice-president of the party, on Tuesday, recanted and threw his weight behind party leader Godwin Friday.

“… there could only be one leader and we are in the privileged position that we have an effective leader in Dr. Friday and it is for me to be able to demonstrate that as a member of that team, that a part of my job as vice-president is to have his back and to have his back at all times, because when he succeeds , the New Democratic Party succeeds, and when the New Democratic Party succeeds, St. Vincent and the Grenadines is a better place to live,” Leacock said on New Times, the NDP’s daytime programme on NICE Radio.

Friday, who is also Opposition Leader, Leacock, and the party’s other vice-president, Roland “Patel” Matthews, Member of Parliament for East Kingstown, made a joint appearance on the radio programme.

The appearance came after a meeting between the trio at the party’s headquarters in Kingstown, supposedly to discuss with Leacock internal party matters that he had spoken about on radio, amidst complaints that he was not being given an audience within the party.

“We spoke frankly together, it was a chance to understand the basic principles which guide and define each of us. I said what I had to say, he said what he had to say, and so did Patel,” Leacock said on the programme, speaking after Friday and before Matthews.

“It’s not a time for finger-pointing for one-upmanship for either of us to feel that either of us has to give way or concede or compromise what is good for the party. I am impressed with how seamlessly that worked to the extent that all of us recognised that it was not about any of us or for our parliamentary caucus or our executive committee or party groups but it is, fundamentally, about the people, the large number of people in St. Vincent and the Grenadines who have given us and who want to give us the opportunity to be in the corridors of power and to work in their interest.”

Over the past two weeks, Leacock has taken to New Times, and Boom FM on Monday to complain about issues relating to the NDP.

Among other things, he said he was not consulted when Friday decided to appoint Kay Bacchus-Baptiste to replace Sen., Julian “Jules” Ferdinand last month, but he supports the appointment.

Leacock, however, said that he thinks that Sherlan “Zita” Barnwell should have also been removed from the senate and replaced by Israel Bruce, the NDP’s candidate for South Central Windward in the next general elections.

Speaking on Boom FM on Tuesday, Leacock said that the NDP could throw him out of the party if it wanted to because he would not appear before any disciplinary committee if so summoned.

In his New Times appearance on Tuesday, however, he said: “And so, today, as I appear on the radio programme, I really don’t have to offer an apology but I am sorry for those who feel that the loyalty factor that has always been present in my politics and the way I conducted myself and the principles which directed me have dissipated any.

“And I wear proudly on my sleeve commitment to any cause that I have given my attention and I am determined now even more than ever to be of service to those who give me the temporary privilege to represent them at the level of a constituency, namely Central Kingstown.”

Leacock, who has been representing Central Kingstown in Parliament since 2010, said he has, however, always spoken on every opportunity he has “to the big picture of what is good for St. Vincent and the Grenadines, the rest of the Caribbean, and of course, our diaspora.

“And there is no better vehicle [in which] for me to do it at this time and no better crew to be present with and leader and leadership and company than which I am in.”

Since losing the NDP leadership race to Friday in November 2016, Leacock has made comments from time to time that suggest that he is still smarting over that loss.

“I speak so with great sincerity. I speak always with very serious passion and I am not given to be hypocritical in any of my pronouncements,” Leacock said.

4 replies on “Leacock recants, says ‘We have an effective leader in Dr. Friday’”