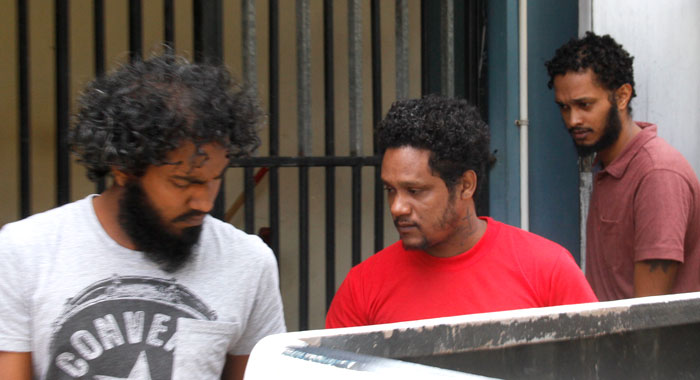 The sentencing of the three St. Lucians who have pleaded guilty to several charges in relation to an automatic banking machine scam carried out in St. Vincent and the Grenadines in March has been postponed for a second time.

The sentencing should have taken place on Wednesday at the Serious Offences Court in Kingstown, one week after they pleaded guilty to the charges.

However, Senior Prosecutor Adolphus Delplesche, told the court that his colleague Karim Nelson, who had represented the Crown in the matter, was unavailable.

Delplesche further said that Nelson had not given him any instructions on the matter.

Chief Magistrate Rechanne Browne-Matthias then adjourned the sentencing to Dec. 18, 2017.

He also pleaded guilty to the charge of having in his possession on March 12, 2017 in Kingstown, articles, namely four ATM cards, for use in the course of theft.

He further pleaded guilty to possession of criminal property, to wit EC$4,250, on the same date.

Mario Chitolie, 25, pleaded guilty to five counts of theft, amounting to EC$2,460, committed in Kingstown, Calliaqua and Bequia between March 10 and 11, 2017.

Harry, Chitolie, and Aaron Kadoo, 30, pleaded guilty to a joint charge that between March 9 and 12, 2017, in Kingstown they agreed with each other that a course of conduct, namely theft, shall be pursued.

Chitolie pleaded guilty to the charge that between March 9 and 12, 2017, at Kingstown, he entered into or became concerned in an arrangement which he knew was expected to facilitate the acquisition, retention, use and control of criminal property, namely monies withdrawn from the Bank of St. Vincent and the Grenadines (BoSVG) and the General Employees Cooperative Credit Union.

Kadoo also pleaded guilty to a charge that on March 12, 2017, at Kingstown, he had in his possession, articles, namely 121 ATM cards, for use in the course of theft.

He also pleaded guilty to the charge that on the same date, at Kingstown, he had in his possession criminal property, namely EC$66,660, contrary to the Proceeds of Crime Act.

Detectives from the Major Crime Unit nabbed Harry committing the illegal ATM withdrawal at the Bedford Street branch of the BoSVG.

They found four white and black ATM cards and  EC$4,245 in cash on his person.

The Crown’s case was that the men came to SVG via boat in March but did not clear with immigration officials.

They are said to have brought with them a quantity of white and black ATM cards that they used to access different accounts at BoSVG and GECCU.